Congressional Republicans are hamstringing another 2nd term Democratic president with an endless series of whipped up scandals and hearings.  Last time, they basically created their “scandal” out of thin air, until the Executive Hummer fell into their laps.  This time, I’m sad to say they have a little more material to work with.  Not much, but enough to run out the clock until 2016.

It’s all they have, really.  The Dow is at record levels, unemployment is decreasing, and the economy is recovering… all things that the GOP said Obama’s policies would prevent.  So rather than admit they were wrong and attempt to further help the American people, they jumped back on the Scandal Bandwagon, to help their own political fortunes in the next mid-term and presidential elections.

The so-called Liberal Media” has been showing how much of a myth that term is by leading with this stuff for weeks, so I’m not going to go into all the details about the three “scandals” going on.  I’m just going to let you know what I think.

Benghazi
This is the oldest of the three faux-scandals; the one the Republicans bring out every so often like a favorite binky.  This one was 100% bullshit when it first came out and it’s still 100% bullshit.  It’s merely a way to tie up the Obama presidency and at the same time, throw some stink on Hillary Clinton, whom they are afraid will run in 2016.  Here’s how you can tell: 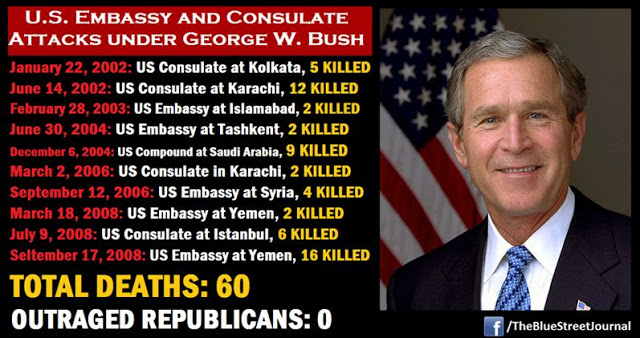 In other words, it’s only a problem if it happens under Obama.  I’m willing to bet you’ve barely even heard about any of those other embassy and consulate attacks.  I know I haven’t, and I’m a news junkie.  If they really cared about lives lost on “American Soil,” it would have been an issue under the Bush administration.  It wasn’t… not even close.

Also note how they never own up to their own culpability in cutting the embassy budgets.  Where’s the investigation into that?  Yes, it’s a tragedy that good lives were lost at Benghazi.  But the lengths the GOP is going to tar the President with it are ridiculous.  This is a grade-A case of “Clean out your own closet first.”

And to make matters worse, it has now come out that the Republicans were providing doctored email transcripts to network news reporters, that casted the Administration in a negative light.  So when the Administration released the full emails and the GOP selective editing was revealed, they were made to look like the partisan hacks they are.  Can there be any doubt about the lengths they will go to make this president (and possibly the next) look bad?

IRS Scrutinizing the Tea Party
At first, I was like, “It’s about freakin’ time!  Why the hell should a party spending money hand over fist trying to cut their own taxes be given tax-free status?”

But yes, I agree that all such filings should be handled with consistency.  It’s un-American not to do so, unless, of course, the Republicans are doing it.

Remember what happened in Bush’s Justice Department?  They had directives (from the top) to pursue election fraud cases, but only where they implicated Democrats.  This was a case of using a government agency to hinder political opponents.  How is that not exactly the same principle as in the IRS case?

There are a couple key differences though… In the Justice case, that was part of an entire re-fitting of the department, where Republicans were brought in exclusively to populate key positions, in what is supposed to be an apolitical organization.  Their orders came from the White House.

With the IRS case, it appears that the extra Tea Party attention started from the bottom, up, in a field office in Cincinnati.  That’s what makes it a stretch to try to tag the President with it.  Sure, he has technical responsibility, given his position at the top, but he had no practical information.

What if I decided that when I go back to work on Monday, I was going to start breaking some kind of banking or financial law?  Technically, the President of our company, with his lavish offices in New York, is responsible, because it’s his company.  But does he realistically have any sway in what I do?  Of course not, that would be crazy.

(And don’t even start with the Democrats blaming the economy on Bush.  It’s entirely too obvious that the economy was Bush’s fault because it was in the tank before Obama was even elected.  The worst the Republicans can say is that he didn’t overcome GOP obstructionism to fix their mess fast enough.)

Even with all this, the President came out firmly against that these IRS agents were doing.  People got fired and I suspect there will be more to come.

Does anyone remember Bush doing anything about the misdoings of the Justice Department?  [crickets]

The AP Scandal
As a former journalism student, this didn't sit right with me until I dug around a little more.  I certainly believe in freedom of the press; it’s the thing that separates us from every grubby dictatorship and authoritarian state.  But then I saw how the AP’s reporting had basically cost us an agent we had on the inside with al Qaeda.

They never published the guy’s name, but described what he had done to prevent an attack.  From there, it’s not hard for even the most ass-backward radical terrorist fuck to figure out who the mole is.

That’s not reporting, that’s potentially costing American lives.  If that particular terrorist cell successfully gets one of their guys on a plane, which could have been stopped if we still had our guy in place, the following death and destruction is on the AP.

There are some things that should not be sacrificed for our “right to know.”  There are plenty of things that can be reported that will make a difference.  Exposing our counter-terrorist efforts is not one of them.

So I don’t blame the Administration for trying to ferret out who’s leaking national security secrets to the press.

And the funny thing is, if they hadn't taken action and the GOP found out about it, they’d be holding hearings on why Obama is weak on terrorism.

Hey! Thanks for the comment on my post. I am coming back, but my progress is painfully slow, with emphasis on the "painfully." I still adore you, though. This is a fabulous post! I wish I had thought of it.

Missed you Judie! Good to have you back.

Weapons of Mass Distraction abound. TV talking heads aid the proliferation with their daily blather, pausing for an occasional nod to the latest salacious murder trial or kidnapping.
Thank you for the useful list of embassy/consulate killings, a nice antidote to present specious outrage. Those tsk-tsking the IRS forget this is J. Edna Hoover's legacy. No one objected to auditing Martin Luther King. If any real journalists remain, their job is to find and report news of use to the public. You are right about our "right to know".

These are the kind of things I don't mind being withheld due to National Security. But I call "foul" when that blanket is used to hide anything an Administration doesn't want out, just because it's embarrassing on inconvenient.

Is it wrong that I just tuned out of all of this nonsense? I know I should care but it's all just so...seriously, what the hell is wrong with everyone?

I can't even with politics anymore. Everyone is just dirty. It pisses me off so hard.

I’m not following nearly as closely as I should, because much like you, I feel like there are more important things to work on right now. But now that the GOP has their teeth into a scandal that they didn’t need to make up out of whole cloth, (for a change), so they’re not going to let go. We will be seeing this shit in the news for the next 3 years.

But at least it makes it quicker for me to read the paper in the morning. (Yes, I still read an actual newspaper.) I hope I don’t have to write about it again, because I can see this post got absolutely no traction.