A Force of Nature

We throw around that phrase around a lot, but yesterday we were shown what a real Force of Nature is.  The tornado that hit Moore, Oklahoma, is the stuff of nightmares, and I should know.  “Tornado” is the Returning Champion of my night-time terrors.  I've probably had the Can’t-Get-Away-From-the-Tornado dream every year or so since I was a kid. 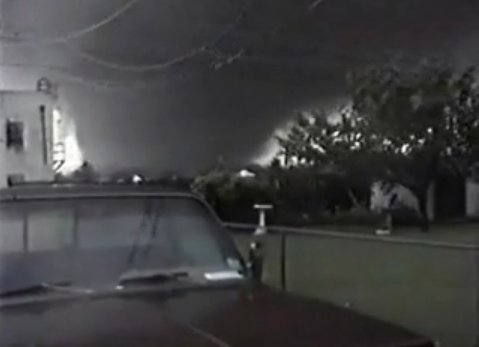 A scene from my nightmares, which in this case happens to be from the F5 tornado that hit Moore in 1999. (source)

I heard about this one while at work, but it seemed like just another twister.  They've been popping up like crazy this month.  But later when I got home and flipped on the TV, I quickly saw that this one was anything but ordinary.  Holy shit!

It wasn't that the footage of this tornado was scarier than any other.  I couldn't get over the vastness of the destruction.  I've never seen a tornado that left such a wide “footprint.”  I mean, 5 blocks wide and 17 miles long??  There’s just nothing left. 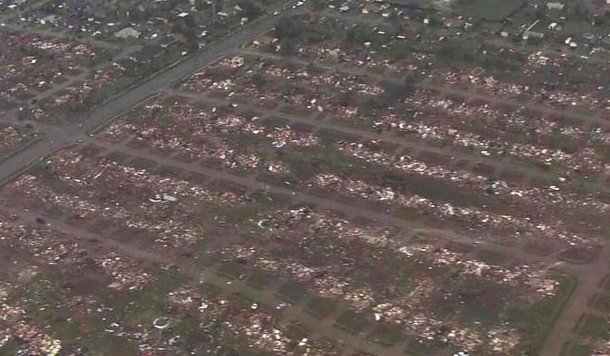 Pictures you see online and on TV look like shots from Syria, or Libya, or Afghanistan.  Our “Shock and Awe” campaigns of the Iraq and Afghan Wars didn't do this kind of damage.

I sat looking around my apartment, wondering, “What would happen if all this was just [poof] gone?”  One minute you have food and plates and furniture and electronics and you’re wondering about your team’s chances in the playoffs, and the next minute you’re trying not to get sucked out of your bathtub and into an airborne buzz-saw   Then you crawl out of what’s left of your house and you have nothing.  No clothes, no car, no mementos, no documents… your life has contracted to the clothes on your back.  If you’re lucky, you were wearing shoes.

What’s worse, there is little infrastructure left to get you back on your feet.  The Home Depot is gone too, as is the grocery store, gas station and pizza shop.  You, my metaphorical friend, are all kinds of “fucked.”

And what do you do with your feelings?  There’s no one to blame for your misery, and there’s nothing Americans like to do more than blame others for their own misfortune.  But this time there are no terrorists, no warring country, no “socialist” government or giant corporation … there’s nowhere to direct your anger.  It’s Nature’s way; shit just happens.  Turns out, the bumper sticker is right.

It’s tough for us to accept mankind’s limitations.  As a people, we’re so used to getting what we want, it’s hard to stomach not being able to avoid this kind of destruction.

A tornado is ruthless, pitiless, remorseless, unforgiving and resolute; moving ever onward for as long as it cares to, regardless of what you do, like it’s Nature’s own personal Terminator. 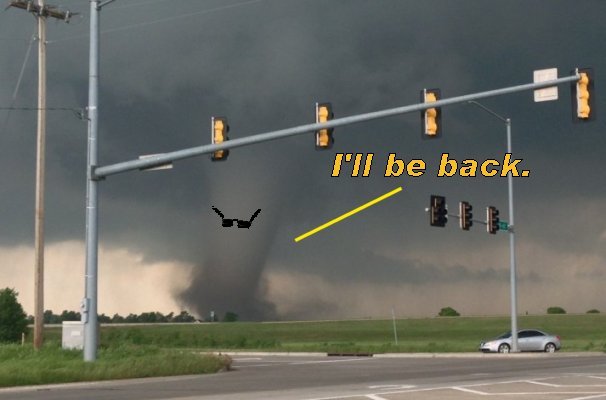 George Carlin once made the point in one of his HBO specials, about the inherent arrogance of our thinking we have to save the planet.  He said, “The planet is fine… it’s not going anywhere… WE ARE!”

It’s like every so often, the earth needs to remind us who’s really in charge.  Suffice to say, it’s not us.

While tornadoes scare the hell out of me, I still find them fascinating to look at.  I tell you, when they made the movie “Twister,” it was with dudes like me in mind.  I mean, I hate the things, but I can’t look away either.  My stomach does flips but I keep watching anyway.

I couldn't watch too much of this tornado coverage though.  Schools, hospitals, shopping centers, rows and rows of homes, all obliterated.  I just couldn't deal.  To cheer up, I put in the new DVD for Season 7 of “Dexter,” instead.

It’s sad when a show about a fictional serial killer represents a step up from the real world.

Fundraising drives to aid the people of Moore have already been started.  I recommend that we find one we trust and make a donation.

One of them ought to be called, “Fund for the Fucked.”  I smell a telethon…  Conan O’Brien can host.
Posted by bluzdude at 6:40 PM