First, please let me apologize for not posting last night.  As you’ll see, I didn’t get home until late.  But on the bright side, you've had an extra day to savor the richness of Friday’s post about farts.

I’m kind of jammed up this week.  I had 2 baseball games in addition to the next round of Penguins playoff hockey starting.

All this started with my ticket-buying jamboree back in January.  One of the Orioles games I picked to attend was the one last night, against the San Diego Padres.  I like seeing the interleague games, and I’ve only seen the Padres once in my life (according to my tracking spreadsheet) so it seemed like a good choice.  Naturally, it turned out that the Penguins also played Game 1 of their 2nd round playoff series on the same night.  Hello DVR!

In a separate story line, my old boss, Don, and I have wanted to go to an afternoon Orioles game together ever since I joined the department in 2006.  After a couple of false starts in previous years, we took a look at this year’s schedule and saw that they only play 3 afternoon games at home all year.  One was in April, one is in June, and the other is today.  We picked today, so that in case anything goes wrong, we still have another shot in June.  That’s how I ended up going to back-to-back, day/night baseball games.

So, I went to the game last night with Sitcom Kelly.  We met up at our usual pre-game spot, a bar called The Bullpen (right across from Camden Yards).  I always get some food from the street vendors before a game, so I got myself a nice giant hot dog, probably to make up for missing out on The Big Wahoo last week.  That was all I really needed… I was trying to cut down… but then I saw the cheeseburgers and they just looked so good, I couldn’t help myself.

Sitcom Kelly joined me as I was eating them at the bar.  As she saw what I was eating, she asked if I was still going to help her with the cheese pizza she always got.

Oops.  I forgot about that.  I definitely shouldn’t have gotten the cheeseburger.  But I couldn’t let that stop me from helping a friend in need.  But trust me; I paid for that transgression this morning with an urgent, unscheduled intestinal event.  (As in, “Everybody OUT!”)  What kind of world do we live in, that you can’t trust food cooked outdoors by people you wouldn’t let wash your car?

Anyway, we tried something new with our seats this time.  We found that you could get outfield club level seats for the same price as the ones in the lower left field bowl (where we usually sit).  We’re farther from the field with the club seats, but they still have their advantages.

First, you have a better perspective on the game, by sitting up a little higher.  But more importantly, you don’t have to mix with the riffraff from the cheap seats!  They won’t even let you onto that level unless you have the correct ticket.  Hah!

Anyway, this was the view from our “exclusive” club seats. 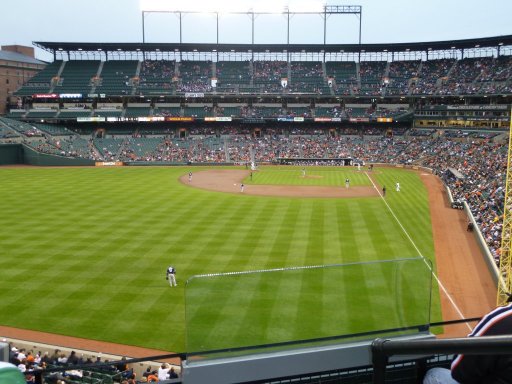 There weren't many people in our section, only about 10 at most.  That’s Sitcom Kelly there in orange in the 3rd row.  My seat was on the aisle. 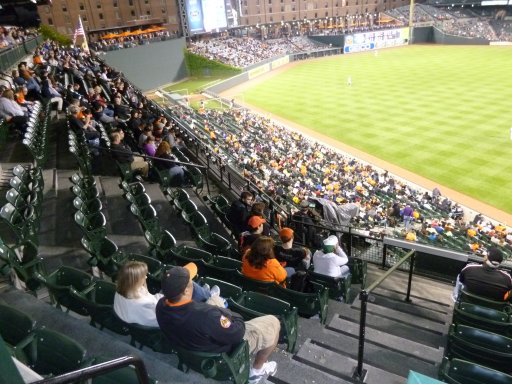 All day long, I kept checking the hourly weather report on Weather.com.  All day long it said, “0% chance of rain.”  So naturally, it began raining around the 2nd inning.  It wasn't much, but enough for me to go, “WTF?  Zero percent?  How the hell does it rain when there’s ZERO PERCENT chance of rain?”

It stopped and started, and didn't really amount to much, until around the 7th inning. 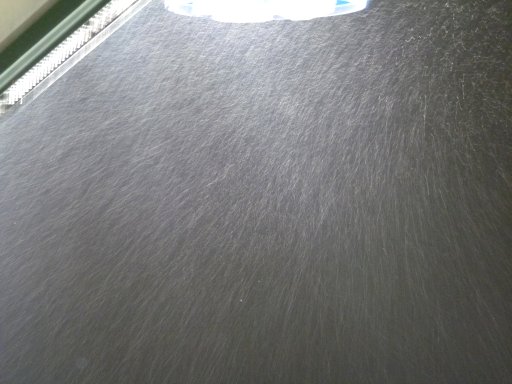 
At orioles game. Zero percent chance of rain in forecast. It's raining. #WhyMe
— bluzdude (@DarwinfishBluz) May 15, 2013

Because the game was lightly attended, we just moved back to the last row, so that we stayed dry under the overhang.  But all game long, I kept looking up, saying to Sitcom Kelly: “Zero percent?  Zero fucking percent??”

I was not amused.  In fact, I want a personal explanation from Jim Cantore. 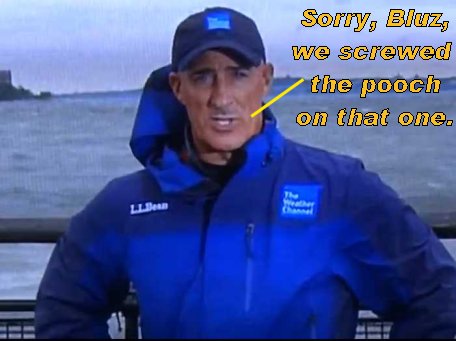 Just for that, I expect you to keep the hurricanes away from my parents for at least another two years.

The camera guy knew it was going to rain. 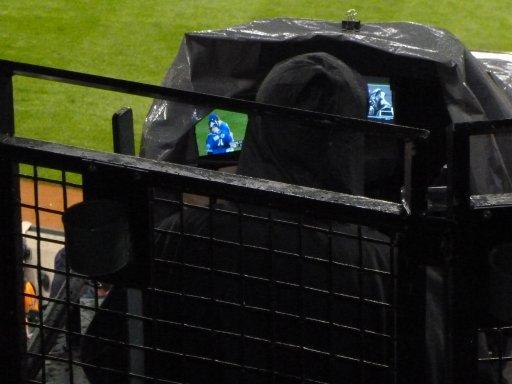 I wonder where he got his information.  We were right behind him, so it was kind of cool to watch him work.  The monitor on the right is what he sees; the one on the left is what the TV is showing at the moment.  At least that’s how I remember it from my college TV Production class.

As for the game, it went by pretty quickly.  The O’s took a 2-1 lead in the bottom of the 8th, then their Closer blew his first save since last July, and the Padres scored 2 in the 9th, to win 3-2.  I was just happy the game didn't go to extra innings, because I was antsy to get home and watch the Pens game.  I mean, I would have left anyway, but I was glad I didn't have to.

It was the 2nd time this year that I wore my new Manny Machado jersey and white-front cartoon bird hat, where the Orioles lost, so I won’t be sporting that combo again anytime soon.

I was able to watch the entire Pens game in an hour and a half, thanks to the DVR and being able to fast-forward through both intermissions, every commercial break and stop in the action.  (Whoo Hoo!  Pens win 4-1!)

Now for today’s game, Don said he always wanted to go sit in the sun in the outfield for a weekday game, and enjoy a hot dog and a couple of beers.  You know, “Ferris Bueller” it.  So last week I got tickets in my usual spot, 2nd row behind the left field wall.  Rather than schlep another jersey into work, I just went with the Traffic Cone Orange Orioles polo shirt.  The weather was not supposed to be an issue, with not much sun but temps expected to be in the low 80s.

The crowd was weirdly arranged. 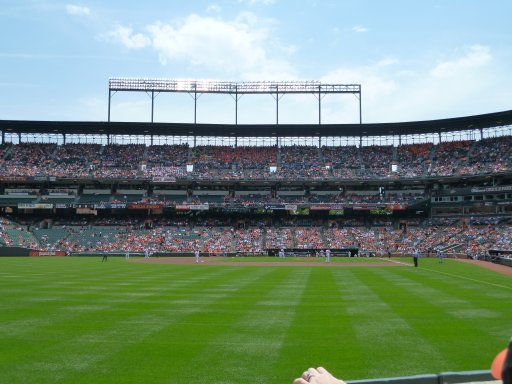 The view from our seats.

When do you ever see the upper deck full with the lower bowl half empty?  This is what happens when it’s “Field Trip Day” at the ballpark.  The upper deck was crammed with school children, which was excellent, considering I was in the lower deck.

Naturally, with over 32,000 on hand to see some beautiful daytime baseball, it rained.  Not hard, mind you, but just enough to piss me off, like nature was showing me who’s boss.

It would sputter and drizzle from time to time, even while the sun was shining.  But then in the 4th inning, we saw the grounds crew come pouring out of their nest and line up behind the field tarp.  One of them unfastened the covering at the end.  It looked like they were expecting something harsh and were preparing to roll out the tarp at a moment’s notice. 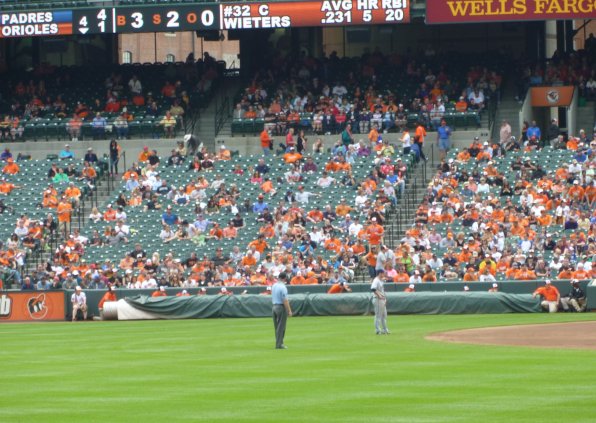 I said to Don, as soon as it starts raining again, lets move back into the concourse.  No sense getting soaked, right?  So it starts raining and we retreat, but we don’t go to the concourse, we grabbed some seats under the overhang.  A few minutes later we looked and there was no one out at the tarp anymore, and it was all buttoned up.  WTF???  We went back to our original seats at the next inning break.

Just goes to show, whatever decision I make this year turns out to be the wrong one.  Suddenly I’m the walking, talking, blogging personification of Murphy’s Law.

It was funny around 2:30, half of the upper deck seemed to disappear.  We learned that a lot of the kids had to be back at their schools by 3, so they could catch their bus home. 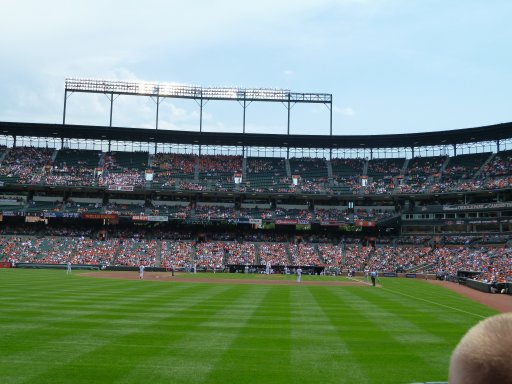 Is the upper deck half full, or half empty?

Anyway, we had a decent enough time, watching the Orioles lose again, this time by a score of 8-4.  San Diego racked up 17 hits on the day.  We certainly got our money’s worth of baseball action.  But I tell you, I've been to 3 O’s games this year and they've lost all 3 times.

I think they should start paying me to stay home.  My presence is NOT helping the team.

Or maybe I just haven’t found the right jersey and cap combination yet. 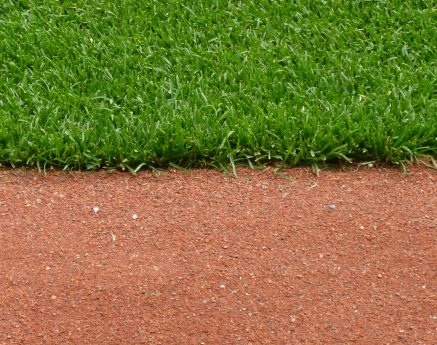 Just in case you ever wanted a good look at a ball field’s grass and warning track…
Posted by bluzdude at 7:02 PM