Apparently this story has been out since December but it must have blown right by me.  While I was on vacation, my mom showed me this news clip from New York Times Magazine.  It seems a claims adjuster, for the Social Security Administration here in Maryland, received an official reprimand for alleged serial flatulence in his cubicle.

“A manager cataloged 60 incidents over 17 days (by date and time), noting the ‘unpleasant odor’ and claiming the offender was creating a ‘hostile work environment.’  The complaint was quickly rescinded once the higher-ups caught wind of it.”

You can read a more robust account of the situation by clicking here.

First of all… Ahhhhhhhh HAHAHAHAHAHAHAHAHAAAAAA!  Yes, farts are still funny and they’re even funnier at work.  Well, someone else’s work, anyway.  (And if you don’t agree, you’re probably not going to like the rest of this post.)

Secondly, I feel sorry for the poor guy.  (And was there ever any doubt it’s a guy?)  The cubicle walls over at Social Security must be really low, because like 100% of mankind, I have to pass a little gas at work sometimes too, and it’s never caused a commotion.  And I've never noticed anything drifting over from other cubes except the occasional spicy lunch.

I want to know about the boss.  Is this her dance, or is she reacting to staff complaints?  Who would actually take the time to chronicle the date and time of each “disturbance?”  It makes me wonder if she had a “smell” rating as well.

I’m assuming the manager is a “she.”  No self-respecting dude would write another guy up for farting, unless he was strolling into someone else’s cube and dropping one on her head.  And even then, he’d probably give the guy a high-five first for the sheer audacity.

The manager here suggested the guy take care of his gassy business by going to the rest room.  Seriously.

That sounds like a Dilbert-esque management suggestion if I ever heard one.  First of all, if the guy is the serial farter they suggest he is, that’s going to be an awful lot of trips to the can.  Plus, when you have one in the chamber, it’s not terribly easy to go walking around.  You end up looking like an extra from March of the Penguins.  And chances are, if you do make it all the way to the bathroom, your “bullet in the chamber” has already gone back the way it came, to nestle in your innards until it decides to re-emerge at a much more embarrassing time..

This guy needs to work on his strategy a bit.  There are ways of off-loading a little methane without napalming your co-workers.  The first option is to try a little “crop-dusting.”  That’s when you walk through an unpopulated area of the floor and release your payload bit by bit.  But you have to be careful… you have to stop and linger every so often, or else your exhaust will follow you back to your desk.

I had an incident happen to me once, but I managed to get out of it unscathed.  I was having an epic gas attack (before I started keeping Gas-X in my desk).  I went to go crop-dusting, but I failed to linger anywhere.  So as I was walking back to my desk, I got stopped in the aisle by one of our office gabbers.  As he was getting into another pointless story about his cat, he caught wind of my vapor trail.  He was like, “and then he was licking his… Hey, do you smell that?”

I was all deer-in-the-headlights, until he said, “Oh, that must be Mary’s baby.  Now why couldn't she change him in the restroom?”

When he threw me that lifeline, I’m not ashamed to say that I grabbed it.  Thank goodness one of our managers had her baby in the office that day… it totally took the heat off me.  That’s an underrated quality of pets and children… blame receptacles for passed gas.

Elevators are another trap.  Obviously you don’t drop one in the elevator when there’s anyone else onboard, unless you’re a sociopath.  But even if you’re alone, it’s best to cork it.  You never know who’s waiting to get on as you’re getting off.  And when you’re the only one on the elevator, there is no one else to blame.

If you must use an elevator, here’s what you do… you wait until you get to your floor and the doors open.  Then, if no one is waiting to get on, hold the doors open, fart for all you’re worth, and then release the car.  It will make for an ugly surprise for the next rider, but you’ll be off scot-free. 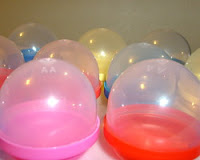 Farts will keep, too.  That’s one of the best things I've learned by writing this blog.  Someone once commented that when she was a kid, she and her brother learned that they could fart in those little plastic bubbles that grocery store coin-op machine prizes come in, and then cap them.  Then even months later, when they opened the plastic bubble, the fart still maintained its original characteristics.

All I can say is that the people in my old neighborhood should thank their lucky stars that my brother and I never discovered that little fact when we were kids.  The next logical step would have been to figure out a way to ignite the gas.  Our neighbors were lucky they never had to witness what would have become known as The Great Flaming Gas Wars of 1975.

My brother was a bomb-dropping maniac back then.  He could clear a room with the best of them.  I swear he was part skunk, because he could use gas as a defense mechanism.  We’d be wrestling around and when I pinned him, he’d fart.  It’s probably an evolutionary mutation meant to compensate for being a younger brother.  It’s no surprise that his younger son does the same thing to his older brother too.

But they’ll never touch The King.  My brother was actually bestowed the title of The Fart King by his buddies.  Back when we took annual trips to Cleveland for the Browns/Steelers games, he would drive out from Baltimore with his friends.  And what happens when you get a bunch of young guys cooped up in a car together for 6 hours?

Some of the guys even “trained” for the occasion, by loading up on beans and stuff.  All my brother needed to do was pick up some Burger King onion rings and he was good to go.

One time the contest started while my brother was driving.  When it came to be his turn, he child-locked the windows before opening fire.

As his friends clawed at the windows and screamed for mercy, he said, “Say I’m King.  Admit I’m The King and I’ll open the windows.”

Some Kings have a Coronation.  My brother had a Ventilation.  After that trip, he told me, “There is nothing more satisfying than dropping a bad one and then looking in the rear view mirror and seeing everyone hanging their heads out the windows.”

Now, I know women fart too.  My mom was known for what I dubbed the “Motherly Oops Fart.”  She’d be off in the kitchen while we were in the other room, then we’d hear a 5-second, multi-tonal fart, followed by “Oops.”

My position was than no one gets to say “oops” after a performance like that.  I’m sure there had to be some wild gesticulating involved in order to produce that much sound and fury.  I just can’t see that happening accidentally.

When I was married, Future-Ex would NEVER admit she farted.  Hell, she denied she even had a digestive system.  As far as she was concerned the butthole was for decoration only.

I caught her one time.  We were sitting around the den and she just farted, quite audibly.  She must have forgotten I was there.  Anyway, I looked at her with an expression of shock and amusement.  She looked back at me, eyes as big as saucers, and just shot her arm out to point at the cat.  If only it had been a jungle cat we were keeping instead of a tabby, I might have bought it.

It’s funny how when you’re in a new relationship, you’ll do anything to keep from farting in front of your beloved.  I remember when I was dating my college girlfriend, I’d go over to her house for dinner and we'd end up in their family room, along with her whole family, until late into the evening.  Sometimes I’d have to fart so badly, but I didn't dare.  I’d shift and squirm, but damned if I was going to allow any “escapees.”

At the end of the night, we’d kiss goodnight and I’d go on my way.  Once the door closed, I’d practically skip all the way down to my car on the street, carpet-bombing the walkway as I went.  I’m surprised my feet even touched the ground.

What I didn't know until years later was that on the other side of the door, my girlfriend would be doing the same thing.  She’d slam her back against the front door with her arms outstretched, and bellow to her mom, “Oh thank Christ; I've been saving this up all night!”

Wouldn't it be easier on everyone if we all just came to some kind of accommodation?  Trust me, dates and relationships would go smoother and the Social Security Administration would be a much less “hostile environment.”

Look, farts are funny.  Always were, always will be.  My mom taught me that fact when I was but a boy.  One of the first jokes I ever learned was one of hers…

“A man was visiting the royal palace and as he was talking with the King and Queen, he let out a loud fart.”

The King thundered, “How dare you fart before my Queen!”

To which the guy responded, “I didn't know it was her turn.”