Call Me the Breeze

First off, please accept my apologies for going dark since Friday.  I intended to drop a post or two while I was on vacation, but I just never got around to it.  Whattya gonna do?

As you saw from my prior post, we got in just fine.  There were no lost bags, bumped seats, FAA labor shortage delays or terrorist threats.  We hit the ground and walked right into beer and pork chops. 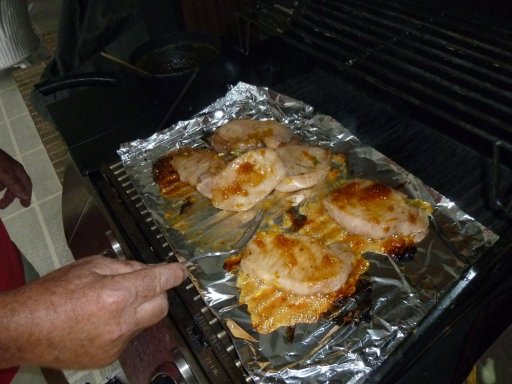 It seems like all we did for 5 days down there was eat and drink!  Not that it was a bad thing… it’s just more than I’m used to. 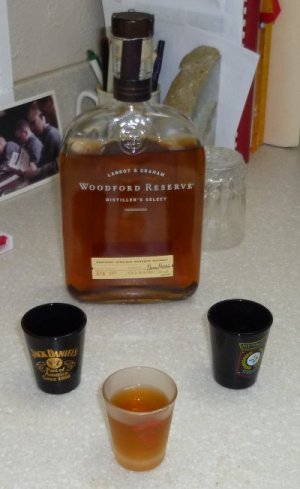 Not our usual Jack Daniels, but I’m always willing to branch out.

We’d go out for lunch or something, like Friday at the Chinese Buffet.  Normally with a lunch like that, I don’t eat dinner.  But there we were later, eating at the ballgame.  It was a regular “Mangiapalooza.”

Maybe we ate so much because the weather didn't really cooperate.  Normally when we visit in early May, it’s gorgeous out, with highs in the upper 70s and lower 80s.  This time we got rain early in our stay, and high winds for the rest of the time.

As I suspected, my touch with advance tickets has not improved.  I could have picked any day to go see the Double A league Pensacola Blue Wahoos, but I picked Friday.  This is what Friday looked like, as we approached the ballpark. 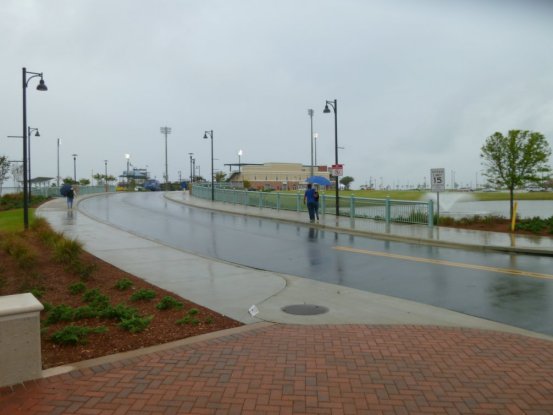 And this was what was on the horizon: 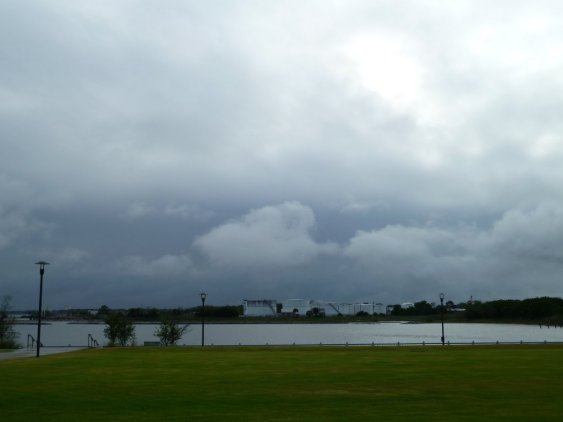 We knew there was a big rainstorm coming from the west, but the TV news assured us that it wouldn't be there until around 9:00.  I think they were in cahoots with the ball club and trying to coax some butts into the seats on a crappy night.  There was a constant drizzle, like a hard mist, that fell almost the entire night.  It really put a damper on things.  It was a shame, because we had some good seats; first row on the third base line, in the outfield. 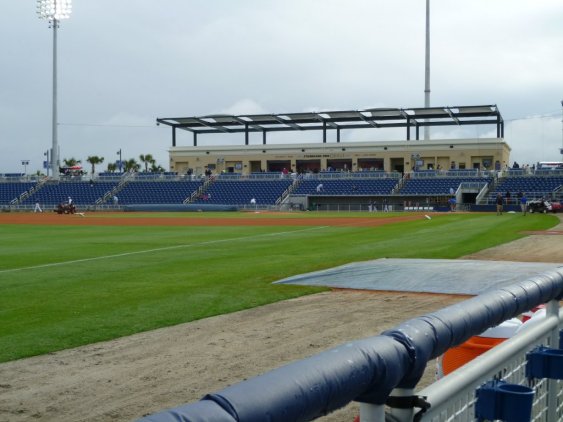 This was the view from our seats. 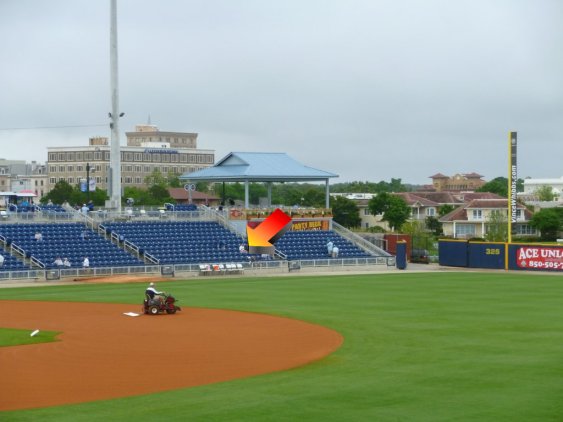 Those two little dots are my parents, waiting for Pinky and me to come back from our pre-game mosey.

Last year, we took a walk around the ballpark when there wasn't anything going on.  It was then that I discovered they had a hot dog called “The Big Wahoo.”  Now after our big Chinese Buffet lunch, I didn't really need to eat, but I did want a look at a Big Wahoo.  So when Dad went up to get snacks, I told him Pinky and I would split one.

Unfortunately, there was some kind of mix-up at the concession stand.  Not only did it take 20 minutes for them to hand over a hot dog and a grilled chicken sandwich, they said the Big Wahoo was a fish sandwich… the very blue wahoo for which the team is named.

Since we’d already spent over 4-times the amount of time it should take after ordering, we just ate the fish sandwich.  But it bugged the crap out of me that they denied the existence of the Big Wahoo hot dog.  In fact, as we walked back to our seats, we went right by the stand where it claimed the Big Wahoo was “the largest hot dog you've ever seen!”  But like I said, we didn't want to fight about it.

Once the game started, the drizzle never stopped, so we left after two innings.  (We had DVRed the Penguins playoff game, so we had that to go back to.)  But the night wasn't a total loss… I got another baseball!

Well, I should say my dad saw a batting practice ball lying on the ground in the stands, so he picked it up and gave it to me.  Isn't that what you’re supposed to do?  A guy gets a ball and he gives it to his son.  OK, maybe the Statute of Limitations for us has run out.  But it was also Blue Wahoo “Snap Koozie” Night, so I came home with a pretty nice haul. 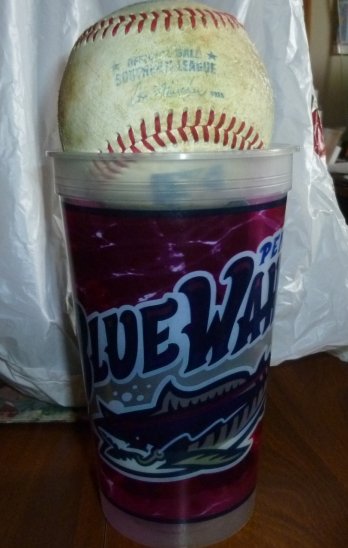 My Southern League trophy ball, with collectible Blue Wahoos beer cup.  See?  The ball came with its own cup holder. 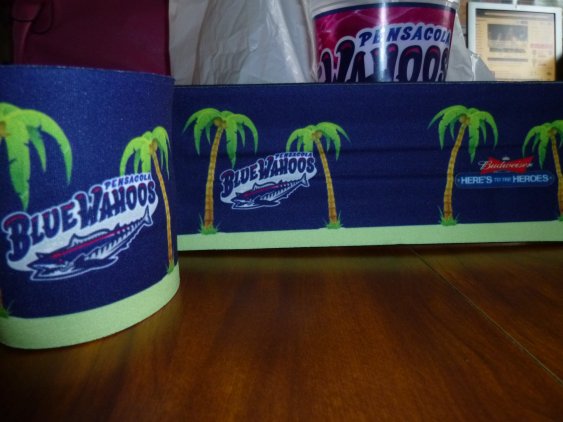 Blue Wahoo Snap Koozies.  (In other words, foam strips with metal bands embedded inside.  They wrap around your bottle or can, to keep it cold.  Also, “The Snap Koozies” would make a great band name.

Saturday was Kentucky Derby Day, so we stuck close to home.  It was sunny out, but there was a steady 15-20 mph wind blowing, so it wasn't terribly conducive to sunning or swimming.  So Dad and I had iPad class, where I showed him some handy keyboard tricks and other useful things, and together we figured out how to iMessage and use FaceTime video conferencing.  (It’s easier to figure out when the two users are in the same room.)

In return for my services, Dad showed me the Bubble Explosion iPad game he plays, which then occupied about 75% of the rest of my stay.  I don’t know why, but there must be something innately satisfying about popping brightly colored bubbles, because it sure is addicting.

On Sunday, we ventured down to the beach for a little sightseeing before dinner.  They recently put up a giant Ferris wheel, so we thought we’d take it for a spin. 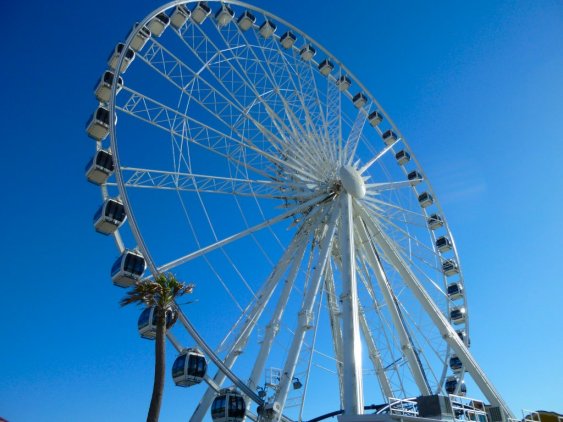 I know there is no scale, but it’s a big one… about 20 stories tall.

It certainly provided a nice view of the beach area. 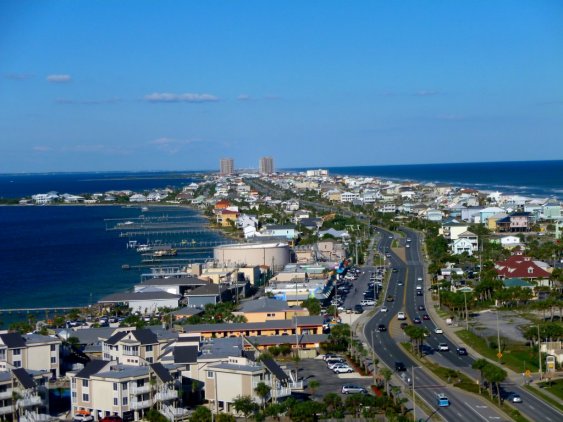 Left side: Pensacola Sound.  Right side: Gulf of Mexico.

What cracked me up was the warning sticker on the inside of each car.  I don’t know what the hell they were warning me about… I could only guess. 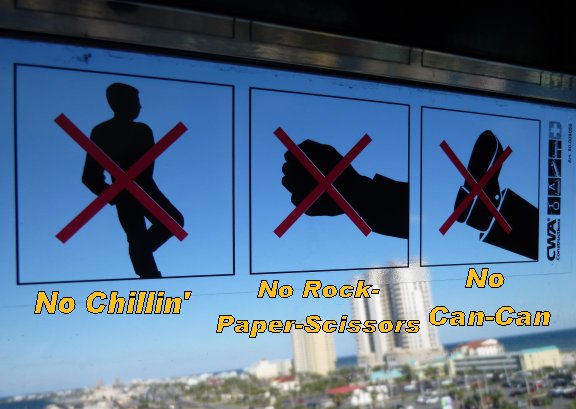 Sunday started with the Penguins playoff came coming on at 11:00 AM.  You gotta love Central Time.  Afterwards, we went back to the beach, but it was still too windy to go in the water.  They had the yellow flags out, which were starched, most of the time. 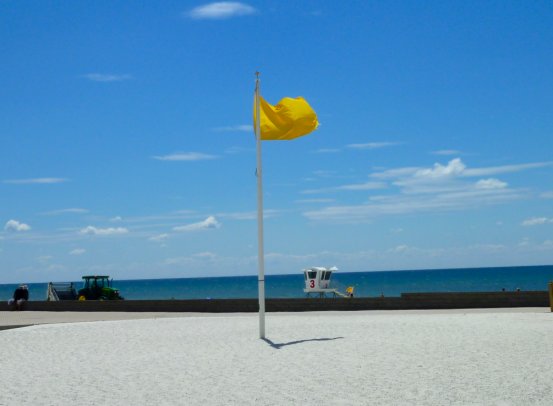 They have a nice, long fishing pier, which makes for a nice walk. 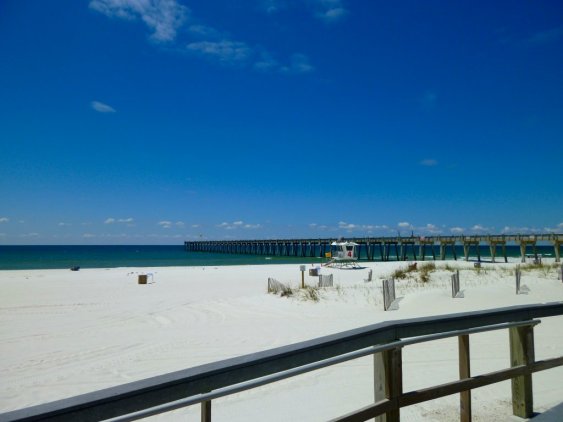 You can’t really see it, but this guy just landed a fish, which is vigorously flapping around in front of the blue cooler. 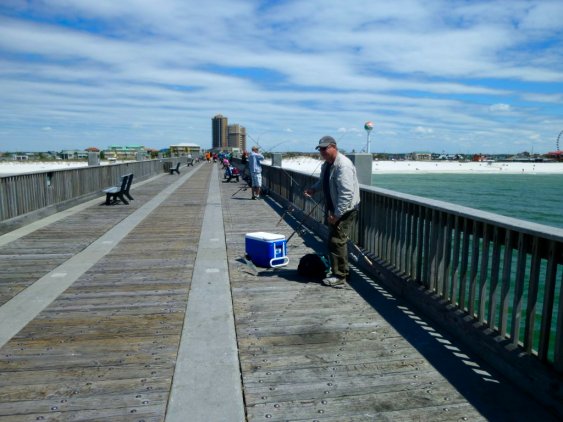 What is it with Pensacola and their “Rules” signs? 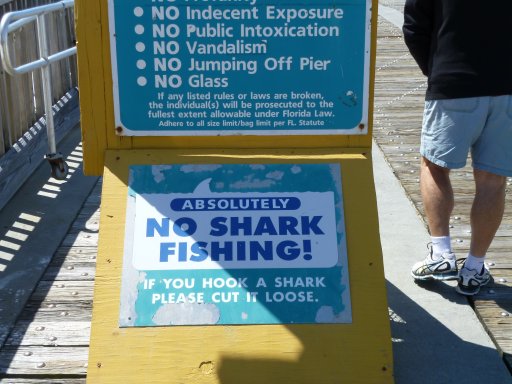 Dammit!  There’s nothing I like better than getting drunk, naked and catching "Jaws"… followed immediately by defacing this sign and jumping off the pier.

After our stroll, we had lunch at a place called “Flounder’s.”  It was a pretty interesting place to look around. 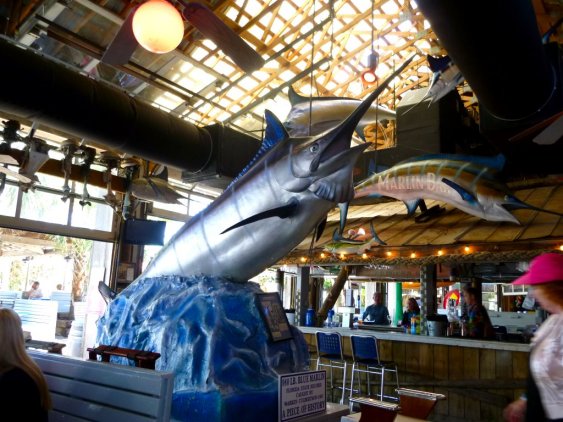 TGI Fridays called and said the place was too “busy.”

By the way, that’s a replica of a 980-lb blue marlin that was caught nearby in 1985, which remains a Florida state record.  Also note the row of outboard motors that ring the ceilings.  If that restaurant ever sinks, they can just fire up those motors and putter along to the next location.

I should have taken a picture of the key lime pie, which was too much for even 3 of us to share; not that we didn't try.  But instead, I got this shot of a giant clam. 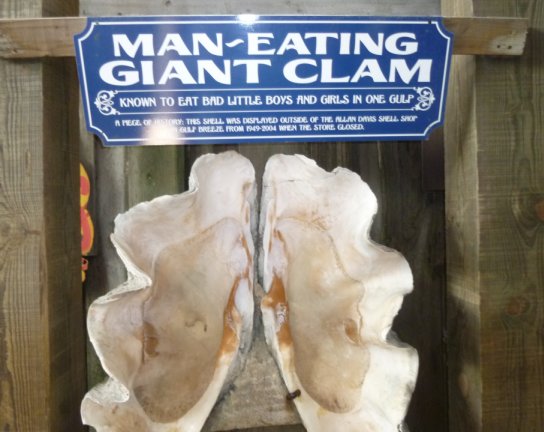 That’s one way to make your kids behave in the restaurant… threaten to feed them to the giant clam.

In order to work off all the meals, I have a very strenuous exercise regimen... I crush cans.  OK, I cheat by using a can crusher.  But it's one of my favorite parts of the trip.  As soon as I have my own house, I'm totally getting one. 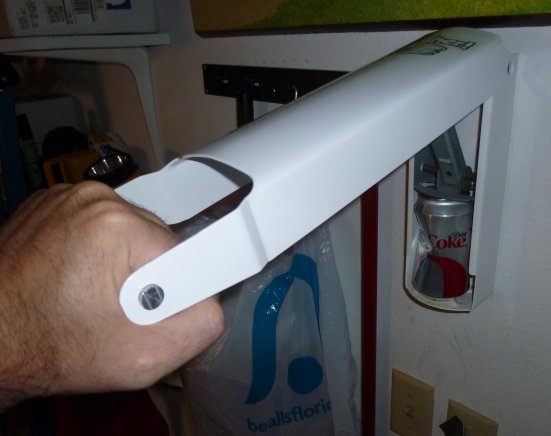 Step 1: Dimple the can and place it in The Crusher. 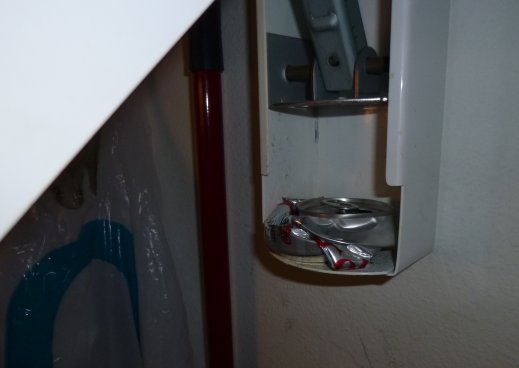 Step 2: Pull down the lever to reduce the can to a little itty-bitty thing.  Nothing like doing my part for The Environment!

Finally, on Tuesday, we had some glorious weather, which is predicted to stay around all week. 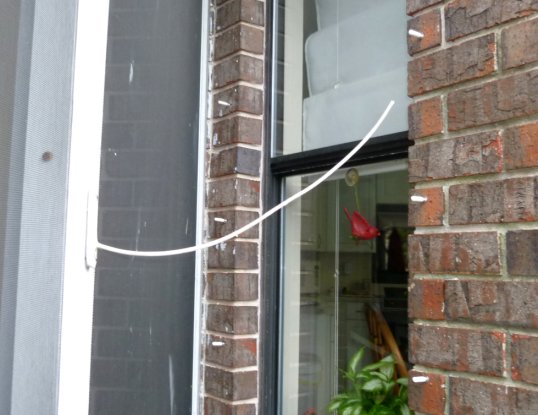 Even the Weather Stick was glad to see a nice day.

Unfortunately, we had an 8:30 AM flight out of town, so we got to enjoy exactly none of it.  But it’s nice to know it’s there.

I’m glad I took Wednesday off though.  As relaxing as vacationing with my folks is, I also need a day to recover. 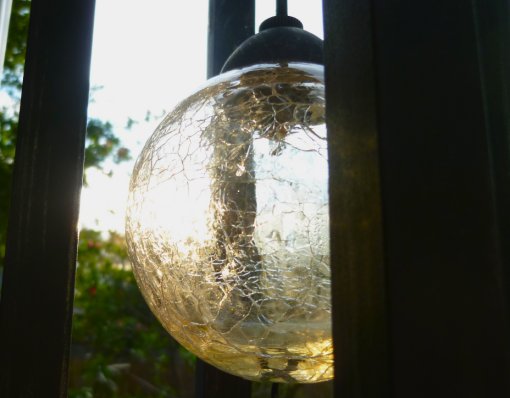 1. ABSOLUTELY NO EATING
2. Do NOT Open the Frig
3. No Thumbing Through Cookbooks
4. DO NOT Look in the OVEN
5. NO Checking the Medicine Chest for TUMS
6. Do NOT Burp Just for Old Time's Sake
7. NO Pictures of Food
8. Do NOT Sniff Old Pizza Boxes

Aw, I love old pizza boxes... They're the gift that keeps on giving...

OMG... That Ferris wheel is probably the most horrifying thing I have ever seen!! If its one fear that could take on my clown phobia, it's my fear of Ferris wheels!!

Now, I would have pegged you for being put off by the Man-Eating-Clam. I don't get the fear of Ferris Wheel... Especially this one because the cars are completely enclosed; unlike those rickety ones at carnivals. This was like taking a spin in your living room (if you had stiff, uncomfortable furniture).

Damn, Val, you're really starting to hamper my ability to plan for a good time when you visit!! :p

Well, well, well . . . I see your stroke of bad luck continues with game outtings. You haven't made your sacrifice at the alter of THE RAVENS yet, have you? You're really only hurting yourself by this stubborness.

And I totally get those warnings. They say:

You don't fool me. You could never stand to do that much "nothing" for a week. You'd have to go run a 5K or build a patio set or something.

What are you saying? I'm perfectly willing to sacrifice a raven! Eager, in fact.

Meanwhile, I have O's tickets for next Tuesday... I'll have to see what atrocity awaits me there...

Gosh dang it. See, I think my iPad posts comments, it pretends it does, but then I go back to check and nothing is there. So aggravating!

I think what I originally posted was something along the lines of "I'm sorry the weather kind of sucked, but it's hard to be too sad when you're in Florida. We're headed there in just over a week and I hope it's perked up by then. I can't wait!"

Yeah, I've had that happen to me too. I think the modem eats them.

I'm told the weather in Florida, at least on the panhandle, was brilliant for the rest of the week, right after we left.

Despite the weather, it sounds as if you had a good time. Love the various pictures; can't pick a favorite, though the shark/clam ones are certainly up there. (And the can crusher has given me a good idea for a Father's Day gift for the hub.)

I am pretty sure all your recent game annoyances played into the Pens winning the series. Because what each and every one of us does affects the outcome, as we well know. :-)

Yeah, I take full responsibility for the Pens' Game 2 loss, because while I wore a Pens pullover and polo shirt to the baseball game (while they hockey game was going on), it wasn't a jersey.

I just hope they don't play Game 1 of the next series on Tuesday, because I have Orioles tickets (also bought well in advance, in January).