There was bad news in the Baltimore sports world yesterday as Orioles 3rd base phenom Manny Machado suffered a serious knee injury during an afternoon game.  Manny was running out a ground ball when he stepped on the edge of first base, twisted his knee and fell to the ground in a heap, clutching his knee.

I didn't know anything about it until I got an email from Sitcom Kelly last night, asking me if I’d seen it.  It didn't take me long to find something online, and I kinda wish I hadn't.  The article was preliminary, because they won’t know anything concrete until they can get an MRI, but I've seen enough torn ACLs and MCLs to know that this is a bad one.  The link above contains a video, if you’d like to see for yourself.  It’s not that it’s gruesome… I've seen worse, like years ago when Pirates catcher Jason Kendall broke his ankle on a similar play at first base.  But Manny’s knee got a pretty good twist.

I feel so bad for the kid… and he IS still a kid.  He just turned 21 this summer, in the midst of turning major league baseball on its ear.
I don’t think I've ever seen a player make so many head-turning plays in the field as Manny has.  I read that he’s had more plays on ESPN’s Web Gems highlights than anyone else, by far.  And this is Baltimore, home of Brooks Robinson, who may have been the best fielding 3rd baseman of all time.  People here know from talent at the hot corner, and this guy is king right now.  (Just check YouTube for Machado highlights.)

Manny’s joining the team late last year was the single biggest component of turning the club into a winning team.  The Orioles now hold the best fielding percentage in the league and are on pace to crush the record for least amount of team errors.

It’s such a shame, not just because of on-field issues, but he’s a genuinely good kid!  His teammates love him, he studies hard, reveres his elders, keeps his mouth shut and does his job with grace and humility.

Obviously he’s done for this season.  I just hope he can come back before the end of next season.

So between Manny’s injury and the horrific season my Steelers are having so far, (they’ll be lucky to go 4-12), it hasn't been a very rewarding Fall thus far.  But leave it to the Ratbirds to put a smile back on my face.

Did you hear about Raven’s wide receiver, Super Bowl star, and Dancing with the Stars 3rd place winner Jacoby Jones?  Last night, he was with teammates on a “stripper bus” in Washington DC, celebrating lineman Bryant McKinnie’s birthday, a stripper named “Sweet Pea” clonked him on the head with a giant champagne bottle and ignited a brawl.

He was apparently bloodied up pretty well, but was none the worse for wear, and refused medical treatment.  When the police asked him how he got hurt, he said, “I don’t know.”

Hah!  As if you could possibly forget when a stripper hits you with a bottle of bubbly. 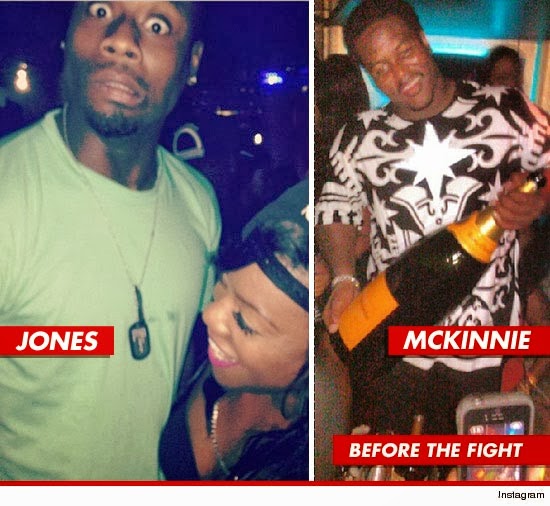 You can find more pictures of the people involved by clicking here, as well as some more salacious coverage.

But what I want to know is what did Jacoby do to earn Sweet Pea’s wrath?  Is there some kind of protocol for stripper buses?  Did he bogart the giant champagne bottle?  Not wipe off the top after he was done?  Backwash?  Or maybe he said she danced like a white girl.

Ray Lewis chipped in on ESPN, saying he thinks the incident is due to a void in leadership on the team.

Great, Ray.  Way to bring yourself into the story.  You leave the team and now there’s a leadership crisis.  I guess “leadership” is what Ray learned after his Super Bowl party guests killed a couple of guys.  That’s what you find in jail; either leadership or the Lord.

Late Update: Sweet Pea tweeted that she’s not a stripper; she’s a waitress.  They were all waitresses on that bus.  My take: Sweet Pea’s mom just found out what she does for a living.

Even Later Update: Manny is going to be OK.  The MRI revealed that he tore a small ligament behind his kneecap, and not the much more crucial ACL or MCL.  In all probability, he won't need surgery and will be ready for spring training next year.  My take: All that angst and hand-wringing for nothing.  But I'm thankful for the happy ending.
Posted by bluzdude at 6:59 PM