Yesterday, 12 people were killed when yet another gunman went into a building and randomly shot a bunch of innocent people.

We Americans have already expressed the opinion that we don’t care.  I mean; we've been expressing it for the last 20 years, and even more loudly in the last several.  Sure, a few people try to do something to change the gun-lust nature of our culture, but they are quickly and loudly beaten back into the margins.

You’d think they’d have some of their own guns, in a place called the Navy Yard.  No wait… they did!  In fact, the gunman shot a guy who had a gun, and took it from him.  If only that guy had more guns, maybe he could have defended himself better.

This shooter was a black guy, so at least people of color are breaking through that barrier.  To find the last African-American mass-murderer, you have to go back to the DC Sniper killings of the early 2000s.  So mass killing is no longer the providence of disgruntled white kids or squinty-eyed militants.  Who knew that guns would be a catalyst for equal opportunity? 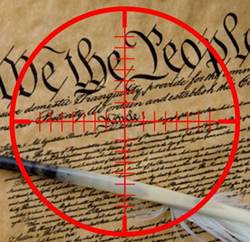 that cool, metallic piece of power you cannot live without.'

Actually Cleavland had a Mass murdering Blackman he just didn't use a gun and prayed on prostitutes .

Daaaaang, son. But yes. All of this. Especially this:

"If only that guy had more guns, maybe he could have defended himself better."

You walk around New York City… you probably ought to carry 4 or 5 guns, just to be sure you’re safe.

Unless he had them all in one room, that’s a serial killer, and a completely different brand of whack job.

Of course, by that standard, the DC Snipers were serial killers too. So it looks like African Americans still have a ways to go, to become accomplished mass murderers.

Ugh... I said this after Newtown and I'll say it again. These so-called 'Patriots' will trample over Roe v Wade to save the life of an unborn fetus -- but once you're out of the womb you're on your own. I don't have an opinion one way or the other on abortion, it's the hypocrisy of the GOP that angers me. You're right Bluz, they only see the 2nd amendment. Voting rights act? Obamacare? OWS's (1st amendment) right to a peaceful protest? Nope, nope, and nope. Hell, crazy Ted Cruz thinks he can be the POTUS despite being born in Canada.

If they really believe that "guns don't kill people, people do" then how come countries with stricter gun laws (like Australia for example) have much lower violence rates? Don't tell me there are no criminals in Australia -- the whole continent originated as a prison!

We are a culture with values that are totally out of whack, and self-contradictory all over the place. I don't know what it would possibly take to change that. I don't think it's possible.

Next week's new experience for The 52/52 Project is going to a shooting range with a group of gun enthusiasts. Talk about trying something way outside my comfort zone.

The even bigger challenge may be writing about it. My host is a close family friend who has been trying to talk me into this for years. I always said hell no, until this new project swayed my normal clear-thinking. Wish me luck...

YES. I love your angry posts. This one especially. Why is it that everyone is so CLING TO YOUR MOTHER FUCKING GUNS Y'ALL! ? I'll never get it.

(FYI, I looked back to see your responses to some old comments I've made on past blogs AND THEY'RE NOT THERE. I had a virus in my computer a few weeks ago, wondering if it was blocking me. Or are YOU blocking ME. If that's the case, I wasn't speaking to you, first.)

You should do it. Nothing wrong with a little target shooting. In fact, that’s the perfect scenario… you’re surrounded by experts in a controlled environment. I’ll look forward to hearing about it.

Hey everyone, you can find a link to Sherry’s blog on my blogroll. She’s trying an experience she’s never had before every week for a year, and writing about it.

Thanks Cassie... It's been a while since I've done the "angry post." This one came from wondering what it would take for us to shake off this irrational mania for the 2nd Amendment. I realized that if the wholesale slaughter of babies can't do it, nothing can.

And welcome back; I've missed you.

I believe you meant to say 'Murrica. Now if you'll excuse me, I'm off to get my Big Mac at Walmart along with an industrial sized bag of Cheezy Puffs and 12 gallon bottle of Coca-Cola. Because I'm a patriot, damnit!

And patriotism means agreeing with whatever ‘Mrca does, no matter how lamebrained! Cuz we’re patriots, dammit! Fuck Yeah!