Odd Bits - The 'What's Under the Bed' Edition

I just got back from an employee event at Fogo de Chao, so excuse me if none of this makes sense.  I blame it on the meat coma. 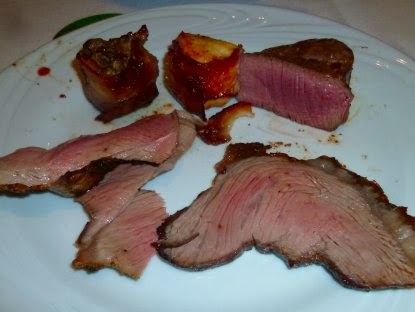 Capital Crimes
The hockey season is almost upon us, and I can’t wait, especially because the Steelers’ season is beginning so ominously.  But pre-season hockey games have started; in fact, they actually had one here in Baltimore.

The Washington Capitals played the Boston Bruins downtown at the aging Baltimore Arena, before a half-full house of 7634.

Granted, it was only pre-season, and the Arena is badly antiquated, but it goes to show the limited appeal of the Capitals.  They play a mere thirty-something miles away, but could barely draw breath here in Baltimore.

I’m pretty sure that the Penguins could play a pickup game in Youngstown, and pack the house.

Good News for Those of us with More Chins than a Chinese Phone Book
A company called Kythera Biopharmaceuticals saw their stock surge this week after reporting they have an effective cure for double chins.

They've devised a drug that when injected into the neck six times over four weeks, destroys fat cells while leaving other tissue unaffected.  I believe this will be received like the best news from the pharmaceutical industry since boner pills.

As far as I’m concerned, I’m all in.  My meat and beer-laden diet is slowly removing any semblance of a jaw line.  When I look in the mirror, all I see is this… 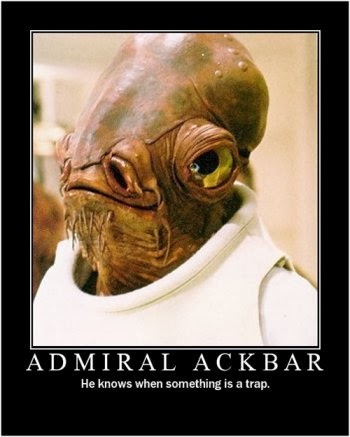 Of course, with a mug like this, the chin is the least of my worries.

Not Exactly the Kind of Crocs you want to See Under the Bed
Holy shit!!!!  I knew it!!!  All these years I've been keeping my feet inside the bed and under the covers have been validated.  There really ARE alligators under the bed.

A guy staying in a hotel in Zimbabwe woke up to find a real live crocodile hanging out under his bed.  I shit you not. 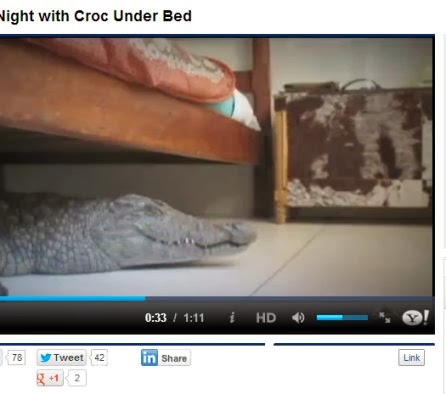 I've always said that the real sub-bed perils for children are not boogiemen, monsters or even killer clown dolls.  Alligators are totally built to fit in the small confines under a bed.

Granted, I’m highly unlikely to spend any time in the hotels of Zimbabwe, but I think I’ll be checking under my hotel beds in the future.  I mean, how hard could it be for an alligator to climb out of a sewer, sneak past the concierge, creep onto the elevator and scoot under my bed on the 18th floor at the Hilton?  I’m not taking any chance.

And here I always thought the worst thing I’d step on in the morning would be a used Kleenex.
Posted by bluzdude at 7:49 PM

Don't look under the bed! OMG...scary!

I saw a comment from Caps owner Ted Leonsis a while back about why they don't advertise in Baltimore (no ROI) Is it a demographic issue? I mean it's not like baseball or football where each city has its own team.

Hope you're coming out of that meat coma, Admiral.

I know, right? There's no competition. Baltimore should be a legitimate market for the Caps, but people here just don't care, even when the Caps are winning.

After the Fogo event, we were dismissed for the day. A I got to go home and take a nap. It was glorious.

I'll be there on MONDAY! HOCKEY HOCKEY HOCKEY! Finally, for once, as a weird Penguins lover and Pirate LOOOOOOOVEER! It's finally my time to shine. Suck it Steelers.

The Steelers certainly are sucking it. So strange that we now look to the Pirates for comfort. It's like Bizarro World.

You scared me there for a minute. I read the title "What's Under the Bed" then the first thing I saw was a plate of meat. I was curious as to what kind of parties you were throwing over there at casa de bluz.

I am gonna watch that pharmaceutical breakthrough closely. For while my boners are just fine, thank you, my chin could definitely use a little work.

I'm actually on my way to a meat feast and still find myself jealous of your meat feast. Hope I get a hunk of alligator at mine.

The only meat under the bed was alligator meat… plus any leftovers the alligator left after biting off someone’s foot, who let it wander out from under the covers.

Like I always say, the best Meat Feast is the one in front of you.