As I mentioned last week, I recently had to buy a new washing machine.  I went to Best Buy, looked at a few models and had a done deal in about 10 minutes.

At least 5 of those minutes consisted of the sales guy trying to get me to buy fancy, metal, replacement water hoses.  I resisted, because there was nothing wrong with the hoses I already had.  I asked him if the fittings were universal, or if these new hoses had something that was unique to the model.

They didn’t.  They were just new, accordingly stronger and less likely to burst.  Even on the forms, there was a box to initial about these “required” hoses.  Again, I asked if new hoses were actually “required,” or just “recommended.”  He confirmed that they were recommended.

Because I’ve been hemorrhaging money since November, I passed.

Anyway, I had the new washer delivered last Saturday.  I prepared my old one for removal… unplugging it, turning off the water and disconnecting the water hoses.

When they brought the new one, the first thing the delivery guy said was, “There aren’t any hoses with this unit.”

He said, “The sales guys are supposed to make sure you buy the hoses.”

I said, “He tried, but I said no.  The hoses I have aren’t that old, and they work just fine.”

I haven’t seen this kind of pressure put on me since the high school yearbook committee girls tried to get me to stop signing the class signature page, backwards.  (I used to be able to do that.  Now, I can’t write in cursive forwards OR backwards.)  They must have some kind of Water Hose Incentive Program.  (Slogan: “WHIP Those Washers!”)

Anyway, the delivery guy said that he’s not allowed to work with any equipment that didn’t come from the store, so he wouldn’t be able to “install” my washing machine.”

I said, “I think I can handle plugging it in and going like this…” [Makes twiddling motions with fingers.]

He asked if I had any pliers (to tighten the hose coupling).  I do.  In fact I have many tools, most of which I know how to use.

So I signed off on the delivery and he left.

I plugged in the washer, and screwed on the hose couplings.  Now, the washer wasn’t pushed all the way back to the wall, so I had to lean over pretty far to reach the water spigot.  And when I opened up the cold water valve, small geyser erupted and hit me square in the face and chest. 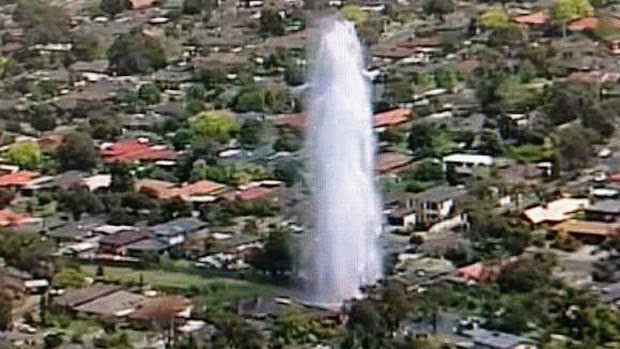 OK, it wasn’t quite that bad.  It was more like this: 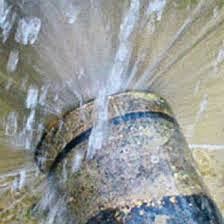 But it felt more like the first picture.  My first thought was that I was so glad the delivery guy was gone.  He’d have been laughing his ass off at me.  If I hadn’t known better, I’d swear he sabotaged that hose.

My second thought was that now I was going to have to go back to Best Buy and humble myself by getting one of their hoses after all.  I know I could have gone to a Lowe’s or Home Depot, but I figured I should at least get Rewards Points for it.

First, though, I figured I’d better see for sure where the leak was coming from.  Maybe I hadn’t fastened it on tight enough.  So I kept cranking on the water in quick bursts, to try to get a look at the source of the leak.   This was hard, because the water was spraying directly up, in the direction from which I was looking.  (I didn’t have many other options, without crawling between the washer and the wall.)

I had it fastened properly.  The leak was coming from between the coupling (that screws onto the washer nozzle) and the end of the hose that inserts into the coupling.  The hot water hose didn’t leak at all.

Now, I was pissed.  The damned thing worked just fine the last time I did the wash.  Sure, the hose was 17 years old, just like the washer was, but it still looked to be in good shape.

Then I remembered that when I first moved in, the apartment complex supplied a set of hoses that I never used.  (They usually provide the washer/dryer, but I already had my own, and I don’t like those stackable combo units, so I declined it.)

I looked up in the cabinet where I used to keep the spare hoses, and of course, they were gone; no doubt thrown out by the last girlfriend, to make room for her crap.

I sat down to read through the manual.  Maybe there was a setting that I had to use, to give the water somewhere to go.  (I know, I was grasping at straws.)  But no.  The manual just said to attach the hoses and turn on the water.  Shit.

Then I thought, “Hey, there’s one other place where she might have stashed the replacement hoses…”  I checked the cabinet under the sink, and voila!  There they were: a set of 16-year old washer hoses, in pristine condition!

I hooked up the hose and it worked like a charm.  And I didn’t have to go crawling back to the store!  Victory is mine! 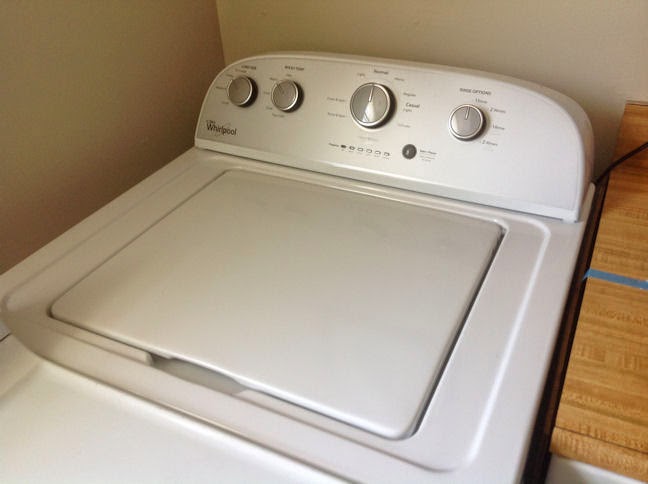 Made me so excited, I couldn’t wait to get stuff dirty!
Posted by bluzdude at 6:07 PM

Email ThisBlogThis!Share to TwitterShare to FacebookShare to Pinterest
Labels: Bluz LIfe, Stories and Misadventures, Things That Piss Me Off

Happy laundry. Quite a saga. Remember swinging through the diapers on the line in the basement when you were a tot.
You've come a long way, Bluzbaby.

Yay! You sound like me. I would spend way more time trying to figure out how to make the existing stuff work before I'd EVER go grovel at a store. EVER. Well done, friend.

Any time I can sound like you has to be a vast improvement over sounding like me.

Man, I'm so happy this story had a happy ending. I would have hated it if you had to return to the store to buy their damn hoses.

P.S. The delivery man was was a prick.

I am the loser who is fundamentally incapable of installing/assembling/repairing stuff myself. I have tried, Lord knows I have tried, but EVERY SINGLE TIME, it ends in a big, expensive disaster. I'm not sure if it's bad luck or coincidence or what, but kudos to you for not paying for new hoses and/or professional installation.

I've been lucky so far... the few snafus I've had have been relatively minor. I know when to call in the professionals.

It's bad enough how they hound you about buying the service packages. We're onto that scam, so now it's the hoses...

Ha, take THAT, delivery guy! This would be me. I'd rather do it myself, especially after being told I couldn't. Oh, we HAVE to use your new hoses? That sounds like a challenge. Hold my beer, I need to grab some duct tape...