As my Summer of Bluz weekends go, this last one was pretty full… ballgame and a movie.

Saturday, I went to see the Orioles, on Manny Machado bobblehead day.  This was my last Pirates/Orioles rainout ticket exchange, which I picked up a couple of weekends ago.  What I didn’t know was that the game was directly opposite the Belmont Stakes, in which California Chrome was going for the Triple Crown.

I was only mildly disappointed… after all, it’s just a 2-minute race, versus a whole day of sunshine, beer and baseball.  Plus, I was sure I’d be able to find it on a TV screen, somewhere.

Normally, I’d have seen it from my usual haunt, The Bullpen.  Post time was scheduled to be at 6:50 and the O’s game didn’t start until 7:15.  The problem was that it was a bobblehead night, and the place would be packed.  Only the first 20,000 would get the coveted bobblehead, so I expected the lines to be long.

As Sitcom Kelly and I once told the owners of the place, “Cheap Ass Beer is more important than another free t-shirt.”  (Because their slogan is “Cheap Ass Beer,” we thought they should have put our suggestion on a t-shirt.)

However, it’s not more important than a bobblehead.  I wanted one.

Last year, when I went on Adam Jones game jersey day, there was a line halfway around the ballpark, 3 hours before game time.  (They usually let you in 2 hours prior.)  So I was expecting close to the same on Saturday.  I figured, I’d get down to The Bullpen about 3:00, do some power drinking and watch the line from my spot at the end of the bar.  As soon as I saw the line begin to get serious, I’d head over.

So there I was, two-fisting it at the bar, when in walked… well, someone…  It was hard to tell, because she was seriously backlit by the light coming in the front door, but she piqued my curiosity when she sat down at the end of the bar, two stools from me.

All I could tell was that she had long, straight hair, and was pretty nicely put together.  She looked to be about my age, or at least within shouting distance.

The fact that she was by herself was in itself, a rarity.  I admit I look for women to talk to when I’m out and about, because you never know.  But I’m the first to admit that a ballgame does not provide a “target-rich environment.”  (A Little League game, maybe, but not a pro game.)  I’ve found that women generally go to baseball games under two circumstances, either with a guy, or with a pack of girlfriends.  Neither scenario is conducive to chatting them up.  I don’t think I’ve ever seen a woman out to an Orioles game, by herself.

She ordered a Bud and while she was paying the bartender, I had the chance to scope her ring finger.  It looked to be occupied by a couple of rings, but I wasn’t sure.  There was a stone, but it didn’t look like a diamond.  Still, I figured she was waiting for someone, so that would be that.

I had been talking to the couple on my left, when during a lull, she began talking to me.  She said that a male friend of hers gave her money to come down to the game, buy a cheap ticket, and pick up a bobblehead for him.  The problem was that he sent her down the night before, for the wrong game.  D’oh!  So she was back again today, and a little edged by it.

So she WAS here by herself, after all.  It seemed odd to me that if she was married, she’d be running down to the ballpark for some dude, by herself.

She wondered about where her seats would be, so I asked to see her ticket.  I have a pretty good grasp on what’s where.  (I won’t be getting flimflammed by any more ticket hustlers, that’s for sure.)  When she spun toward me to discuss her seating arrangement, that’s when I saw it.

Granted, the lighting was still very bad, and I still couldn’t see her with any clarity, but there was no missing what she was missing.  And by that, I mean at least 2 or 3 of her bottom front teeth.  Girlfriend could eat a hot dog without unclenching her jaw.

Remember a season or two ago on Survivor, when that woman had to take out her bridge at Tribal Council?  It was like that. 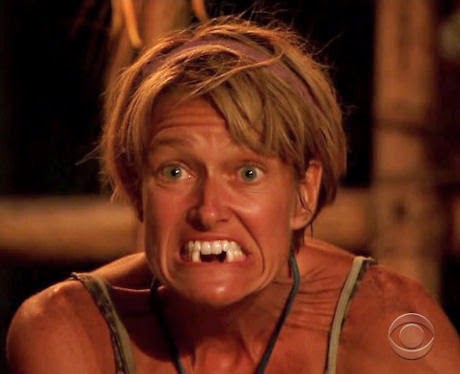 Can I pick’em or what?

I considered buying her another Bud, just for shits and giggles, because she obviously wasn’t rolling in dough.  I mean, dentistry aside, she’s running bobblehead errands for some dude.  She probably had an interesting story.  But before I could do anything, she finished her Bud, headed out the door and took off for The Yard.

I had anticipated joining the line around 4:00, but to my surprise, there still wasn’t one.  I got in at least another half hour of Cheap Ass Beer before I finally saw the line start to form.  Ended up talking to a father and son in line, which turned out to not be very long.  They opened up about 4:45.  Good thing too, because I really had to pee.

Oh, and I got my bobblehead. 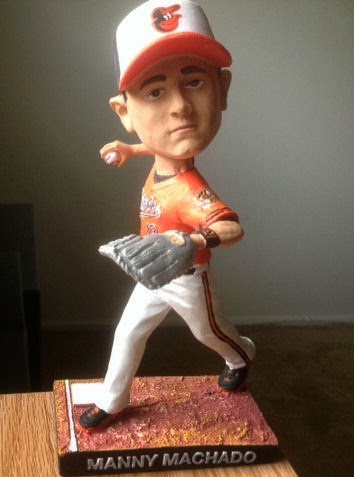 While it's not a great likeness, I like how they paid homage to the Platinum Glove Award he won last year.

Because there was still about 2 hours before game time, I dashed up to the new(ish) bar they put on top of the center field batter’s eye wall. 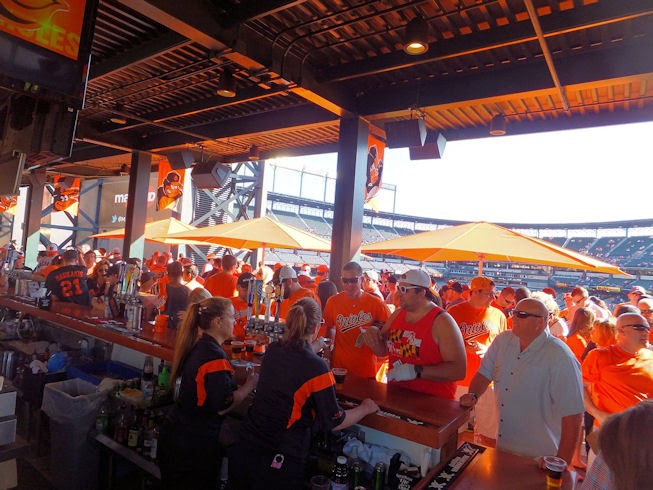 I camped out at the bar there and talked to another couple, one of whom was a fan of the O’s opponent, the A’s.  Soon, there was another girl sitting on the other side of the couple, talking to them.  I wasn’t sure if she was with them or not, but good gravy, this girl was gorgeous.  (And about 20 years younger than me, I’d guess.)

Obviously, I waited a moment or two, before passing judgment.   She indeed had a full set of teeth, in addition to full sets of everything else.  The four of us talked together for a while, before the inevitable… the guy she was waiting for showed up.

It was a fun preamble to the game, but I was starting to get wobbly.  I probably had about 8 beers by then, so I figured I’d best just ride it out for the rest of the night.  After I went up to my usual club level section, I stopped for one more draft, and was able to watch the Belmont on the monitor there.

Yep, no Triple Crown winner this year either.  And I agree with Chrome’s owner… they need to do something so that fresh horses aren’t competing with those that have just run two long races.  If it were up to me, I wouldn’t have any horse in the Belmont that hadn’t run both the Derby and the Preakness.  One day, after I’m King… 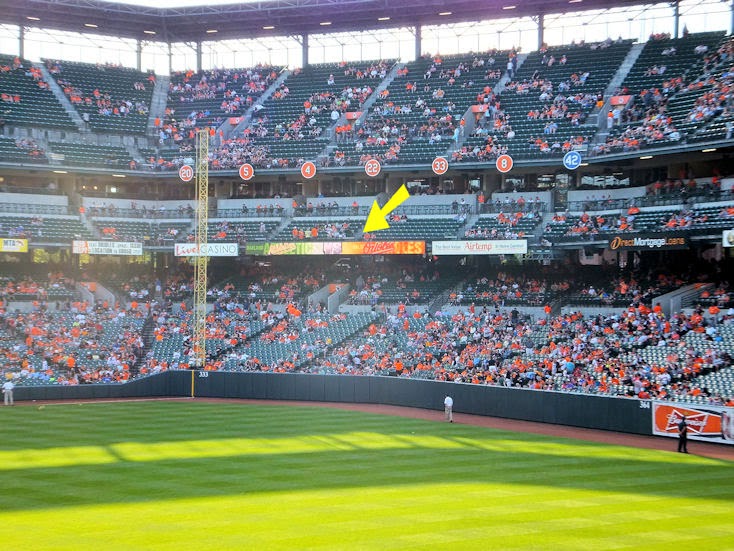 As for Sunday, I went to see Edge of Tomorrow.  What the reviews said are pretty much true… it’s like “Starship Troopers,” “War of the Worlds,” and “Aliens,” crossed with “Groundhog Day.”  I liked it a great deal, even though it is a Tom Cruise movie.

In this case, his oily, smarmy quality plays well for the opening third of the movie, to show how far he develops by the end.  And Emily Blunt is excellent as his badass counterpart.  If you like big spectacle sci-fi monster movies, you’ll like this one.
Posted by bluzdude at 6:51 PM