A Week in the Sticks, Part 1

First, I have to apologize for the line in the My Apologies post where I said I’d have the next post up by the end of the weekend.  I had all day Sunday, but just didn’t feel like it.  It was probably due to the hour and a half I spent downloading and editing the mountain of pictures I shot.  Granted, almost all the pictures consisted of food, storm clouds or kids playing ball, but I still needed to process them.

This was my annual pilgrimage back to the small northeast Ohio town in which I grew up.  I’ve been going back every summer since 1998, to see my best friends, the VP of Hell No and the Chairman of Fuck Off (aka the CFO).

This time around, my trip was almost derailed before I even left.  Thursday night, when I was eating my dinner, (a chicken tender), I managed to break off a piece of a tooth.  At first, I thought there was something in the chicken, because I didn’t feel anything break.  I spit out the mystery chunk and saw that it was unmistakably dental.

I checked my lowers in the mirror right away but didn’t find anything missing, which I found to be quite un-nerving.  If it wasn’t MINE… bleah!

Then when I went back to eating, I noticed a sharp edge on a lower molar.  With further investigation, I found that a piece was broken off to the inside of a filling.  It didn’t hurt though, so I didn’t figure it would be too serious. 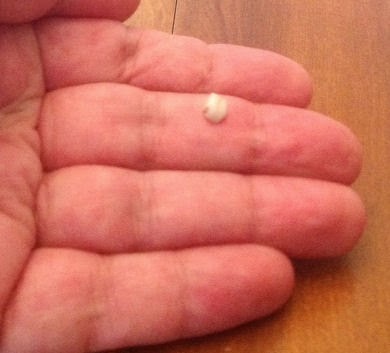 I guess I didn’t give up the Diet Coke soon enough.

I called the VP and asked him to contact my old family dentist, with whom this story took place.  (It’s his dentist too.)  I wanted him to arrange an appointment so I could have a professional make sure there was nothing seriously wrong and to just get me through the week.  I could have my current dentist make any permanent repairs when I came home.

As I waited at the airport gate Friday morning, he gave me the options of getting to see him that evening at 5:15, or Monday at 10:30.  Because I’d be getting into town about 1:00, and we usually went directly to the local tavern, I opted for the Monday appointment.  I didn’t want to show up with food in my teeth and reeking of beer and bar.

The only problem, as I discovered over the course of the weekend, was that sharp edge was cutting the hell out of the bottom of my tongue.  It would scrape every time I ate, drank or spoke, which happened to be the three things I went there to do.

Have you ever bitten your tongue really hard at night?  You know how sore it feels in the morning?  That’s how I felt all weekend.  I had to start issuing disclaimers that I wasn’t necessarily drunk, I just couldn’t speak properly.

It was kind of a blast to see my old dentist though.  His place was exactly the same as I remembered it… same magazines too, I think.  He remembered me, my family, and even where I lived.  It was nice to catch up.  I even told him that story I linked up above, about how I used to try to huff his nitrous oxide.  (I didn’t ask for it this time.)

Anyway, he concluded that I just needed a new crown, and it could wait until I returned home.  More importantly, he sanded down the sharp edge that had been cutting me, and by the next day, I was ready to resume some heavy-duty tongue action.

So here’s how the week played out:

Friday
As is my custom, I flew into Detroit, where the VP picked me up.  It was cool when, as we were coming in for a landing, AC/DC’s “For Those About to Rock” came on my MP3 player.  We were just touching down as the song came to the part where the cannons start going off and all hell is breaking loose.  It felt like I was landing in some bombed out war zone, which of course, I was.  Because, you know… Detroit.

After the aforementioned Opening Day Lunch at Shawn’s Irish Tavern, we retreated to the VP’s garage, to drink beer, play loud music, and entertain the neighbors with embarrassing stories about each other.  The CFO’s daughter, (and muse for some of my best posts), hung with us too, and even stayed the night after her daddy left.

My favorite bit from the night was the VP’s neighbor talking about how young kids should have a roster of Aunts on stand-by, at all times… an “Aunt Farm,” if you will.

Saturday
Recovery day.  The VP spent the afternoon grilling a pork roast, and holy hell, was it ever good. 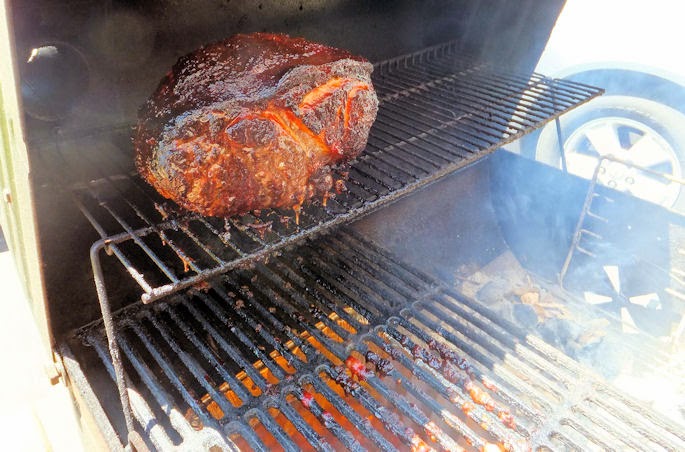 We put a real hurtin’ on that bad boy, and the VP cut up the remainders for pulled pork sandwiches for the next two days.  Took a late trip to Shawn’s, Saturday night.  (No, it wasn’t any more exciting than it was on Friday afternoon.)

Sunday
I spent most of the day with the CFO, at his place.  He grilled some burgers, the kind you get with the cheese already inside them.  You know… for people that are too busy to add that additional slice on top. 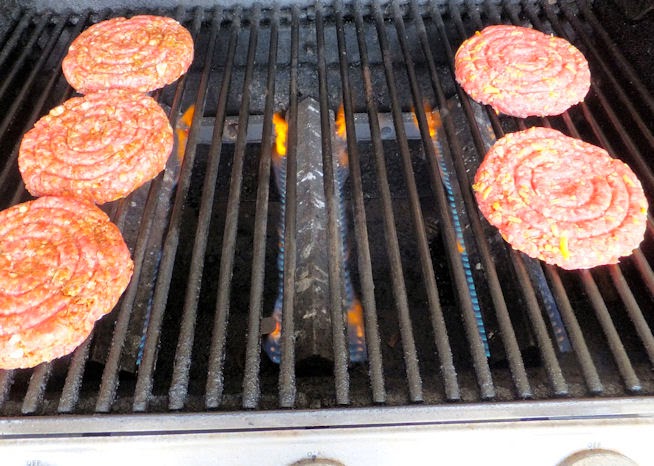 We added cheese anyway, because that’s the kind of guys we are.  (Cheesy.)

That was just lunch.  Later on, he whipped up some amazing pasta and sauce.

His oldest daughter came by for about 20 minutes, with her two kids, her new man, and his kid.  (All were between 2 and 4 years old… not including the new man.)  So it went from “quiet afternoon” to “circus” real quick.

Monday
After my visit to the dentist, the CFO and I headed about 40 minutes out of town to see his son play in a freshman basketball camp tournament.  It was pretty amazing; these kids played five 34-minute games that day and three more the next.  No idea how they did it.  I guess it’s been a long time since I’ve had that kind of energy. 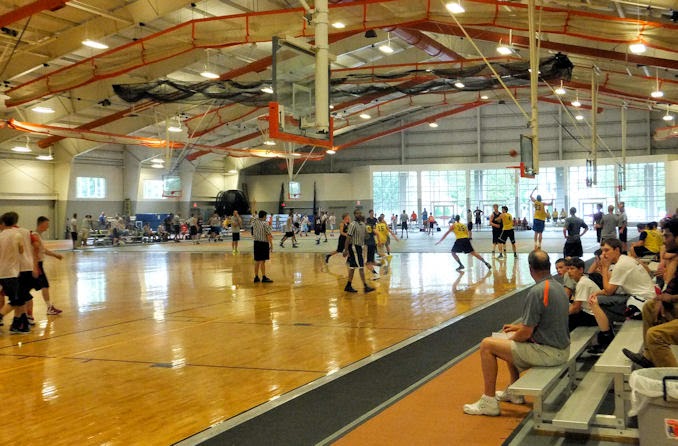 After we got back from the tournament, we headed straight out to a “legendary Toledo Mudhens” baseball game. 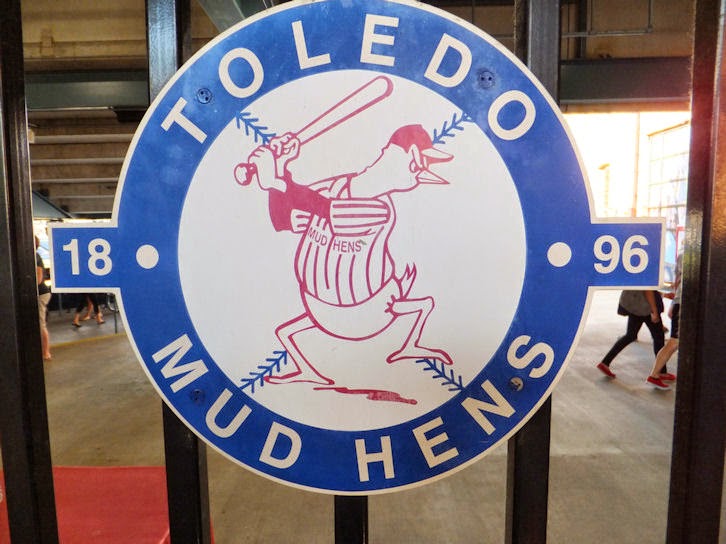 We always try to get out to a Hens game once during my stay.  At $10 per ticket, it’s a good deal, to see guys playing who are one step away from the majors.  And it’s a nice park, too. 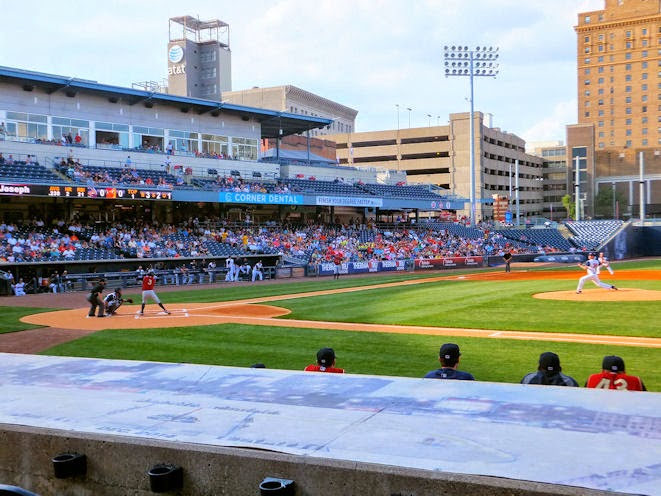 We had seats four rows behind the dugout.

The “female” Mudhen mascot, “Mudonna” spent some time over on our side. 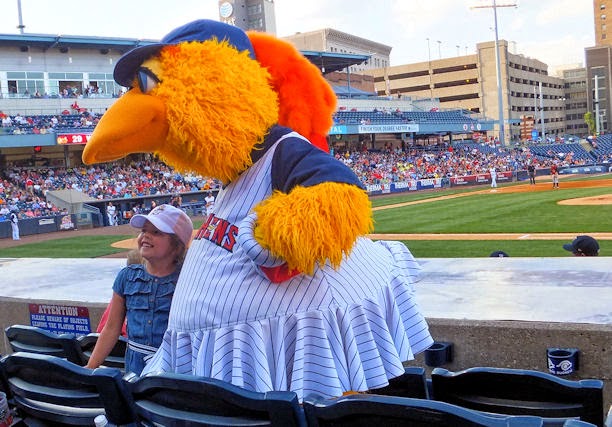 “Hey kid, does this costume make my butt look big?”

I wanted to go to this particular game because after Monday, there was rain in the forecast every day.  And over the previous weekend, both games were fireworks games.  The problem with going on fireworks night is that the bus we take to the game won’t leave until the fireworks are over, making it a much later night for us and cutting into our drinking time when we return.

During the game, the VP leaned in and said, “Did you ever notice how this announcer sounds like he’s DJing at a strip club?”

It made perfect sense to me.  I could just hear it…

“Ladies and gentlemen, warming up in the bullpen, right-hander Steeeeve, ROG-errrrrrs.  And nowwww, on our main stage, put your hands together for the lovely DES-tineeeee!”

This time around, the Hens lost 4-2 to the Wilkes-Barre Scranton RailRiders.  We were able to get back home (meaning “to the Tavern”) by 10:30.

Tuesday
Went to see the CFO’s boy play freshman baseball that afternoon (after he played 3 more basketball games), and followed that up by watching his daughter (from Friday night) play co-ed softball.  Thankfully, that game only lasted an hour, so we got plenty of time back at Shawn’s.

We had so much time, in fact, I texted my blog friend Sherry to come meet us.  She was just returning from her latest adventure in testing one’s boundaries, so the timing was perfect.  This time, she was spending time in various bars, forcing herself to talk to guys there and trying to get a phone number.  (Kind of like “Speed Dating for Barflies.”)  At least when she got to Shawn’s, she was “off the clock,” and could just enjoy some low-stress gabbing.

I had been looking forward to the $1.00 taco night special, but was so wrapped up in talking to Sherry, I didn’t try to order until she left.  (I also didn’t want to talk with taco filling in my teeth.)  Problem was; I missed the 10:00 cut off by ten minutes.  Gah!

Don’t you hate it when your stomach is all set for one thing, and then you have to eat something else?  Me too.  So I made do with their fried haddock nuggets.  Which were wonderful.  I lived.

Email ThisBlogThis!Share to TwitterShare to FacebookShare to Pinterest
Labels: Bluz LIfe, Picture This, The Glory of Meat