I went to happy hour with Sitcom Kelly tonight, which reminded me of a past email conversation.  You remember my friend Sitcom Kelly, right?  So named because we’ve been working ideas on a TV sitcom based on her life, for the last 7-8 years?  She of the basement pits full of hockey players, including one in a glass case?  And basically being one can of Fancy Feast away from full-on Crazy Cat Lady status?

Last week, I saw something online that made me think of her…

Bluzdude: Obviously you’ve heard about the “Hero Cat?”  (The cat who saved a little boy by driving off an attacking dog, and was caught on surveillance video while doing it.)  Now she’s throwing out the first pitch at a minor league baseball game.

That just made me think that we should add a Hero Cat episode to TOK.  (“That’s Our Kelly,” the name of our never-to-be-made sitcom.)  Probably something elaborate, involving all three cats.  (Which we can describe, without showing.)  Like stopping SK from being carjacked, then getting into the car and backing it into the driveway.  Or going out for treats.

Sitcom Kelly: I see the three cats carrying SK out of a burning building. (See attached.) 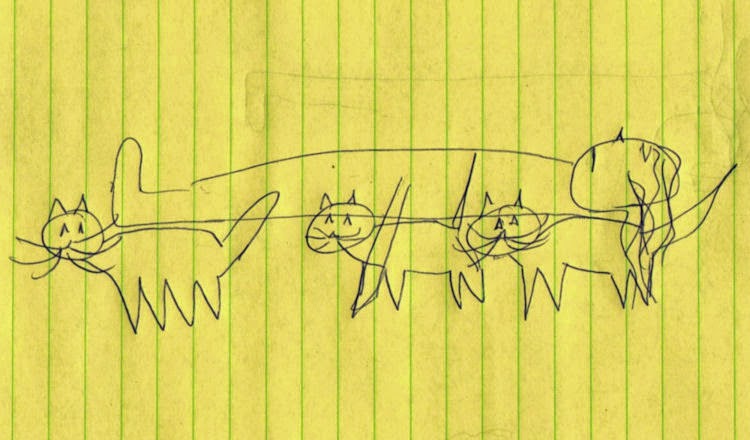 The only things missing are “X’s” over her eyes.

BD: It would be better if they rolled her up in a carpet first.

SK: And then they put her in the trunk and we drive off to safety, but first they stop at the store for treats.

BD: We’d have to have SK describe it in retrospect.  Maybe later we find out that Kris and Matt (her two original Stockholm Syndrome pit captives) actually did most of the work.

Jump forward to a thread from this week…

BD: Watch out… now you have The Pope on your butt: Pope Warns Married People Against Having Pets Over Children.

SK: Hmmm.  My cats will take care of me in my old age.

BD: I’m sure they will, one way or another.

SK: They’ll do whatever needs to be done.

BD: Like a black ops team… I’m picturing them with tiny earpiece mics.

SK: There will be no evidence of my existence once they’re done.

BD: Exactly.  Other than wine bottles… and a couple of 8-track tapes.

SK: And a vintage 1986 prom gown balled up on the living room floor.  With a fresh corsage next to it.

BD: And a large, heavily fingerprinted glass case in the living room.
Posted by bluzdude at 8:41 PM