A Week in the Sticks Part 2

Continuing on with my vacation adventures, I have to mention that throughout all these “adventures,” there was considerable time for watching daytime TV.  One of the staples was “Tru TV,” (formerly “Court TV”), which featured lots of shows like “The Worlds Dumbest Hillbillies Part 4,” The World’s Dumbest Partiers Part 17,” and “The World’s Most Shocking Videos Part 785.”

Talk about a profitable production… all they have to do is mine YouTube for people breaking things and hitting each other with various implements, find some of these clowns to talk about what happened, and BANG, they have a TV series.

They probably ought to just rename their channel “Lowest Common Denominator TV,” and call it a day.  Not that it wasn’t entertaining, mind you.  But there are only so many times you can watch someone crash into something with a tractor.  Anyway, onto the rest of the week.

Wednesday
When I used to live there, we used to go to this little Mexican place called Loma Linda’s.   To say that it was unimpressive from the outside, would be a vast understatement.  It was basically a shack with some tables and a bar.  But the food was awesome. This is Loma Linda’s, as I remember it. Yes, I even remember it in black and white.

When I worked for the record store, my manager and I used to go there for lunch, for a massive burrito and extremely stiff margaritas.  Of course then he’d send ME in to tell his assistant manager that he wasn’t coming back to work.  Meanwhile, I’d seek out a hideaway in the back room for a siesta.

So after missing out on the $1 taco special on Tuesday, I was primed for Mexican, so I suggested to the guys that we hit Loma’s for lunch.  They completely remodeled back in the mid to late 80s, so now it shares very little with the earlier version, but the name and location. 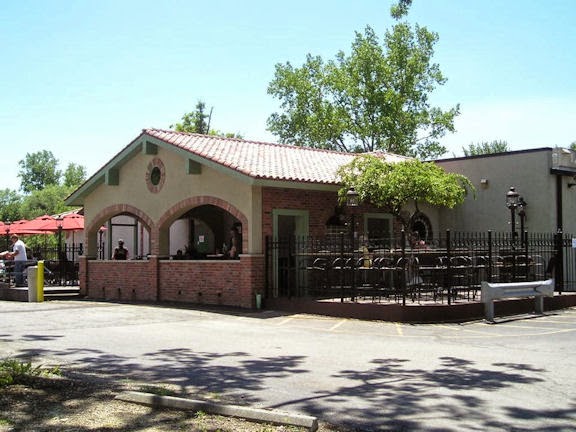 The food is still good, so I came out of there packed.  I didn’t try the margaritas though.  Had to save some stamina for later in the day.  It had already been a pretty alcohol-intensive week so far.

On the way home, we passed our old house; the one where we had The Barn.  The place looks good, even though they seem to be running some kind of business out of it. 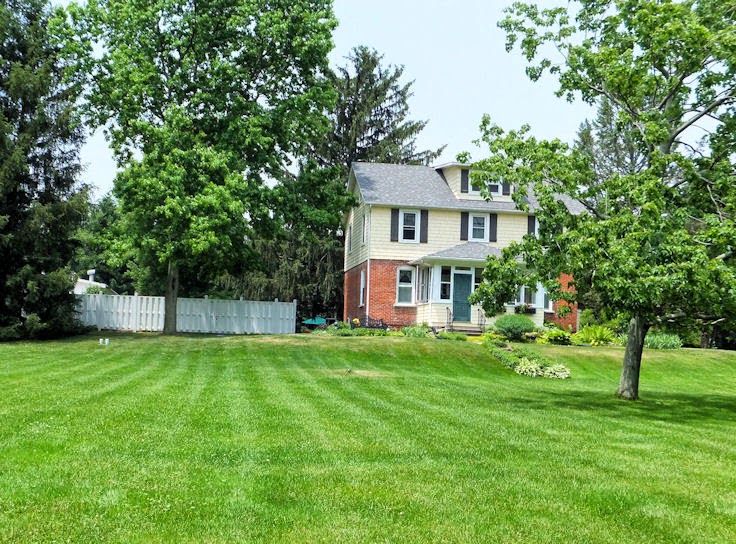 They put up a fence, I presume to keep people like me from seeing what was going on with the barn. 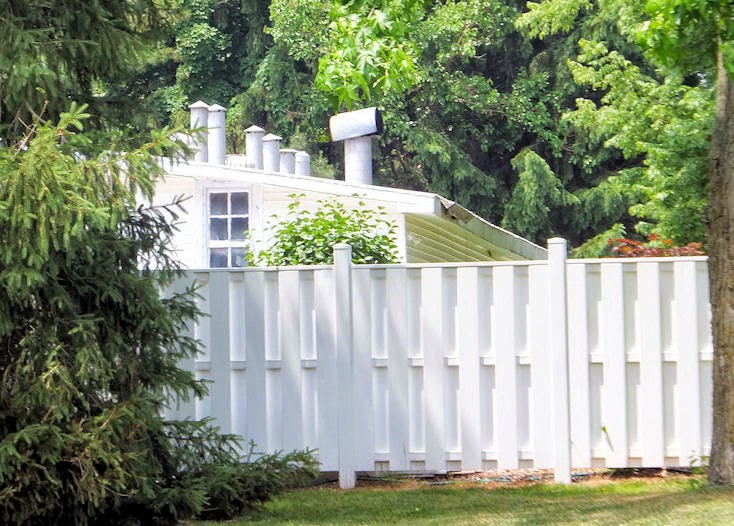 I can still see they did a lot of work on it, putting up new siding, a new roof, and new vent stacks, the latter of which is probably necessary for the meth business.

I might have liked to get out of the car and creep up closer for some better pictures, but that would have ruined our alibi for what we were doing.  If anyone challenged me on taking pictures of this house, I was going to shout out, “Google Maps!” and tell the VP to punch it.

Having been packed with meat and bean products, the VP and I retired to his place for the afternoon, to watch “house movies.”  By that, I mean Roadhouse and Animal House.  Gotta appreciate the classics.

Of course, we did take a quick trip to the Tavern during “intermission.”

We had to wait until 6:00 PM, until the CFO’s daughter got off work.  She met us at the VP’s house, then we headed down to Bowling Green, where the CFO and his son joined us.  As usual, the pizza was amazing. 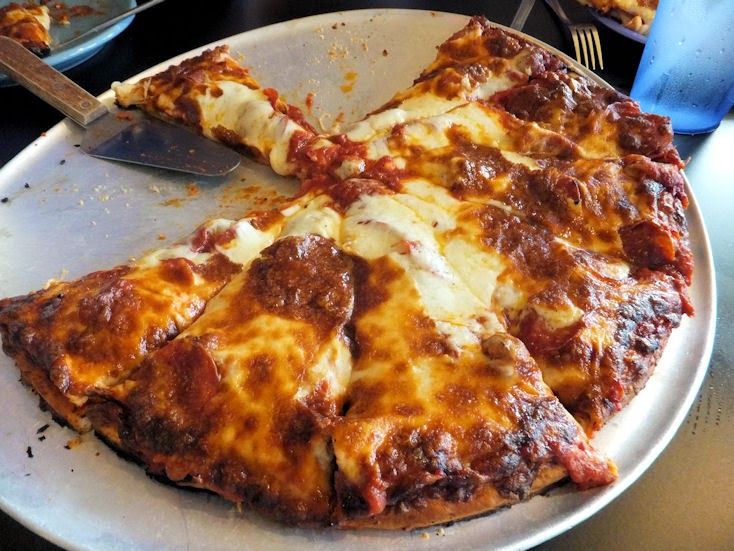 Totally worth the trip.  To Ohio. 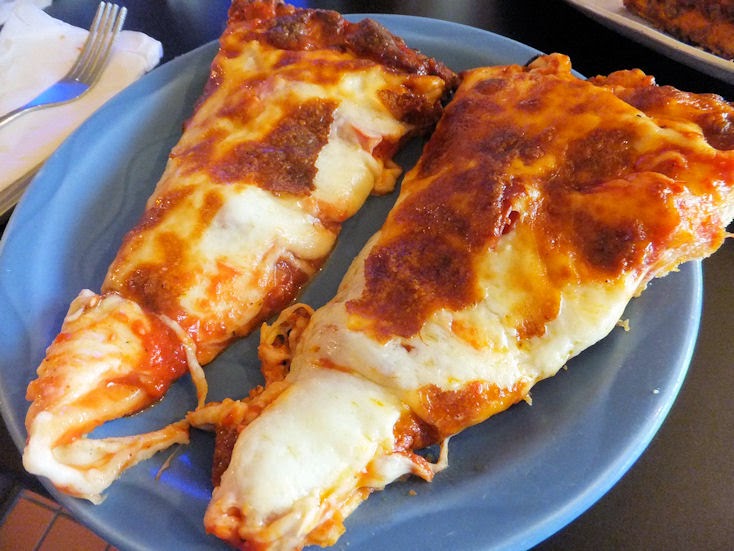 The worst part is waiting for them to cool.  The sauce is like 7000 degrees.

That kid from “Mask?”  That wasn’t a birth defect; he bit into a hot pizza and got splashed by the sauce.

After the pizza trip, there’s usually no room for beer.  Instead, the VP and I poured some Jack on ice, and watched the Bruce Willis movie “RED,” with the CFO, who hadn’t seen it.  Of course, he had to go and ruin the whole movie for us by pointing out that someone saluted improperly, because the “salutee” wasn’t wearing a hat.  Because that was totally the most unbelievable part of the movie.

Friday
The VP spent the day smoking a turkey.  And here I was sure he’d never find rolling papers large enough.

No, we weren’t actually “smoking” the turkey; he put it on the grill about 10:00 AM, with low coals and wet wood chips, and just let that baby roast all afternoon. 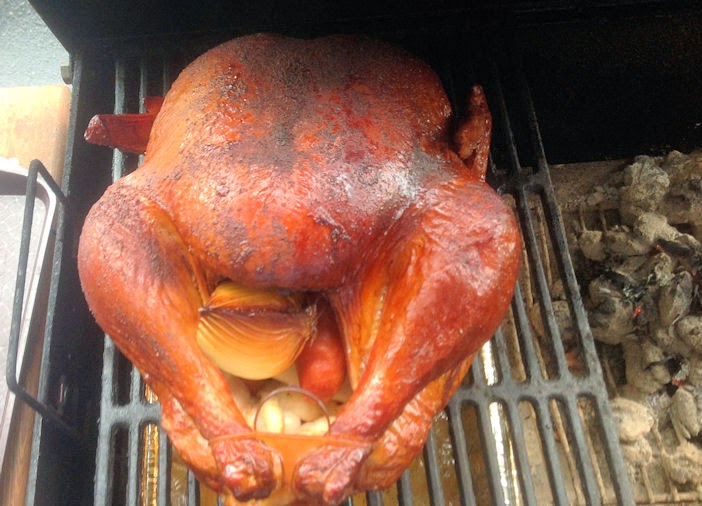 It was stuffed with onion and Tony Packo’s hot dogs.  Klinger would have been proud.

We had to pull the grill into the edge of the garage, because we had a pretty stiff rainstorm roll through.  The weather channels were going nuts, as usual, but it looked worse than it really was. 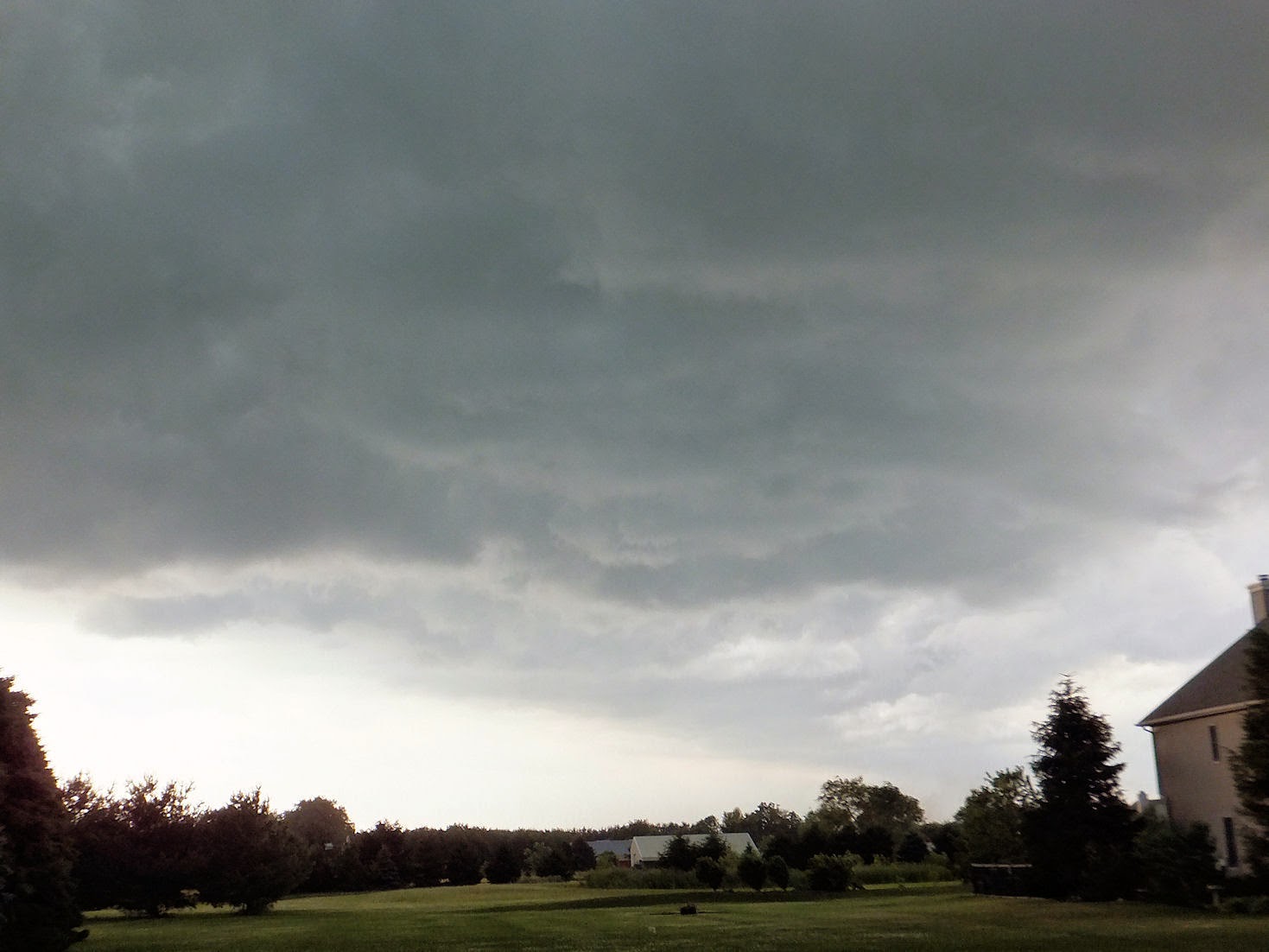 Ohio storms are very dramatic-looking.  All this for a little rainstorm…

Everything cleared off by evening, paving the way for our high school’s “All Year Reunion,” which is really just a big block party outside one of the two bars in town.  It wasn’t like they were checking class rings at the door.

This was the third one of these I’d been to, and I still haven’t met anyone I knew from high school.  Although this time, I did see a couple of my brother’s friends.  I approached one guy and made a comment about one of his (and my brother’s) high school exploits.  He just kind of looked at me and went “And I know you from…”

I saw one other guy I knew from college, who coincidentally, I mostly remembered from his luring me to cut class by seeing if I wanted to go in on a Myles Pizza.  As I always say, I can resist anything except temptation.  Pizza trumped History of Broadcasting every time.

Saturday
This was my departure day, but not until 7:40 PM.  We didn’t have to leave for Detroit until 5:00, so there was time for leftover pizza and a movie.  We watched another action classic, Geena Davis (the action hero) and Samuel L Jackson (comic relief) in “The Long Kiss Goodnight.”  I pointed out to the CFO, that this movie was totally believable, because no one saluted anyone else improperly.

The trip back was uneventful, even though I was packing 6 slices of foil-wrapped pizza.  You never know what the TSA is going to find objectionable.  They may have thought I was going to burn through the cockpit doors with scalding hot pizza sauce.

After enjoying “For Those About to Rock” while landing in Detroit, I was somewhat alarmed when my MP3 player cued up Elton John’s “Funeral for a Friend,” taxied to take off.  Sounded like a bad omen to me, but luckily, I had the correct ball cap on, to counteract the mojo. 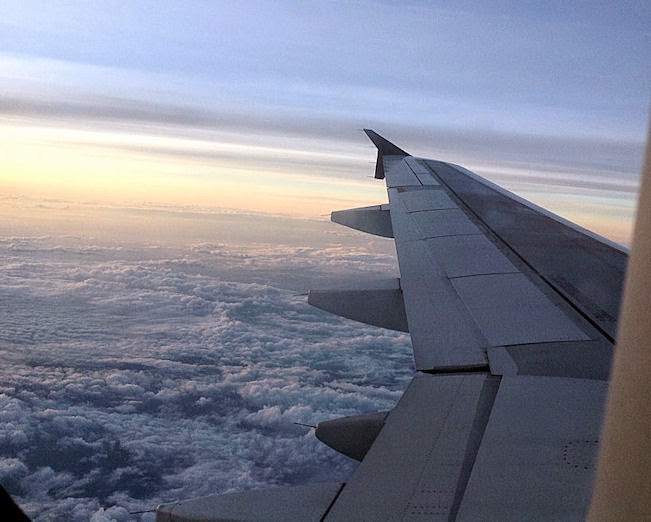 Winging my way back home.

Once again, many thanks to my buddies for the hospitality and putting up with my BS for a week.  Until we meat again…
Posted by bluzdude at 6:45 PM

Email ThisBlogThis!Share to TwitterShare to FacebookShare to Pinterest
Labels: Bluz LIfe, Bluz on Film, The Barn, The Glory of Meat