The Best Beer I Ever Had

I was talking with friends about a month or two back and the subject of the “best beer we ever had” came up.

I didn’t even have to think twice about mine.  And the funny thing is; I don’t even know what kind of beer it was.  That wasn’t as important as the circumstances.

This was back when we were living in the farmland outside Toledo, Ohio.  We didn’t have a huge parcel of land… it was an acre and a third… but it would have been an awful lot to mow by hand, so we had a lawn tractor.

Coming from the suburbs, I thought that was the coolest thing ever, especially because as the oldest son, I was about to inherit primary ownership of the family grass cutting chores.  I still had to use a regular lawnmower to “trim,” because the tractor couldn’t really get into all the nooks and crannies around our several out-buildings (a garage, two sheds and our Barn).  But it was far better than doing the whole thing by hand. 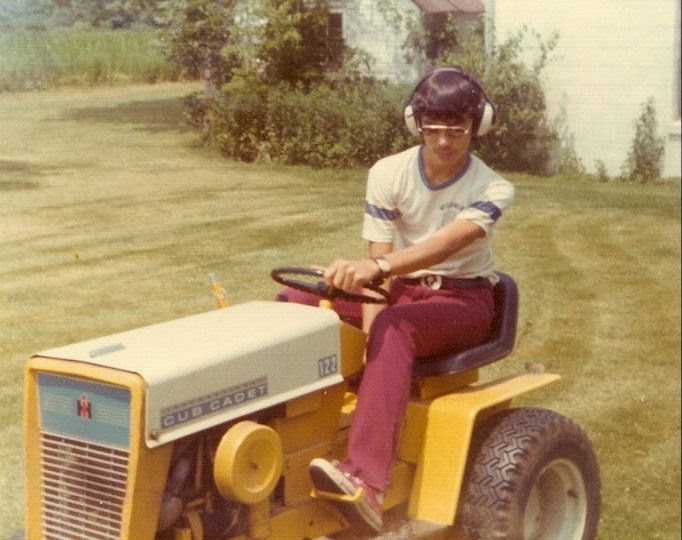 Me earning my keep, the first summer we lived in Toledo.  I was about 14, wearing a shirt from my old junior high in Columbus.  (As well as hideous pants, but that’s another story.)

It was fun at first, but the novelty quickly wore off, especially during the dog days of summer.  Cutting the grass then was a long, dusty, sweaty, allergy-provoking endeavor which was most definitely not fun.  But it was my job, so I did what I had to do.

One day, when I was around 16, I was just finishing up cutting the back yard, on a hot, muggy, dusty summer afternoon.  After I finished up one last strip over by The Barn, I came cutting back across the yard to head over to do the other side of the garage, when I saw him.

It was my dad, standing out in the yard along my intended path, with his arm outstretched.  As I drew closer, I could see he had a beer in his hand, holding it out the way the people hold out cups of water to people running a long-distance race.

Now, I’d grown up on sips of everything, from beer to whiskey, to gin and tonics, to martinis, or a small glass of wine with dinner on holidays and birthdays.  But I’d never been given a beer of my own.  Until now.

I pulled up beside Dad, accepted the beer and took a long pull on it.  It was absolutely perfect, and exactly what I needed right then.  I think I asked to confirm that I could have the whole thing.

Like I said, I don’t know what kind it was; probably something standard… a Bud or a Miller Lite.  Maybe it was a Hamms, which Dad used to bring back from his business trips to Chicago.  But it didn’t matter because it was cold, it was beer, and my dad gave it to me.  It was one of those father-son moments you don’t forget.

I continued on to finish up the side-yard, beer in hand, feeling much more mature than my 16 years.  In fact, I felt like a million bucks.  Not only did Dad trust me with a loud, powerful spinning-bladed death machine, he trusted me to drink a beer and not do anything stupid.  I know it sounds risky in retrospect, but even then, I never copped a buzz from a single beer.

But it set the stage for future such moments.  No, they weren’t always hand-delivered out in the yard, but I knew that when I came in from a long day’s lawn mowing, there would be a cold beer in store for me, and before long, maybe a gin and tonic instead.

You know, this would have made a really good beer commercial.  Too bad about that pesky “drinking age” thing.  The kids of today are missing out…
Posted by bluzdude at 6:36 PM