I’ve been wanting to do this for a while now, so why not take a shot?

You know how you scroll through Facebook and sometimes you see an otherwise smart and well-adjusted person post or share a meme that is just… wrong?  I see it all the time, and I always let them go.  I have no plans on getting into political arguments of Facebook with family and friends.

BUT… there’s no reason I can’t copy the image and discuss it here.  That way, I’m not calling out anyone in particular, just poking holes in some piece of topical tripe that seems like it makes sense, but folds under the slightest scrutiny.  And you know there’s nothing I like more than a good debunking.

Should I continue to see these weak-ass arguments, and I have no reason to think I won’t, I may make this a semi-regular feature; at least until I get bored with it, or it stops being fun.  So, here’s the one that got my attention this week. 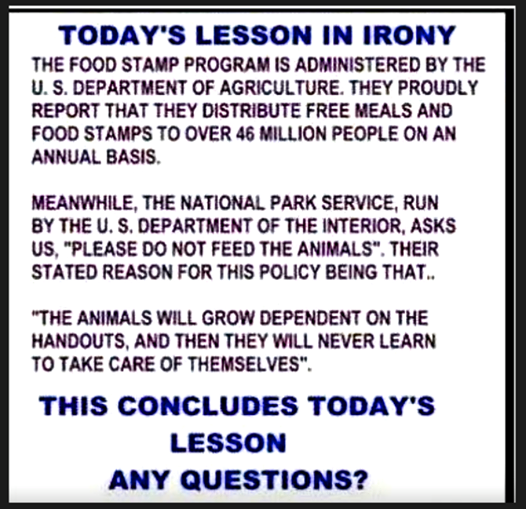 [hand up] Yes, I have a question.  Are you saying that poor and hungry people should be treated like animals?  Because that’s what I’m getting out of this.

Yes, I know this little witticism is supposed to be sarcastic, but scrape it just a little bit, and starts to fall apart.

First, there’s the obvious observation that animals may very well be conditioned to beg for food, because there are very few jobs out there for animals.

No, sorry, it’s because they’re animals, who tend not to have higher reasoning capabilities.

Humans, on the other hand, ARE capable of taking care of themselves, but from time to time, fall upon hard times, like if their plant or factory closes, or their jobs get shipped overseas, or they come back from serving their country with pieces missing!

The obvious message in this meme is that people who get free meals or food stamps are lazy, and apparently deserve to starve to death.

Is that the kind of country we wish to inhabit?  One where people are left to starve to death?  Really?

What do you suppose happens to people who are jobless, for whatever reason, and left to sink or swim or starve?  Sure, some will find and take whatever jobs they can.  Some will take classes to update their skills, and some will move in with friends and family.

But all of that takes time.  Bettering yourself for your next job isn’t going to feed your family tonight.  The SNAP (food stamp) program is essential to fill in the gaps until people can get back on their feet.

We need to stop and look at the people that are getting these “free meals and food stamps.”  All kinds of people can end up needing help… like those who are laid off from jobs in dying industries, or senior citizens who can’t live on social security alone, or mentally challenged people who are unable to work, or young mothers whose baby daddies have buggered off, or the hundreds of thousands of veterans back from Iraq, Afghanistan or Iraq (again), suffering from PTSD or other more visible injuries.

Are they all lazy?  Are none of them worthy of a hot meal?  Are we to toss them aside and maybe consider “There but for the grace of God, go I?”

As a side note, do you know what happens when desperate people are under pressure?  They don’t sign up for computer classes, they start robbing stores and houses and people on the street.  But then, I suppose that really IS the conservative answer… just put these people in jail.  Bonus: it keeps the prison industry flush with cash.

And as another side note, have you also seen the memes pointing out, amid a great tsk tsking, where people on food stamps have bought something that appears extravagant?

Seems to me people are only in favor of food aid if the food is disgusting.  Conservatives would be much more inclined to support the idea if it involved long lines of people getting thin gruel ladled into bowls.

Usually these memes focus on a single instance, usually where there is a receipt to be found, and make it into a broader point.  That’s a logical fallacy right there.  One case doesn’t make a trend.  Show me where it’s rampant, and then you might have a point.

And I only say “might” because there are other factors. What if a person had been saving and skimping and doing without, just to splurge on a nice anniversary dinner?  Or to celebrate a homecoming after a long absence?  Or coming home from the hospital?  Or getting a scholarship?  Or maybe just getting a decent piece of meat for a change.

As a culture, we tend to demonize anyone who we see as getting a benefit that we’re not getting ourselves.

Also notice the subtle anti-government conservative sniping in the meme, with the inference that the Department of Agriculture and Interior are issuing contradictory statements.

The reason that’s a subtext is because it is complete nonsense as a central point, and the only hope is to sneak it in.

See, it’s quite simple, if not necessary, for different branches of government to release contradictory messages, depending on the nature of their job.  For example:

Department of Defense: We’re going to attack them and bomb them and cut the head off the snake.

The FBI (or National Guard, or any police organization): Our focus is on decreasing the level of violence and making the streets safe.

Smarmy Tea Party meme: Oh, is our big government telling us to fight or to lay down?

That’s almost as bad as the Speaker of the House criticizing the poor as a bunch of lazy lay-abouts, then recessing Congress for 5 weeks’ vacation.
Posted by bluzdude at 8:14 PM