We Are Killer Nuts

What a busy week it’s been… I had to pass up dinner with my folks last night, just to rest up after the afternoon Orioles game.  (The game being played in a humid, low 90s sauna didn’t help.)  I hope I remembered to close the blinds before lying naked in front of the fan.  I didn’t get a call from the landlord, so I probably did.

As I alluded to last post, I had a steady stream of activities lined up for the week, consisting of a concert, a day at the State Fair track, and three Orioles game.  But the big treat was Saturday’s Ohio State/Navy football game, played right here in Baltimore.  I haven’t been to a Buckeye game since 2003 (at Wisconsin), so it was nice to get back on the Scarlet and Gray train.

My brother Ed bought a boatload of tickets, so Mom and Dad came out for the game and we all tailgated down at the stadium. 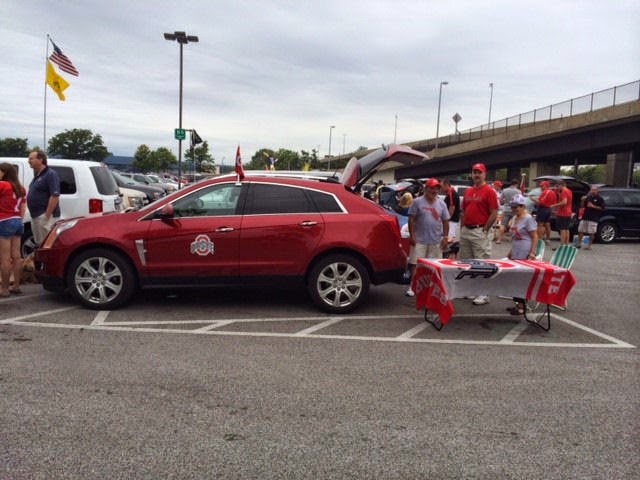 We could tell right off that the crowd would be made up predominantly of Buckeye fans.  In fact, the night before, Camden Yards was crawling with people in OSU shirts.  There were still a good number of rabid Navy fans though... they even brought their counterparts to the legendary "Cheeseheads." 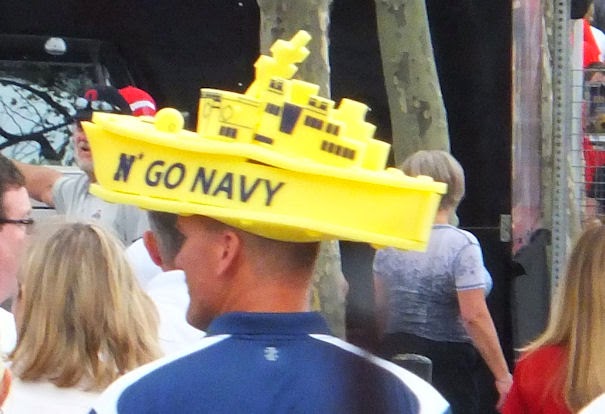 I guess these are called "Shipheads."

Because it was fairly early, we went with the “breakfast” version of the tailgate, featuring eggs, brats and breakfast sausages.  My brother combined these into a wrap, which I dubbed, “The Sausage McEdward.” 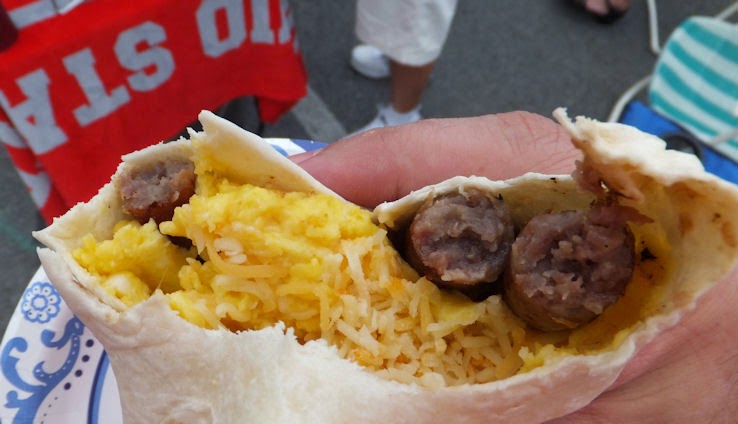 Because we had a spot right on the main aisle, we got to see the bands walk up to the entrance.  As usual, the Ohio State Band, aka “The Best Damn Band in the Land,” made a scene, chanting, “We are the Buckeyes, we are killer nuts!”

This was my first game seeing one of the military academies, so I was impressed with their spectacle as well.  For the pregame, it seemed like they brought the entire Naval Academy onto the field. 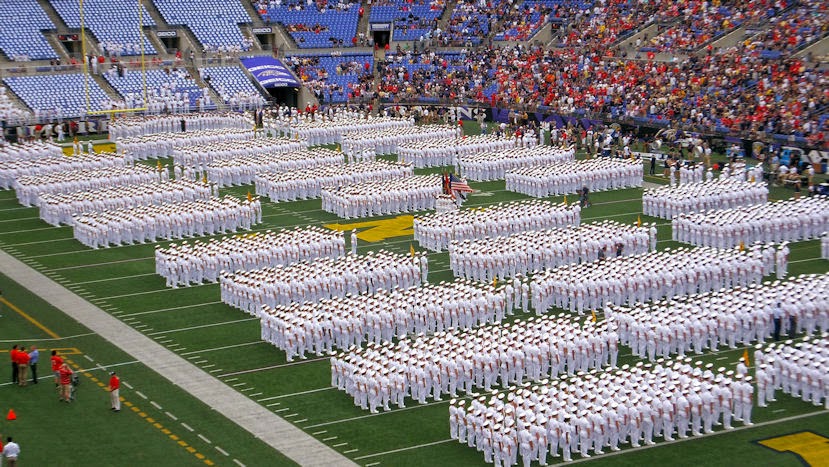 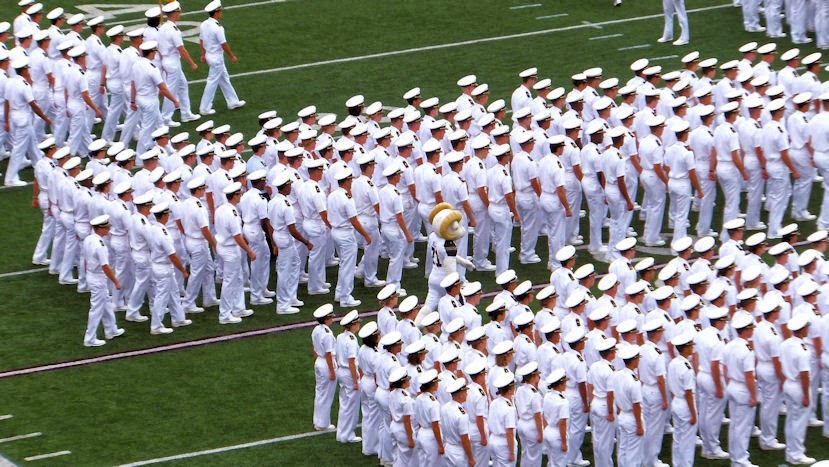 That big-headed kid in the middle must be there on Affirmative Action.

If I had to guess, the entire left side of the field was Buckeye fans, and about 40% of the right. 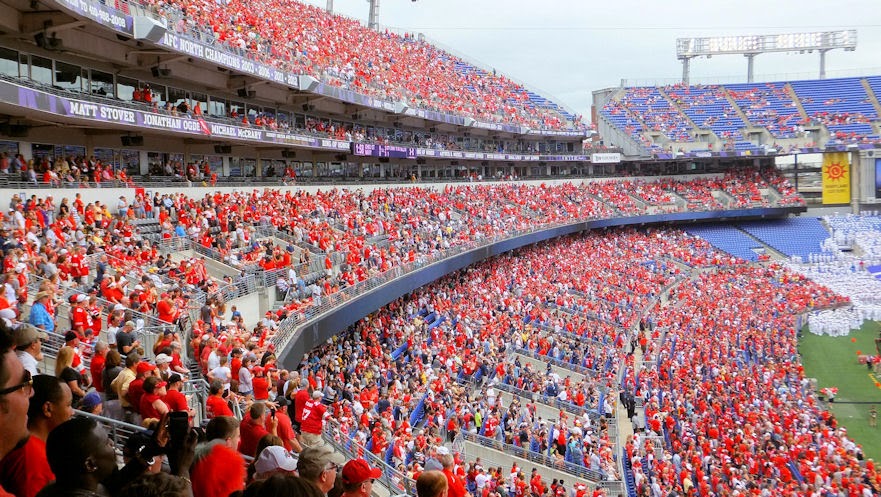 With the white unis in the end zone, and the entire left side of the stands clad in red, you could very clearly see the line of demarcation. 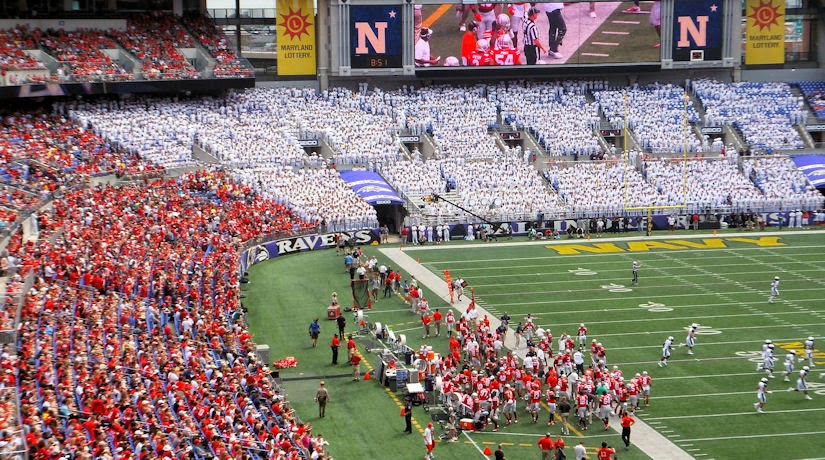 As opposed to most of the football games I attend, this one seemed to have a genuine air of respect, between the teams and among the fans.  In fact, before the game, they had a handshake line, which you usually don’t see until after the game. 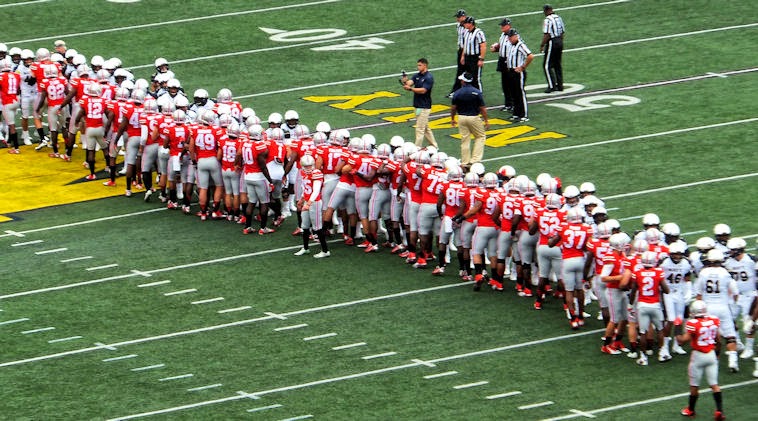 The only thing missing was a flyover.  I’ve seen them do flyovers for Ravens games right here in this same stadium; I have no idea why they wouldn’t have one for a big Navy game like this.  Budget cuts, I guess.

I did have concerns about how the game was being handled by stadium management.  See, one of the cool things about college football is the excitement generated by the bands filling in the down times with music and fight songs.

I suspect the Stadium Authority hadn’t been to many big-time college games, because they kept drowning out the bands by playing music over the PA system.  I mean, who does that?  It’s not like these were paid advertisements; they were just standard rock and pop songs.  There was no point to them, and they certainly shouldn’t be squelching the extensive efforts of the bands, one of which had come clear across the half the country to perform.

Halftime was great though, because that’s where the Ohio State band got even.

First, the Navy band played a couple of songs and marched around a bit.  I could barely hear them. 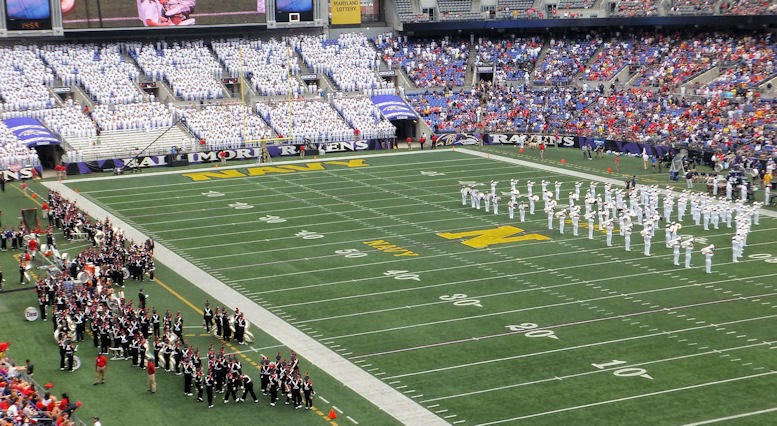 They were finishing with Anchors Aweigh.

After that, TBDBITL came on to show everyone how it’s done.  No, they didn’t do any T-Rexes, or Michael Jackson moonwalks this time, but they did a nice anchor while doing Anchors Aweigh (again) as a tribute. 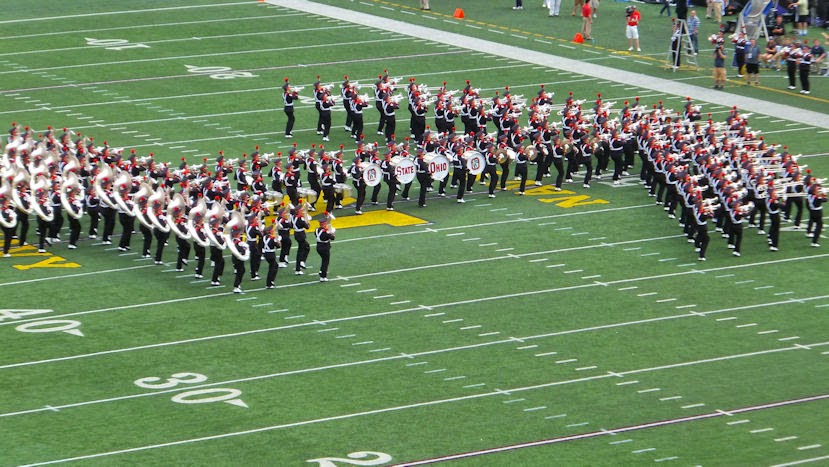 Then they busted out their trademark, the Double Script Ohio.  Gets me every time when they “dot the i.”

When the Ohio State band ends with double (or single) Script Ohio, it’s their version of doing the mic drop before walking off stage.

Oh yeah, there was a football game in there too.  After a nervous first half, when the Buckeyes couldn’t get out of their own way, they finally put a couple of TDs on the board and won 34-17.  Quite entertaining. 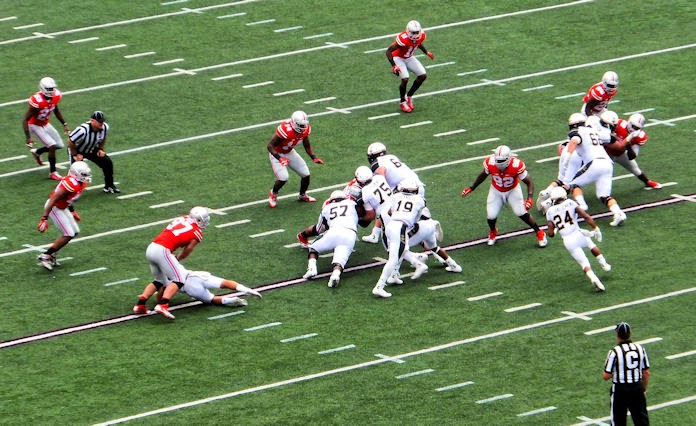 Because the Orioles were scheduled to play that evening, and the two venues share the parking lots, they didn’t want anyone hanging around too long for post-game tailgates.  We bolted pretty quickly and got away before the lot got gridlocked.

Had a decent day at the track on Sunday; I broke dead even over the nine races.  Of course, technically, I started off $26 in the hole if you consider parking, entrance, racing forms and a Pepsi, but it was worth it for four hours of entertainment. 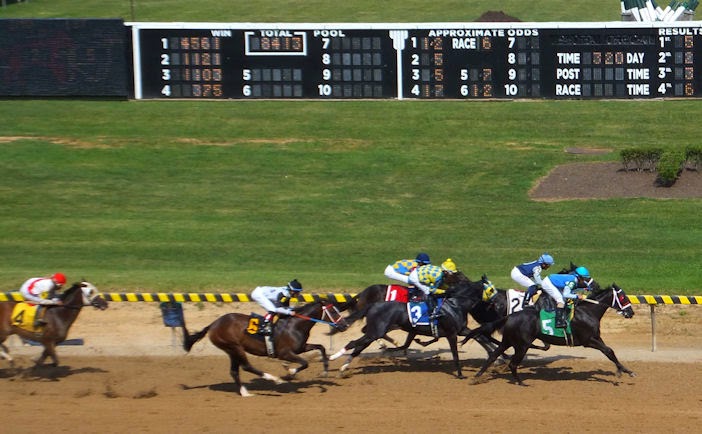 And because I’ve been so busy and it took me a couple of days to get this video loaded onto YouTube, I’ll include a quick clip of Boston from last Tuesday night, playing my favorite keyboard and drums extravaganza, “Foreplay.”

Email ThisBlogThis!Share to TwitterShare to FacebookShare to Pinterest
Labels: Baltimore Bluz, Picture This, The Family Business, The Glory of Meat