How to Spot a Knockoff Football Jersey

Last July, I wrote a post about how to spot a knockoff baseball jersey.  You know about the knockoffs, right?  They’re made cheaply, overseas, and at first glance, look just like authentic, licensed MLB apparel.  But when you look more closely, you can see the lapses in quality.

Today, I want to go over the same thing, only with football jerseys.  The topic came to the forefront here in Baltimore this weekend, when the Ravens had a Ray Rice Jersey Exchange, wherein Ratbird fans could bring in an official NFL Ray Rice game jersey, and exchange if for one that doesn’t pay tribute to a wife beater.

The operative phrase there was “official NFL.”  I wonder how many people brought their jerseys in for exchange, only to find out that they weren’t so official after all.  Just in case one of YOUR favorite NFL players goes off the reservation and you need to attend a similar exchange in the future, here are some ways you can tell if a jersey is an official NFL product, or a foreign knockoff.

In general, almost everything I said about the baseball jerseys is applicable to football jerseys.

The Collar
The knockoffs always get the collar wrong.  The proper collar should be stretchy and firm, like a tee shirt collar.  This is the correct collar: 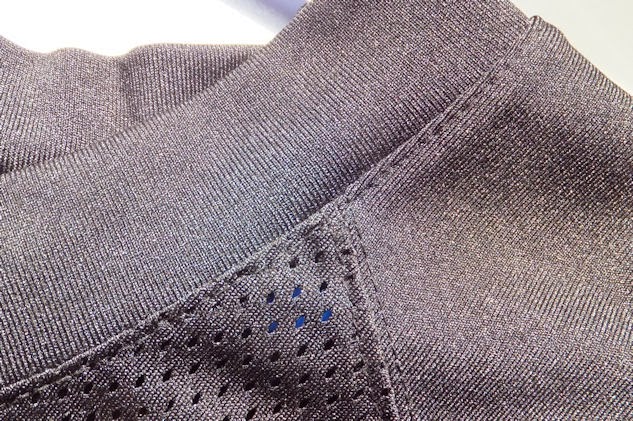 It’s kind of hard to tell, but the material is completely different between the collar and the shoulder piece.   That’s how it should be.  The collar should never be from the same material as any other part of the jersey, except the sleeve cuffs. 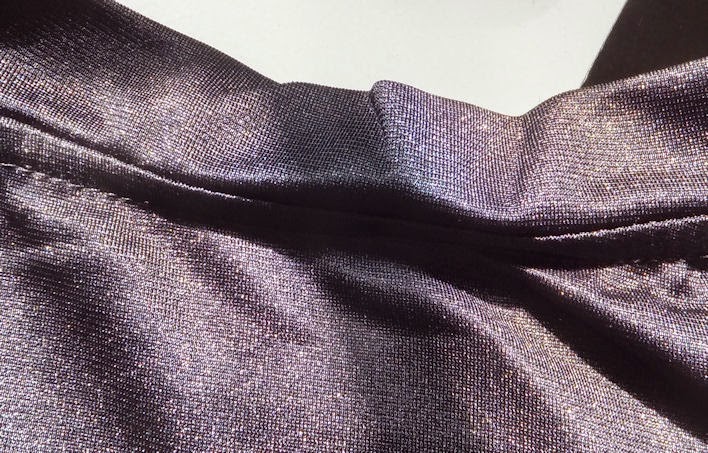 You can see above that the collar is the exact same material as shoulder piece. 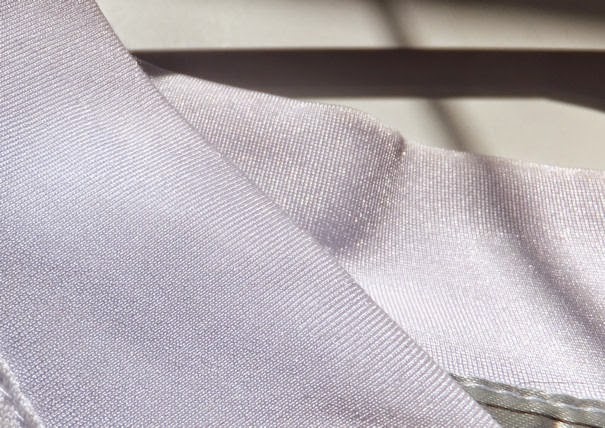 The collar needs to be stiff, not made from limp, satiny material. 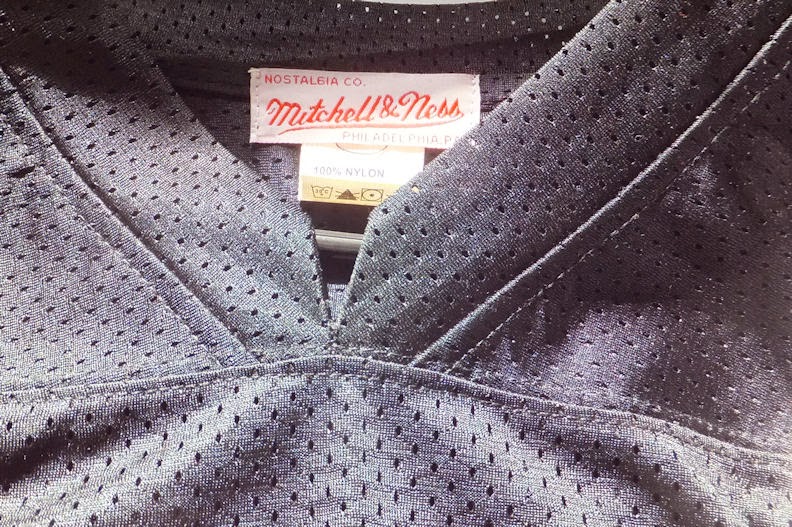 The collar should NEVER be made from the mesh material.  You can see here that the mesh collar split, because it has no elasticity.  (It needs at least a little stretch, to get over my giant dome.)

While we’re up at the collar, that’s also where we find “the shield.”  Whether it says NFL Equipment or is just the plain shield, it should be embroidered and not a cheap piece of plastic. 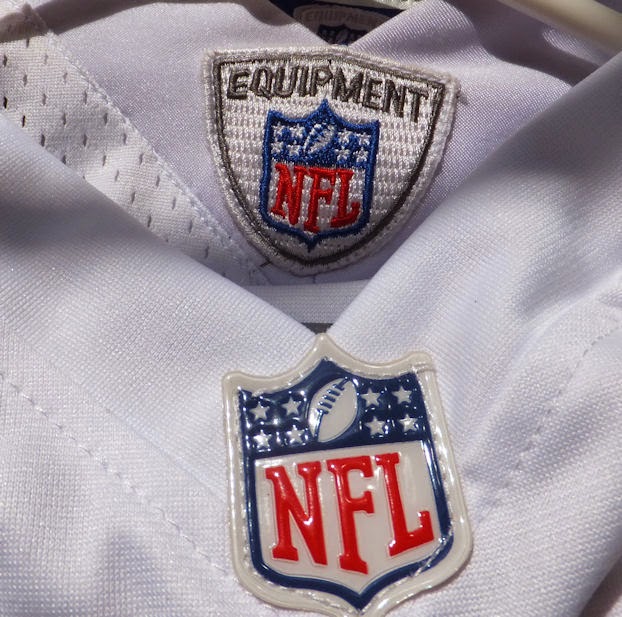 The Body
The non-mesh part of the body of the shirt shouldn’t be shiny and satiny, it should be sturdy.  The design varies from year to year, especially when they change manufacturers, (like the recent change from Reebok to Nike). 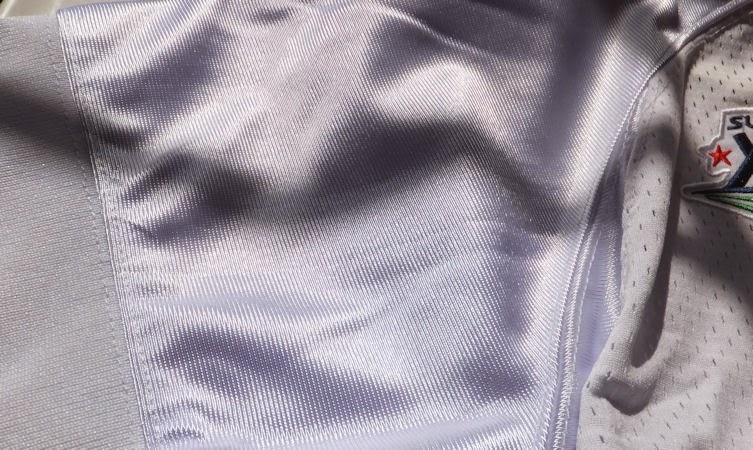 The mesh is fine and the sleeve is fine, but the fabric in between looks like a cheap decorative hankie.

Sleeves
I don’t know how they keep getting this wrong, but I don’t think I have any two jerseys were the sleeve stripes match.  You’d think they could just get the dimensions and roll with it. The one on the bottom comes from an authentic jersey.  The middle one, the inner black stripes are too thin.  On the upper, the whole stripe pattern is too small. 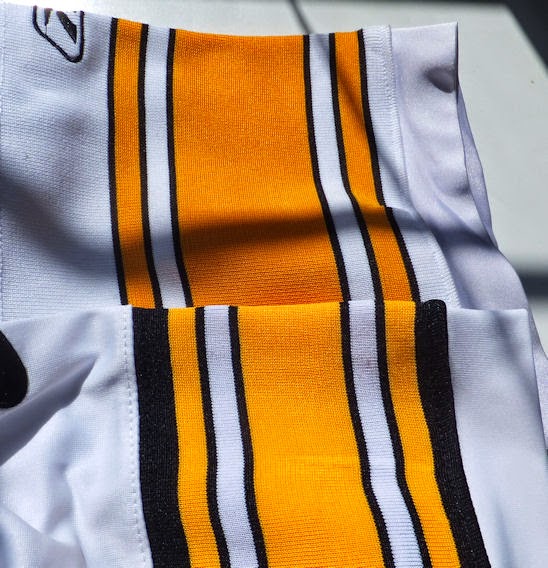 The thick outer black stripes are all wrong.

Logos and Patches
Not all teams have a logo or patch on their jerseys, but a lot do, and they’re good indicators of authenticity.  The Steelers have their emblem on the front of each jersey.  Here is how it’s supposed to look: 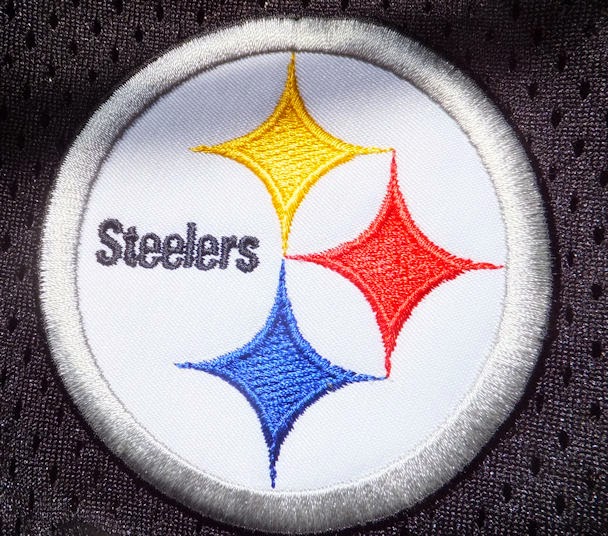 See how uniform the outer gray ring is?  And how there are no stray threads anywhere?  Compare the picture above to this one: Not only is there a black border that isn’t supposed to be there, it’s misshapen and unevenly sewn.  The three colored shapes don’t touch in the middle, as they should and the font is off on the “Steelers” text. 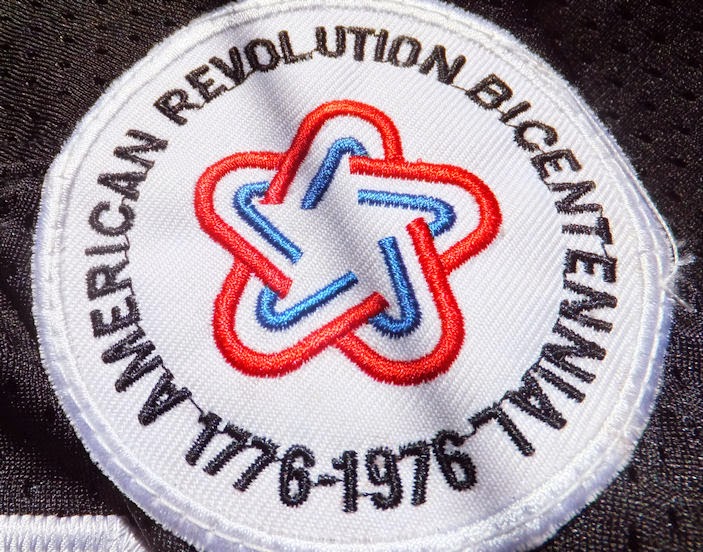 This is from a 1976 Super Bowl X throwback, when the Steelers wore a bicentennial patch.  Look at the stitching cheats, where there’s a black thread going from letter to letter.  The border here is poorly stitched and uneven, as well.

Lettering
Similarly to the patches, you have to watch the stitching on the lettering as well.

You can’t help but notice the big yellow thread cutting across the top of the “O.”  That’s not just a loose end, that’s stitched at each side… another sewing shortcut.  Also notice the uneven stitching and pulled threads at the bottom of each letter, especially on the “B.”

You also need to mind the size and spacing. 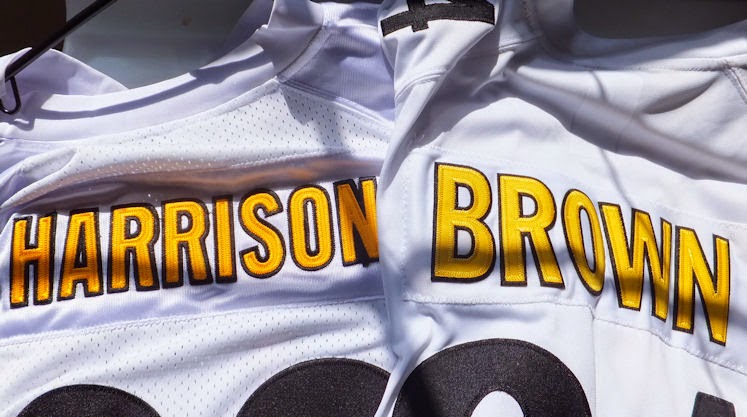 The Harrison lettering is too small. 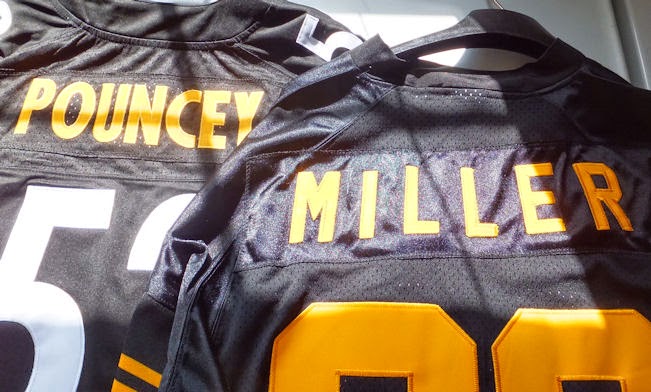 The Miller lettering is spaced too widely across the shirt.

That does it for today’s lesson.   Going forward in your online or in-person jersey shopping, you’ll have some things to look for before you spend your hard-earned money on NFL gear.  Or if you choose to go the “knockoff” route, you know what you may be getting.

And more importantly, if the Steelers ever have to run a jersey exchange, I hope they’ll hire me as a jersey inspector.
Posted by bluzdude at 12:04 PM

So, you're saying that my knock off hockey jerseys are cool, then?

Well, I never said they weren't cool. I think saving $280 on a single item of clothing is way cool.