I was watching some of the Palladia music channel over the weekend.  They often have some really good stuff, like major acts in concert, from past to present.  Saturday night, I tuned in to see Guns ‘N Roses.

To perfectly honest, it really should have had an asterisk after the name, because the only original members were singer/maniac Axl Rose, and rhythm guitarist Izzy Stradlin.  Guns ‘N Roses without Slash, Duff, or one of the old drummers really ought to be called Guns ‘N Roses*. 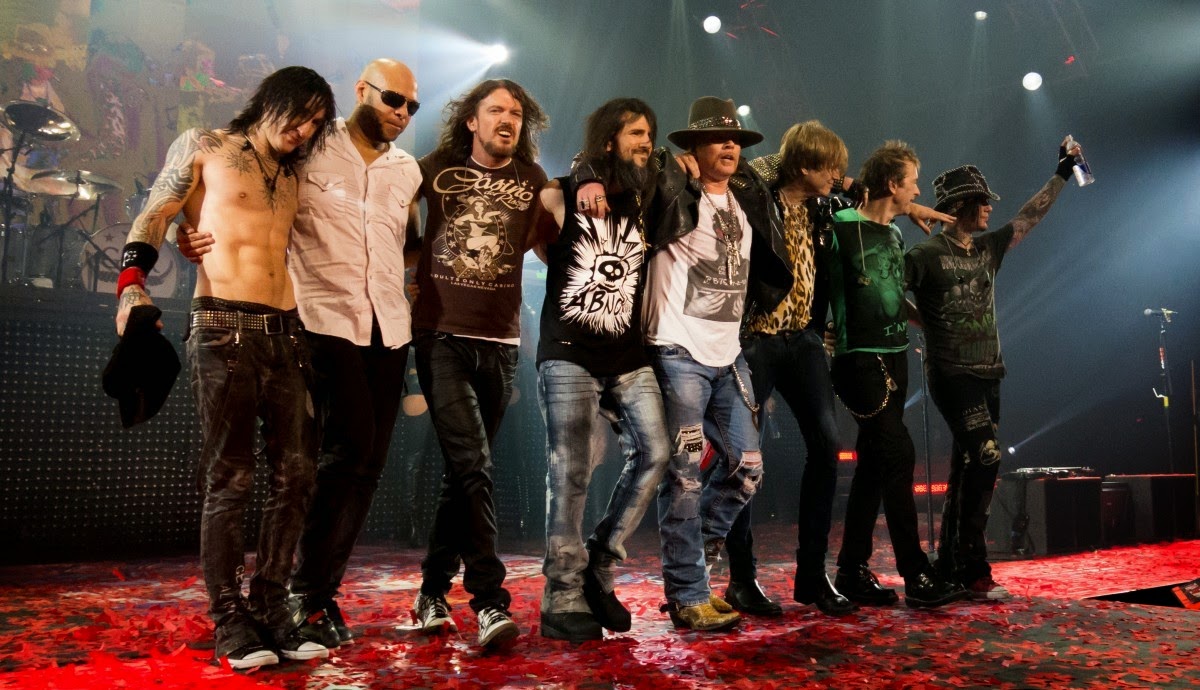 Watching this lineup was like seeing the Rolling Stones* without Keith Richards, Bill Wyman and Charlie Watts.  Or like seeing AC/DC* without Angus Young, Phil Rudd and Cliff Williams.  Van Halen without Eddie or Alex.  Or the Beatles*, without John and Paul.

Sure, Guns ‘N Roses* pretty much sounded the same, but they lacked that visual swagger that guys like Slash, Angus and Keef bring to the stage.  But it was good enough to switch to during commercials.

The Old Switcheroo
Speaking of switches, there was more trouble in the NFL this week, as Vikings’ running back Adrian Peterson was deactivated for a game, essentially for spanking his son.

Now I know there’s a very public anti-football player violence jag going on, but I think they should tread carefully here.  There’s a big difference between cold-cocking your fiancé and spanking your child.

Obviously, there were extenuating circumstances; in this case, it was that Peterson used a “switch,” or in other words, a tree branch stripped of its leaves.  He left marks on the boys butt and legs.

Was he too rough for a 4-year old?  Probably. It wouldn’t have been my choice to use a switch.  But whose decision is it on how a child should be disciplined?  While I’m usually against “slippery slope” arguments, this one seems like it’s covered in oil.

When does an outside party get to decide how a family maintains order?  And who gets to be the arbiter?  Those are some serious questions to be answered before we start meddling in how families function.

All I know about switches is what I learned from Richard Pryor.  According to Pryor, it wasn’t just getting beaten with the switch, it’s that they made you go out and get it from the tree yourself, and bring it back to them.  That’s some psychological drama, right there.

I don’t know about you, but I got my little ass beat a couple times, but good.  Dad never used any other implement but his hand, and believe me, that was enough.  I believe I got spanked twice.  Why twice?  Because I didn’t want a third.  The message was received.  But that was the culture in the 60s.  It was perfectly acceptable to smack disobedient kids not only at home, but at school.  And if you talked back to the neighbor, they’d give you one too.

Anyway, I’m not saying what Peterson did was right or wrong.  I’m just saying it’s not like the kid’s life was in jeopardy.  There are serious cases of abuse and neglect out there, where intervention is warranted.  This doesn’t seem like one of those times, to me.  And where’s the next step?  Will someone be called out because a third party didn’t like what he served for dinner?  Or what the kid is wearing?  Where does the non-parent parenting stop?

To be brought into the police station and arrested, and then to be suspended from your job, because you did to your son exactly what was done to you and generations of other kids across the country, seems like a big fat case of “Mind Your Own Freakin’ Business.”

If we’re going to collectively dictate how parents raise their kids, I also want action taken when someone’s little angel is running amok in public, while Mommy or Daddy is yapping on the phone, or peering intently at their next purchase.  If someone’s rugrat is screaming and tearing around my store,  moving stuff around, and smearing their sticky little hands all over my merchandise, I want that parent suspended… from their job, or from the ceiling.

Rice Appeal
I read that the NFL Player’s Union is appealing Commissioner Goodell’s indefinite suspension of Ray Rice, following last week’s TMZ video meltdown.  At first I was alarmed; like how can they possibly be so dense?  But then it came to me.

They have to appeal if they want concrete terms.  I suppose if I was a player, I’d have a problem with an “indefinite suspension” too.  Indefinite can mean anything… until next week, next year, or forever.

The league and the player’s union need to come together and agree on specific terms of discipline for domestic abuse, child abuse, and any other abuse that might turn up on TMZ.  That should take the mystery out of any disciplinary action.

The fact that the Commissioner has basically unchecked authority to do whatever he wants, leaves a huge gap in the pursuit of consistency.  Not only do the players need to know the consequences of any future actions, but so do the fans and media.  So when the next incident occurs, the league can point to the agreement and say “Here’s what is going to happen, IF AND WHEN the appropriate legal steps are completed.”

That way, the players are protected from an unreasonable media or fan base demanding action before all the facts are in, and society has predictable recourse from out of control, self-entitled jocks.

So appeal away and get the terms defined.  Then we can evaluate if the NFL is getting serious about their athletes’ behavior, or if it’s just so much window dressing, designed to mollify the masses until the heat dies down.
Posted by bluzdude at 6:58 PM

I have a black eye, broken jaw, cuts on my balls and you formed a panel on Social Responsibility.