On Monday, I wrote about my niece, Kyrie, expressing regret that she didn’t get to be a teen or young adult in the 80s.  As someone who was exactly that, it got me thinking about the relative merits of the era.  I decided to make a list of pros and cons, starting with Reasons Why the 80s Sucked.  So now, it’s time for:

REASONS WHY THE 80s WERE AWESOME!

Print.  In the 80s, newspapers still mattered.  Newspapers are still around, but are shrinking both in size and quality.  Any more, newspapers exist for senior citizens and crossword puzzle addicts (like me).  Books mattered too, and bookstores thrived.  New book releases were a big deal.  Stephen King and Dean Koontz (two of my favorites) were in their primes.

News.  Aside from newspapers, people got their daily rundown of information from the network news.  There were only three of them (plus PBS), and they mostly just reported on whatever happened that day.  If there was an editorial slant, it was far more subtle than you find today.  In my opinion, the disintegration of the news media into 24-hour partisan hyperbole is the number one cause for today’s hyper-partisan political scene, and resulting do-nothing Congress.

Partisan networks throw journalistic standards out the window and fire up the populace with perceived slights and offenses, which forces politicians pander to their intractable and hysterical base, which leads to a governing body clinging to the nonsensical platitudes that got them elected.  Then it’s no surprise when the two sides can’t work together for the common good.  All because the news media wants ratings.

I long for the day when news teams just told you what happened during the day while you were at work.

TV. There was no reality TV.  MTV still played music videos, which themselves, were often imaginative and highly entertaining.  Married With Children came out, which while crass, provided a viable alternative to the traditional, squeaky-clean family sitcom.  Dramas like Hill Street Blues and LA Law came out, featuring riveting, thought-provoking storylines and razor-sharp dialog.

Music. The new wave/gloomy music aside, the 80s contained a tidal wave of great rock and roll.  Just look at some of the groups who were in their prime in the 80s: Guns and Roses, Bon Jovi, AC/DC, ZZ Top, The Scorpions, George Thorogood, Joan Jett, The Georgia Satellites, Michael Jackson, Tina Turner, and Heart, who had a whole “second act” to their career.  Stevie Ray Vaughan’s entire career was in the 80s, and it led to a resurgence of artists playing the blues guitar.

The music had hooks and was played by real people, with real instruments and no auto-tune!  To be a singer, you actually had to be able to sing.

It was almost enough to make me forgive the 80s for also popularizing rap.

Movies.  CGI wasn’t around yet, so special effects in movies were mostly practical.

Think of the big movie stars who were in their prime: Bill Murray, Bruce Willis, Sylvester Stallone, Sigourney Weaver, Eddie Murphy, Michael Keaton, and directors Tim Burton, John Landis and Steven Spielberg.  James Cameron was well on his way to becoming a legend.

The 80s gave us the Airplane/Naked Gun movies, Indiana Jones movies, two of the three Star Wars trilogy, the first three Rambo movies, Gremlins, Beetlejuice, Bachelor Party and Splash, Porky’s, the first two Terminator movies, Aliens, the Back to the Future trilogy, Bill and Ted, Caddyshack, Stripes, Groundhog Day, Revenge of the Nerds, Beverly Hills Cop, Top Gun, American Werewolf in London, and all the John Hughes movies.  Mel Brooks’ History of the World and Spaceballs came out in the 80s.  Karate Kid. Johnny Dangerously. Lethal Weapon 1 and 2. Poltergeist, for cryin’ out loud!  Although I wouldn’t mind if they took back the clown. 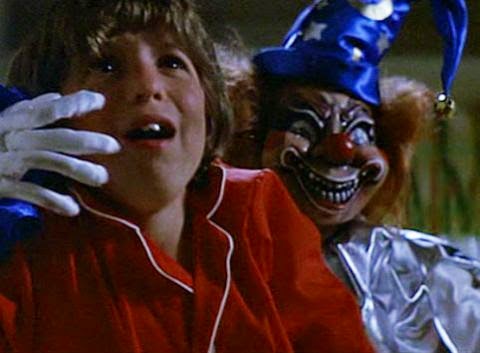 Sports.  There were fewer expansion teams diluting the talent pool in the major leagues.  And NASCAR was still an afterthought.

Vices. You could drink and drive without ruining your life, assuming you didn’t plow into the high school glee club. It was just the way you got your car home.  Underage drinking barely raised an eyebrow.  I can’t even count how many minors my dad got into hotel bars in Cleveland, when we were there for the annual Steelers/Browns game.  Or how many had drinks at our house, at Barn Parties.

(Like I said earlier, some pros could be cons and cons could be pros, depending on your point of view.  From the point of view of my 20-year old self, it was pretty sweet.)

I’ve heard that the 80s were famous for cocaine use, but I’ve never even seen it before in my entire life.  I guess rural NW Ohio is a long way from Studio 54.

Strip clubs were still fairly innocent.  And cheap.  You didn’t have to take out a second mortgage just to kill a few hours there.

Speed cams and red-light cams didn’t exist.  To get a ticket, a cop had to see you do it.  And as George Carlin once said, “You know my motto in traffic?  If a cop didn’t see it, I didn’t do it!”

Shopping.  Malls were still a thing.  Granted, once I worked in one, I didn’t care to go back, but you know what?  Malls provided jobs!  No wonder it’s so tough for teens and young adults to get work.  There’s a whole segment of the economy that’s missing.

Fashion. Granted, I’m totally unqualified to speak on fashion, but I have two observations that made the 80s awesome: Track suits were cool and men’s shorts were still short.  At least they didn’t come all the way down to your calf, which defeats the purpose of wearing shorts, if you ask me.

Politics. OK, Reagan was in office, but he was not nearly the deity that conservatives make him out to be.  Any current politician claiming to want to do the things Reagan actually did would be ridiculed by the right and driven out of the country club.

But it was a different time.  Despite major differences, shit still got done.  There wasn’t a hyper-partisan media, creating hyper-partisan politicians who use filibusters as a primary weapon rather than a last resort.  Opposing sides worked together for the good of The People.  They weren’t excommunicated for daring to compromise with the enemy.  ("Compromise;" meaning each side got some of what it wanted and no one got it all.)

Reproductive Rights. They were pretty much settled.  You could go into a Planned Parenthood office without having to fight your way through a screaming mob.  Would have been better if Plan B had been invented, but you can’t have everything.

Going back to what Kyrie said, the 80s seemed to be a time where people talked to each other more, and established more personal relationships.  I don’t think she’s wrong.

We had so many fewer distractions back then...  Fewer TV channels, no internet, video games were still pretty primitive, phones had cords.  Early cell phones were the size of bricks.

Today’s tech pulls people further into their own heads, which are usually pointed towards their smart phones or video games.  Without so many compelling distractions, maybe we reached out more to each other.

Or, maybe we were just trying to find out who had all the cocaine.
Posted by bluzdude at 6:39 PM

Even though I am on my PC (yep, I clearly belong in the '80s or '90s), my short story I just typed disappeared. Or at least I assume so, because I did not get the comment moderation message.

Anyway, I won't retype it all. But the gist of it is I agree with most of your post (I did like Depeche Mode, various other English/electronica bands, and NIN, so another pro-'80s point for me). Since I am younger than you, I hold the '90s in a similar regard (cable was $30 back then too!).

Thanks for the trip down memory lane.

So sorry about the Black Hole of Blogspot! Wish there was something I could do about that, because I'd love to hear what you had to say.

As you can see, I'm more of a traditional rock n roller, so I never formed a taste for those new wave/electronica bands. Sure sold a lot of them in the record store though...

I'm part of the "lost generation" who were too young to enjoy all the 80s action & too old to be included in the "X generation." I graduated high school in '92, so I did experience *some* of the 80s stuff, just not as a teen or twentysomething. I think we're on the same page for most of the music and movie pros, although you did miss one of my favs, "The Goonies." I mean, hello? :) And, I was (and still am, be still my heart) a crazy in love Bon Jovi fan. And, Heart was one of my first cassette tapes (yikes, that makes me old, too, doesn't it?), as was Michael Jackson's "Thriller." I should post some pics of my 80s/90s hair sometime. A feat only AquaNet was up for. Love both posts. Cool trip down memory lane.

I omitted The Goonies because I was in my 20s and it was kind of a "kids" movie. I think I saw it once and was kinda "meh." I don't think I was the target audience.s

I did see Ginger Lynn in a movie called "Poonies," though. I was definitely the target audience for that one...