The Summer of Bluz - By the Numbers

Back at the beginning of the year, while I was in the midst of great personal upheaval, I decided I’d make the last few months “The Summer of Bluz.”  I vowed to do fun things, go places, see stuff, and step out of my comfort zone.

Well, with the calendar about to flip over to October (and a couple of high profile birthdays… Hi Jess!), I figure it’s a good time to tally up the activities and see if The Summer of Bluz lived up to the hype.

Travels
The summer’s travel tally was four trips: one to Toledo to see my buddies, one to Pittsburgh for a wedding, and two to Florida to see my folks.  Sounds like a lot, but it’s really not any different from most other summers.  Only wrinkle was that 2nd trip to Florida, for my mom’s 75th birthday.

So the travel aspect is kind of a fail, although I do maintain that I’ve been trying to recoup the money I spent during the Winter of my Discontent.  I wasn’t looking for any big ticket trips or hotel stays.  Maybe next year.

Well, there is definitely a trip to Pittsburgh slated for the end of next March.  Sitcom Kelly and I (and her sister) have Penguins tickets, so we’re booked for a couple of nights dahntahn.  Pittsburgh bloggers, make a note.

But I have a ticket in hand to see comic folk singer Todd Snider later this month.  More on him as the date draws near.

Yes, I saw all of those movies by myself.  For “Lucy,” there was only one other guy in the theater.  When the movie was over, he left before I did, so I spent several minutes pretending I had my own personal movie theater.

I ran around and sat in different places, just to assess the view.  Like in the last row, against the wall, and then up in the very front section.  I was pleasantly surprised to see that the seats up there recline, so you can lean back and take it all in.  I still wouldn’t sit up there by choice, but it would do in a pinch.

Sports Events
Ah, here’s where I spent all my time and money.

This summer I went to 16 Orioles games, (which is a personal record, and I’m not done yet), 2 minor league baseball games, and the Ohio State/Navy game.  So that’s 19 games, plus Fridays ALDS Orioles/Tigers game, and Saturday’s Ohio State/Maryland game to come.  I’ve also got tickets to an Orioles/Tigers Game 5, if there is one.

Since the O’s games took up most of my time this summer, let’s take a closer look at the numbers.  (Here’s where my Sports Event Tracking Sheet comes up big!)

* The Orioles have won 10 and lost 6. (I rooted against them during the two games against the Pirates, so my rooting interest was 8-8.)

* I saw 8 games with Sitcom Kelly.  The O’s were 5-3 during those games, including the one that clinched the division, so the numbers say that Sitcom Kelly is not the bad omen she thinks she is.

* Six of the games were giveaway nights, which earned me three shirts, two bobble-heads, and a Wild Bill Hagy hat. 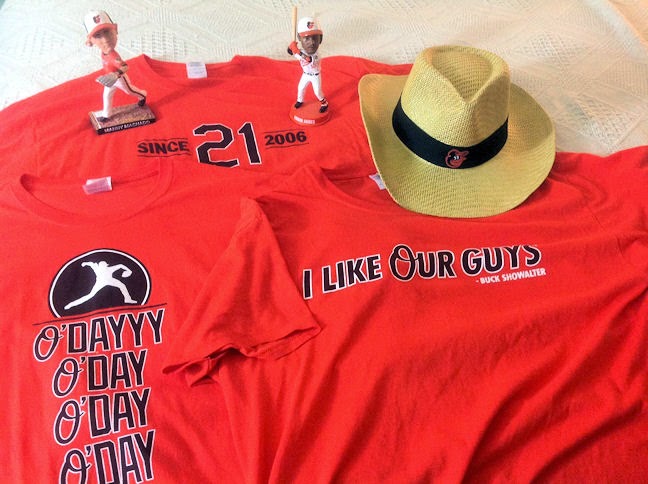 After adding these to the others in my closet, I have more orange t-shirts than any one man should ever have. Summation
Well, I didn’t do everything this summer I imagined I might, but I did pretty well, for me.  I never really stepped out of my comfort zone, other than doing the March of Dimes Walk for Babies.  But that was a first step.  (OK, it was four miles worth of first steps.)

I didn’t meet any new ladies, other than that gap-toothed gal down at The Bullpen, and the tiny, chesty blonde in the upper deck at Camden Yards.  But I admit I’m not hunting in a target rich environment.  I took a look at an invite to a Planned Parenthood Chocolate Tasting soiree, but was put off by the $250-$1000 price of admission.  Maybe once I become independently wealthy…

I went to my local sports bar for semi-regular Friday happy hours all summer, but not much came of it, aside from a full belly and a pleasant buzz.  Clientele-wise, it seemed to be the Dance of the Dead in there, when it’s not a football Sunday.

But I’ve enjoyed my summer and you won’t hear me complaining about it.  It was cool… so very cool, in fact, I never had to turn on the A/C once this summer.  That’s another personal record.  I don’t think I’ve ever made it past the 4th of July before.

So now, let’s see how I do with the rest of the year.  I almost called it The Fall of Bluz, but it sounds like I’m the Roman Empire.  And The Autumn of Bluz sounds like I’m at death’s door.  So I don’t have any snappy titles for this next period.

Maybe The Post-Summer of Bluz?  The Pre-Christmas Bluz?  The Year End Bluz?

I don’t know, I’ll just see what happens next.
Posted by bluzdude at 7:00 AM