Last Wednesday, I was watching the Penguins and following along on Twitter when I saw a tweet from the CFO’s daughter, my niece Kyrie.

You may remember Kyrie from this post, when she turned 16, this post, when she went away to school, and numerous pictures from my trips back to Ohio.  She is currently attending her sophomore year at my alma mater, Bowling Green, turning my crusty old Falcon heart all aglow.

Naturally, I had to answer:

Sure, I was just being a wise-guy, but I began to wonder… what exactly was the appeal of the 1980s?  I mean, I lived it, and I had my opinions, but why would a 19-year old college sophomore pine for the 80s?

The next night, I asked her via Facebook messaging. 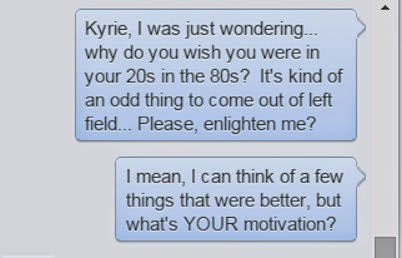 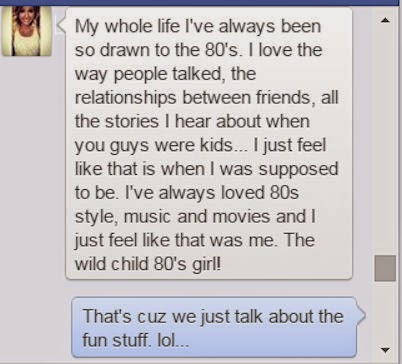 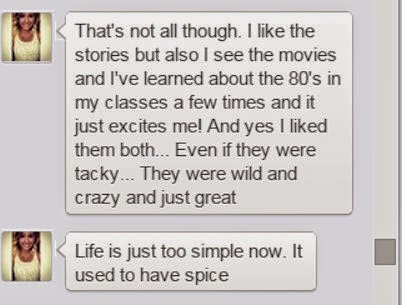 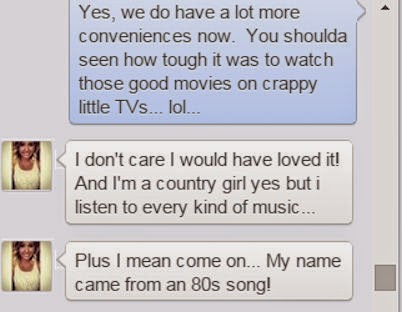 If it’s relationships and friendships she wants, she should reconsider my original tweet, and toss her cell and PC.  And get her friends to do it as well.  Because I think that’s the number one barrier to having true relationships and effective communication… people have to get their noses out of their cell phones, and relate to each other directly.  Face to face… eye to eye… that’s how you do it.  Forehead to forehead, not so much.

Anyway, the whole thing got me thinking… What’s the deal with the 80s?  Was it better or worse than what we have now?  And what better way to assess the era than with a Pro and Con Comparison?

Granted, these are highly subjective.  What is a pro for some is a con for others.  And I can tell right now that I’m not going to be able to do both pros and cons in one post, without making it 6 pages long, so let me start with the cons.

REASONS WHY THE 80s SUCKED
TECH

The list of things we didn’t have in the 80s is almost endless, but here are a few:

PCs / Word Processing.  Anyone that’s ever had to write a research report on a typewriter will get down on their knees and praise the invention of on-screen editing and spell-check.

Email. Instant communication from anywhere in the country, basically for free.  I lived alone for all of the 80s, mostly in a town separate from my friends and family. Email, IMs, Skype/Facetime, all of it would have made it so much easier (and cheaper) to keep in touch with loved ones.

Cell phones/Smart phones. Now we have phones that nobody talks on.  Instead they are pocket computers, electronic wallets and GPS’s.  I joke that it’s a “Con” that the 80s didn’t have these, but to me, the GPS alone is worth it.  In fact GPS should be its own category.

GPS.  See above.  I used to hate wrestling with maps, while flying down the freeway.  Now, all you have to do is do what you’re told, assuming your GPS is up to date. And now they even give you traffic updates and suggest detours.

Google.  We take it for granted now that we can find the answer to just about anything we want to know, just by Googling it.  No wonder we don’t remember anything anymore.  We don’t need to.  Common bar arguments have been slashed by instant access to facts and data.

Medical technology has grown by leaps and bounds.  I had heart surgery twice, and walked away the next day, both times.  Didn’t have that in the 80s.

Digital cameras.  Remember when you didn’t know if you got the picture until you dropped off the film, waited a couple of days, paid $15, and then finally looked at the pictures and saw that everyone’s eyes were closed?  No more.  Once you buy the digital camera (or use your smart phone), you can take multiple shots of the same thing, and then just keep the best one, for no further charge.  In the 80s, I had to use this: 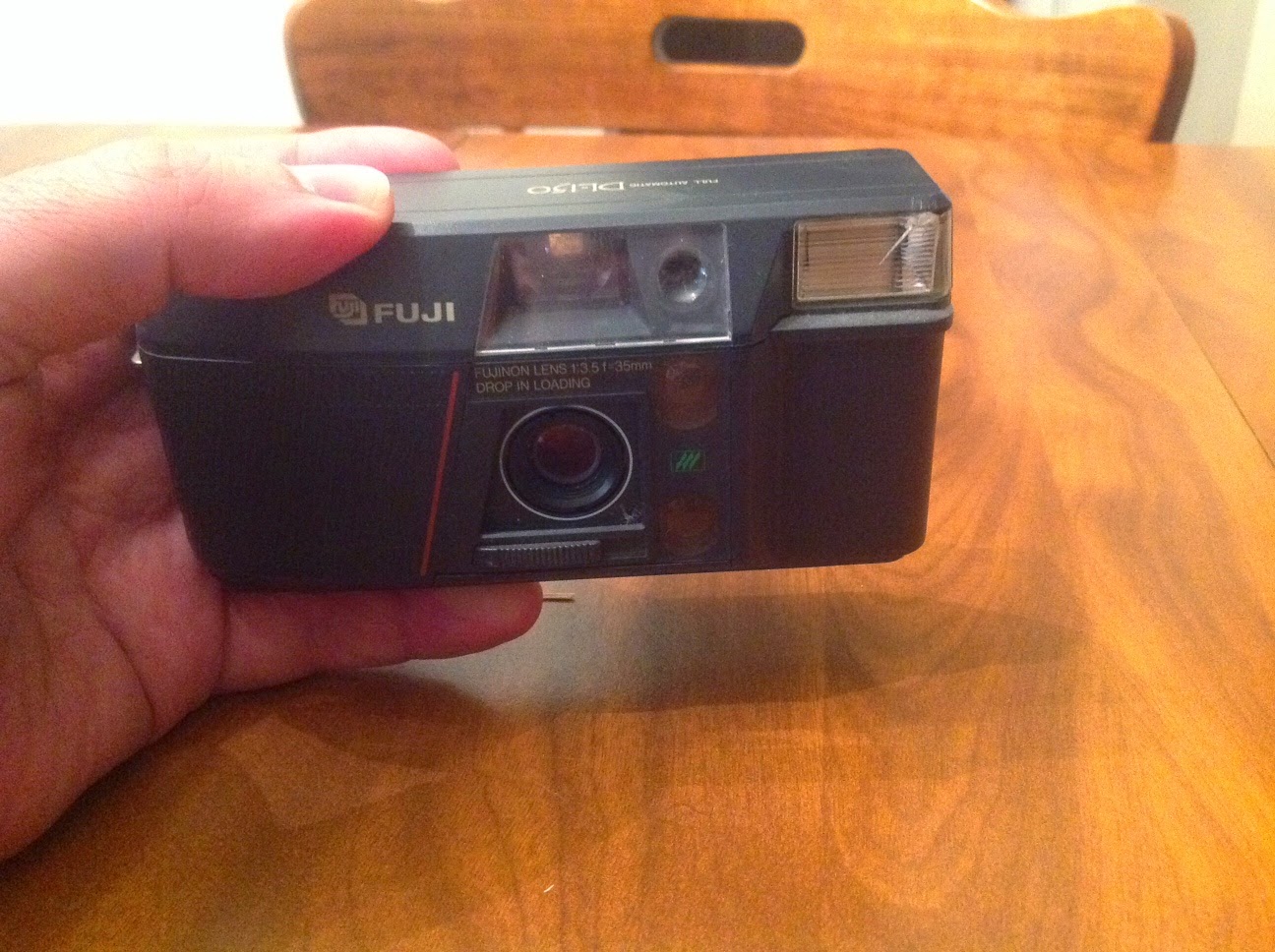 This was a 35-mm point and shoot camera that my brother got me for my birthday.  I took it with me to every concert I attended for 20 years.  No matter where I sat, I looked like I was 40 rows away.  And this was a good one!  A few years earlier, all you saw were those 110 instamatics, with the flash cubes you had to carry around.

Travel. This kind of ties in with PCs, but in the 80s, if you wanted to fly somewhere, you had to either call the airlines, (never knowing if they were giving you the best flight they could), or a travel agent. (Same concern.)  Booking flights and hotels online is a breeze.

TV: A “good” cable package got you around 60 channels, but the three major networks still dominated.  Fox was just getting started.  So there wasn’t nearly the number of viewing options that we’ve become accustomed to in the 21st century.

Also, the TVs were generally small and the pictures weren’t great.  My family had an anomaly… a very large projection TV screen out in The Barn.  Picture wasn’t bad then, as long as the lights were low.  But it didn’t hold a candle to what we have now, or even in the 2000s.

Movie medium.  In the 80s, both “Beta” tapes and LP-sized laser discs were around, but VHS was the dominant medium for movies (and taping TV shows).  The problem was the tapes would wear after enough use (or no use) and would sometimes stick and get pulled out of the cartridge.  Also, your prized favorite show or music video could easily be taped over by your parent, sibling or roommate.  DVDs, recordable and otherwise, are far more durable and the fidelity is phenomenal.

Less football.  The Steelers sucked pretty much throughout the 80s, which was quite unfortunate for me, living there in Cleveland.  But the NFL, while big, was not nearly as big as it is now.

In the 80s, you got 3 games on Sunday, usually two games at 1:00 and one at 4:00, and then a game on Monday Night.  If your team wasn’t one of those games, you were out of luck.  Now, you can either go to a sports bar, (or even a bar dedicated to your out-of-town team), or follow the game online.  Maybe even pull up a video feed.

Much less hockey.  If you were lucky, you got one game a week.  Living in Cleveland, (with no local team), I practically never saw a hockey game on TV.  In fact, even in the early 90s, I was visiting my parents in Green Bay during the Stanley Cup Finals, in which the Penguins were playing.  We had to go to a sports bar to see the game, because it wasn’t on network television.  The finals!

Music. While there was a lot of great music back then, (See the next “Pros” post), I blame the 80s for the mess we have today.  The gloomy synth bands like Depeche Mode, Joy Division and The Smiths, all came out in the 80s.  They set the stage for music to be more often “programmed” than “played.”

Hair.  Specifically, Big Fluffy 80s Hair!  It was like everyone had a beanbag chair-sized mop of hair on their heads.  OK, maybe I would have considered that a “Pro,” if I had enough hair to join in.  I had to covet the hair from afar.

Smoking.  You could still smoke in bars, airplanes, restaurants, office buildings and whatnot.  I hated that.  Just because I wanted a few drinks didn’t mean I want my eyes to burn and my clothes to smell like ass.

STDs.  The 80s ushered in the granddaddy of them all, AIDS.  And back then, an AIDS or HIV diagnosis was essentially a death sentence.  And I can help but think that if AIDS was striking businessmen instead of gay men and drug users, the Reagan Administration would have made a priority of AIDs research, instead of ignoring it until hundreds of thousands had died.

Well, that’s what I came up with off the top of my head.  I’m sure there are more, but that’s enough for now.  What didn’t YOU like about the 80s?  (No, not being born yet doesn’t count.)

I think most John Hughes films came out in the '80s, so that is a pro in my eyes! And I am sure you will cover this in the pro post as well, but I am 90 percent glad there were no digital cameras when I was in college. But I will say this: having pay for film processing made you really consider the pic you were about to take. I take so many crappy pics now, because what is the harm (other than missing out living in the moment).

For the record, once again while trying to post a comment on my phone, it disappeared. But this time I copied it first. I also could not edit my comment when I finished. I meant "to pay" and probably other thing! :-)

Spoiler alert... John Hughes films are definitely mentioned in the Pros of the 80s post.

Digital cameras are definitely a 90s / 2000s thing. I only wish I had more bad pictures from my 70s and 80s years. Of course, this way, I'm not open to as much blackmail.

I Grew up in the 80's born in 1979. So all of my younger years were 80's so for me the eighties were a blast. I think we had the best toys. He-Man, GI Joe, Transformers, Cartoons, ect. The 80's for a kid was the best era. We went out and played with our friends outdoors and got dirty. We didn't have electronics to distract us. I mean there was atari, nintendo, and sega but we were broke pretty much so those were luxuries for us. We did most of our damage playing toys or outside. I also loved the tv shows and movies(Goonies, ET,as well as many others) from the 80's. Sure they aren't what they are now but whats awesome about them is they bring us back to that time. The memories I have were awesome. Maybe as a teenager or an adult the 80's sucked but not as a kid. Ask any kid from my generation and they will say the same thing.

Well, it only "partially" sucked. I go into all of the upsides to the 80s in the next post.