This post is basically going to be a long “Director’s DVD Commentary” on the last one.  If you haven’t read that one yet, you probably should, or this one won’t make much sense.

Inspiration
After writing last month about getting the runs at a ballgame, I swear I had no intention of doing it again.  (That goes for both getting screaming meamies, and writing about the experience.)  Even as I was suffering through this episode, I was thinking, “Nah, I can’t blog this… I’ve already done it.  What else can I do with this particular scenario?”

I mean, I talk a lot of “shit” here, no doubt, but I really try not to talk about shit.

Of course my hesitation may have also had to do with the high likelihood of my making an unholy mess in the subway, my car, or in some poor homeowner’s bushes.  Some things are better left undocumented.

So there I was, long after going to bed, desperately seeking the solace of blessed sleep.  I was laying there, reflecting on my experience with The Little Man reaching his breaking point amid all the other passengers on the subway train, when a line of Star Trek dialogue occurred to me.

Scotty: Cap’n, we’re about to lose containment! We must evacuate or I canna be responsible for the safety of the crew!

As I began to form additional exchanges in my head, I realized I could tell the story, and make a parallel construction in the form of Kirk-to-Scotty dialogue, that even non-Star Trek fans would recognize.  That would sufficiently differentiate this shitty post from the last one.  Plus, I thought it would be funny.  And that’s when I decided to write the post.  (No, I didn't get up and write it then, I banged it out the next day.)

Art
My original visual concept, for when I finally made it to a bathroom, was to use that famous image from the movie Independence Day, when the spaceship hovering over the White House sends down an enormous stream of plasma and explodes the building. 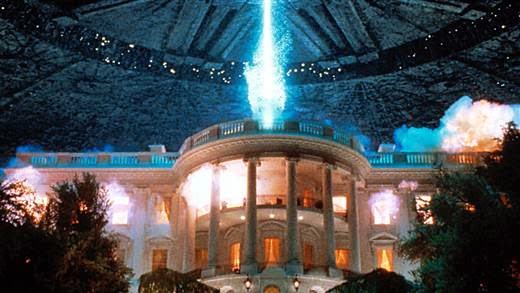 If my Photoshop skills were better, I’d replace the White House with a shattered toilet.

But later, I decided to stay with the Star Trek theme and use shots of the actual Enterprise warp core, in increasingly ominous states of emergency.  But the Independence Day image still cracks me up.

Oh, and FYI, the Sitcom Sisters take much better selfies that the one I posted.  Because the first couple of shots I ever ran of Sitcom Kelly had her obscured by various inanimate objects, it became a “thing.”  So I Wilsoned* the shot of the three of us, just to stick to the theme.

*If you’ve never seen the old sitcom “Home Improvement,” the lead character had a neighbor, “Wilson,” whose face you never saw throughout the entire run of the show.  He’d always either be on the other side of a high fence, or behind some other object.  Hence my use of the term, “Wilsoned.”

Causes
So why did this happen?

That’s what I’ve been wondering. There are a number of possible suspects.  Because I never ate anything all day before the game, it had to have been something from that afternoon.

Jalapeños: I had them before the first episode, at a midtown bar.  The second episode, I had, like, 5 slices on my nachos at the ballpark.  I’ve had them at the ballpark before, a number of times this summer and last, without an issue.  Also, I had them on an order of nachos the previous weekend, at my Sunday sports bar.  No issue.  So maybe it was the jalapeños, but it’s not consistent.

Hot dogs:  Yes, I had a crab and mac & cheese hot dog before the first episode.  And I had a lot of hot dogs at the all-you-can-eat snack bar at the ballpark.  All dogs were fresh and delicious.  And I’d have to think that the sanitary conditions at the ballpark (and bar) are better than those at the various street vendors, whose dogs, brats and burgers I’ve been eating for 10 summers or so, without a problem.

Beer: I had a large (32-oz) draft at the pre-game bar, one can at the game, and that was it.  I didn’t drink for the rest of the game.  That’s a far less quantity of beer than is usual for me before and during a ballgame.  Maybe there was something in the tap lines at the bar, but I doubt it.  This was a reputable place, 6 blocks from the ballpark.  It’s wasn’t an “anything goes” kind of place.

So what’s left?  What I believe may be the culprit…

Condiments: I only used 3 condiments, but 2 of them were out in the open.

I take mustard and relish on my dogs. The mustard came from the mustard pump machine, so I figure that was unlikely to be contaminated.  But the relish?  OK, same pump thing, but there was a tray underneath the spout that had a huge pile of it, with a spoon.  On two of my dogs, I spooned up some of that relish.  (It doesn’t come out evenly from the pump.)  That’s one possibility.

The other is the salsa I put on my nachos.  Again, it was in a big public bowl, on the nacho counter.  OK, for that matter, so was the hot cheese.  Every time I’ve gotten nachos, I’ve had the same stuff on them, including the times when Sitcom Kelly snaked us some nachos from that very stand.

Maybe someone sneezed on it or something.

Oh no.  Does ebola give you the shits?
Posted by bluzdude at 6:29 PM