I feel like telling a story tonight and since it’s the weekend, why not a party story?  Let me tell you about the first time I got stone-cold shitfaced drunk.

I was a senior in high school and only beginning to drink a little.  My friends were much more “experienced” at drinking; at that point I had only been out with them a couple times and we stuck to the beer that my buddy Rik’s older friends could get us.

On this occasion, my friend Brill was having the party.  His parents were out of town (natch) but he had a girl cousin from Canada that was visiting.  I thought Canada Cousin was very hot and I loved her accent.  I made it my mission to try to get cozy with her.

Everything started well as the group of us went out for dinner at Pizza Hut.  It was all very civil.  We went back to Brill’s house and began the drinking.  I don’t know where everything came from but there was a full assortment of alcohol from which to choose.

I started out with two Shoenlings Little Kings, which are these heinous little beers that came in 7-oz bottles. 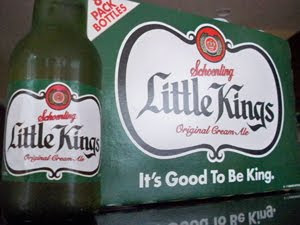 We used to get those because we heard they were strong.  So I was working on my Little Kings and talking charmingly to Canada Cousin.  We seemed to be hitting it off.

After the Little Kings, someone broke out the wine… a big bottle of red Lambrusco. 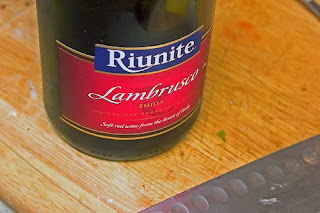 I had two glasses of that… my glass was about 16-oz and both times it was about 3/4 full.  I began to grow more animated and entertaining.  Canada Cousin would no doubt be all over me any minute!

After the wine, I had two helpings of Black Velvet… same glass, about half-full.  (Cue ominous sound effects and screams from off in the distance.  And a lightning strike flashing in the window.)

I don’t remember too much after that.  All that alcohol began assaulting my system and I was completely unprepared for it.  I’d had a nice beer buzz or two in my experiences prior to that night and they were nothing like this.  It was like, I could think… I just couldn’t speak or move properly.

The rest of the night was just a series of moments of hazy lucidity.  At one point, I went upstairs to throw up.  The way I remembered it, I got my face right down in the bowl and quietly hurled up all the sick.

According to the EPA hazardous spill cleanup documents filed with the government, the bathroom looked like someone stuck a nauseous monkey on a rotisserie and cranked it up to 78-speed.  (Note to those of the CD generation <coughCassiecough>:  That means spinning really, really fast, like old vinyl records.)  Brill said they were finding bits of mushroom stuck to the walls, the tub, everywhere.  He and Canada Cousin did the cleanup.  Who says I don’t know how to impress a girl?

I vaguely remember being out in the back yard, leaning up against the clothesline pole, with someone trying to get me to drink some black coffee.  (I hate black coffee but I was too drunk to ask for cream and sugar.)

Here, again, is where my recollection differs from reality:

My point of view:  Rik packed me into his car and drove me the two houses down from Brill’s, to my house.

Rik’s point of view:  He packed me into his car and drove around the block a couple times, stopped by our buddy John’s house, had a few beers out in the yard with John, and eventually, drove me back home.

Remember, I lived in this old farmhouse.  My bedroom was at the top of a very steep staircase… and there were 17 stairs.  That meant 17 opportunities for disaster.  My parent’s room was directly across the hall from mine.  They were in bed.

Knowing how unsteady I was and how steep and long our staircase was, Rik followed me up the stairs to make sure I got to my bedroom without rolling ass-over-elbows right back down.  Once deposited in my room, Rik got the hell out of Dodge.

My dad, upon hearing two sets of footsteps coming up the stairs, comes out to investigate and finds his drunken son sitting on the edge of his bed, trying to sit up straight.

Dad:  You been drinking?

Dad gave me a disgusted look and went back to bed, leaving me to lay back on my bed and try to go to sleep, all the while clutching the covers lest it throw me off while it was spinning out of control.

The next morning was tough.  I was incredibly hung over but had to get up and go to work at the grocery store. 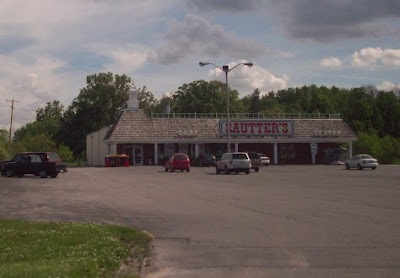 I made my way unsteadily down the stairs.  Mom was fixing breakfast; Dad was at the table.  There may have been a bottle of Jack Daniels on the table, for my benefit… or that may have been another time under similar circumstance.  Not too clear on that now.

Dad: What the hell were you drinking last night?

Dad: What kind of wine?

Me:  And two glasses of straight Black Velvet.

Dad:  Jesus!  What the hell’s the matter with you?  You don’t mix beer, wine and whiskey in one night!

Me: You never told me that before.

Dad: I never thought you’d be dumb enough that I’d have to.

I was kind of surprised that I didn’t get into any major trouble.  But their rationale was that I’d be suffering enough that day and didn’t really need any more grief.  I’d learn my lesson.

That was true enough.  Now I had to go off to the grocery store and work 9-5 bagging groceries and taking them out to the customer’s cars.

Once there, I made a huge mistake though… I told the Evil Ann, the Head Cashier, about what I’d done the night before.  Did I get any sympathy?  Hell no.  She spent the rest of the morning smashing grocery carts together behind me, then cackling like a mad woman when I’d whip my head around, then grab at it in pain.

The best part of working on Saturday mornings was the bakery was going full steam.  Every time you’d come back into the store, you could smell the bread baking.  I paid a visit to the bakery at lunchtime and the ladies there, who were much nicer than the cashier, fixed me up with a loaf of French bread, straight from the oven.  I propped it over my shoulder like a rifle, grabbed a bottle of Squeeze-Parkay and marched back to the break room. 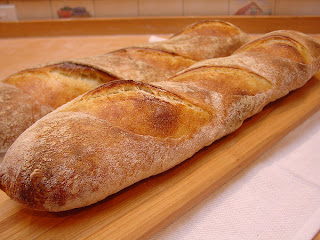 Man, that bread sopped up all that badness and left me feeling almost human again.  I ate the entire goddamned loaf.

Man, lesson learned!  I very rarely mixed again, and only if I’d only had very little of one of the offenders.  And I also learned about the curative powers of fresh-baked bread.

But I wonder why I never heard from Canada Cousin again?
Posted by bluzdude at 8:54 PM