Like in many cities, Baltimore is weighing the value of requiring police officers to wear body cameras.  In fact the city council already passed a bill requiring it, but the Mayor vetoed it.  They both want the cameras, they just differ on timing and logistics.

At least, I used to think that.  Now I don’t know what to think.  The Eric Garner case in New York changed everything.

When I wrote about the Ferguson case, I called bullshit on multiple parties, mostly because no one really knew what happened.  Everyone was talking about it, but no one actually knew anything.  My appeal was for patience, to see what the actual evidence was.

And you know what?  If the evidence that was presented by the prosecutor was true. I don’t see how they could indict.  The evidence did not sync with the “eyewitness” stories that were being blasted on TV.  It DID sync with other evidence and witness statement from people that were not yapping into a camera.

I know there are a lot of factors at play, but it comes down to, “If you don’t want to get shot by a cop, you probably shouldn’t swear at and then physically attack a cop.”  That’s just common sense.

It’s a shame it all played out that way, but the evidence (again, if legitimate) was convincing, at least to me.

The biggest factor that made the Ferguson case blow up was that there was a combination of a fatal incident, eyewitness talking to the media (social and otherwise), and a lack of real-time documentation.

That’s where I thought a police body cam could have saved a hell of a lot of uncertainty.  Once everyone could see that a huge kid cursed at and then attacked a cop sitting in his squad car, you’d see the shooting was justified.  OR, if you had seen a cop put 6 shots into a kid who has his hands up, you’d see an indictment and trial.

And then came the Garner case.

Here, we have a cop using a banned choke hold on an unarmed guy who was just standing there, for the crime of selling single smokes, which is barely a notch above jaywalking, ignoring his pleas that he couldn’t breathe until the guy dies right there on the sidewalk, and the whole thing is on video.  And they STILL didn’t indict the cop. 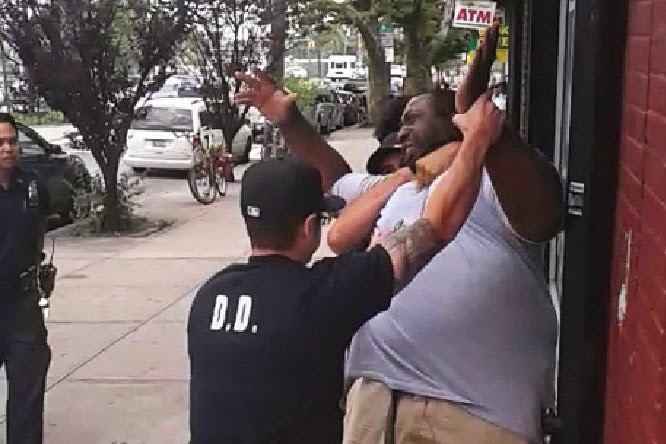 Eric Garner, about to not be able to breath.  (Source)

I just don’t see how that’s possible.  What is it that has to happen, before it’s the cop’s fault?  Kill a dog, while he’s at it?

So no, it’s not like putting body cams on cops is going to solve everything.  To even make a dent in the mistrust between the police and minority citizens, it’s going to take far more complicated solutions to address the root of the problem.  It all comes down to poverty.  Here’s why…

We’ll never solve the mutual mistrust problem when with an overwhelmingly white police force policing an overwhelmingly black (or Hispanic) population.  And dropping a few more token minorities onto the force is not going to cut it.  There has to be a significant, visible difference.

But it’s not like even if they wanted to, all the dudes from the neighborhood can just go sign up and be issued a badge.  They have to meet physical requirements, take an entrance exam which may or may not be biased towards white applicants, go through training, and pass another test.

I’m betting a significant percentage of the candidate pool haven’t had the best education, which might have helped in passing a test.  A lot of these city schools aren’t exactly shining jewels of educational excellence.  It’s all teachers can do to keep kids’ butts in their seats, sometimes.

And why is that?  Maybe because the kids haven’t been eating well, or maybe they’ve been out all night on the street, or maybe they’re afraid of enjoying the act of learning and getting labeled as “not keeping it real.”

And where does all that come from?  Poverty.  No money, no food, no toys or books or laptops.  No kid is going to thrive under that kind of stress.  Meanwhile, the older poor kids are pressuring them to come out and hustle, to make a few bucks... just watch out for the Po-Po.  Thus begins the mistrust, if it hasn’t already been handed down from preceding generations.

Now, I’m not trying to generalize, and there are obviously exceptions everywhere, but this is a problem that will not be solved by exceptions.  It requires institutional change, not Band-Aids or body cams.

How is that going to happen?  A good start would entail the creation of some real jobs, paying a realistic wage.

“Like what,” you say?  Well how about construction jobs?  We only have mile after mile of crappy roads and thousands of bridges that are falling apart.  Remember that one that collapsed in Minnesota, a few years back?  There are thousands more in the same rotten shape.  Why wait for the next tragedy before we act?

A jobs bill could set aside funds for all kinds of highway projects, but not only that, how about setting up an apprenticeship program, to learn the applicable skills?  Start at one wage, during a fixed apprenticeship, then add a few more bucks upon completion.

The thing is, these can’t be McJobs; they have to pay off better than dealing or hustling, or else they’re doomed to fail.  There has to be a viable alternative to a life of rotating between crime and jail time.

We do this, and it’s a win/win.  People who need jobs can get them and make a living, and our roads and bridges are brought out of “death trap” status.

That’s one idea, and I’m sure there are more to be had.  So why hasn’t anything like this been done yet?  You might ask the GOP, who has blocked every jobs bill in the last 6 years.  You see, their clientele isn’t interested in jobs bills, they’re interested in tax cuts for businesses.  Construction workers aren’t giving millions of dollars to their re-election campaigns, the Koch Brothers are.

As far as they’re concerned, the solution to police versus citizens issue is to build more prisons.  Now that’s a jobs bill they’ll support.

This is a problem that’s not going to get better just by hoping it goes away.  How many more people have to die?  How many more shops, cars and houses have to get torn apart?  How many more grand juries must we convene, before we recognize that mutual suspicion and antagonism is not a basis for solid law enforcement?
Posted by bluzdude at 8:49 PM

BRAVO! Jobs and training, absolutely. Now, how do we create nationwide, gut level attitude change? When will white people stop fearing black men? When will black people stop identifying as victims? No answers but time, jobs, education and mutual respect. May take longer than snapping a picture.

I'm so on the fence about all of this. I think that Eric Garner is a sad, sad case. I don't like that Ferguson is what sparked the anger. I think Tyvon Martin was more upsetting and unjust. (Completely off topic, sorry.)

Anyhow. Pittsburgh just passed budget and all the officers here will wear body cameras. I'm happy about that. I mean, it's something. It's trying. The whole situation is fubar. Just fubar.

Yes...facts count...don't attack a police officer and then cry wolf. Reason won here. Also don't bang someone's head into the concreat and expect them not to fight back. That said, there are indeed countless cases of unwarranted police brutality against blacks and whites. I myself know someone killed for answering the door with a pellet gun. He was white. Fake guns are threatening too...in this day and age.