Only one more partial day of work and them I’m off until the first week of January.  I’m so excited.  Not that it’s been a particularly exhaustive month.  As I’ve mentioned, I’ve been taking every Friday off.  I’ve been on 4-day weeks since before Thanksgiving.  (Man, January is going to SUCK, when I have to go back to a regular work week!)

I like to save up my time off and use it at the end of the year.  December is like a dessert, after my year-long meal.  (Geez, ya think I’m obsessed with food much?)  Anyway, it’s like, I work hard all year, so a light December is my reward.  Now onto some stuff…

Hittin’ That Jay
I’ve mentioned before that my parents get us a special ornament every year.  They currently subscribe to Danbury Mint’s Ornament of the Month program, which yields a delicate gold ornament every month.

About 10 years back or so, Danbury featured a line of exquisitely detailed and painted ceramic birds.  Somehow I ended up with 5 of them.  Because I liked them too much to only put on the Christmas tree, I hung them from the 5 arms of my dining room chandelier.  They stayed there up until temporary girlfriend moved in last January, and was aggressively unimpressed by my sense of decorating whimsy.

So with her gone, and me burrowing into my Christmas decoration stash a few weeks back, I decided to put them back up on display.  The only problem was I didn’t have any hooks with which to hang them.  I carefully unwrapped each one and put them on the dining room table, making harsh mental notes to myself not to drop anything on them, lest they chip, break or shatter.

The birds managed to survive to the next day, when I came home with new ornament hooks.  But then, when I went to hang up the first one, the blue jay, I missed the bird’s string loop with the hook, and dropped it on the table.

I was horrified and unbelievably angry with myself.  I never drop or break stuff, ever!  And I wasn’t even drunk!

I inspected the bird and found that only part of the tail broke off.  I found the remnants, in two pieces.  It was a big relief!  This, I could fix!  I’d done it before, under much more trying circumstances. 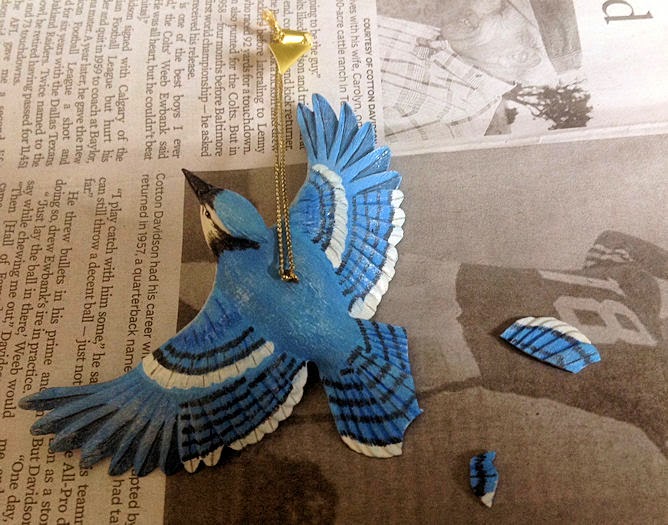 Back when we lived in Ohio, we went away somewhere, to California, I think, and were gone for a couple of weeks.  Even though we had our neighbor coming over every day to look after him, our cat Amos was not at all happy with us.  And whenever he wasn’t happy, he would knock stuff down.

As it was, he picked a porcelain figurine of a mother holding her baby, and knocked it off a high window shelf.  This was one of my mother’s cherished possessions.

Well, it was almost curtains for Amos.  That was a cat in the doghouse, that’s for sure.  But wait… in rushed #1 Son, to try to save the day.

The saving grace was that the statue was in mostly large pieces, I’d say 6-8 of them.  With a little super glue, I thought I could put it back together.

So, I sat at the dinner table, with a bright light overhead and a worried mother hovering ‘round, I was able to put Humpty back together again.  Mom was thrilled, and Amos, well, he never did say thanks.  Cats…

So, with this in my (35-year ago) back pocket, I figured fixing this blue jay would be a breeze.  I just had to go out for some super glue.

Last weekend, I finally had all the components: super glue, time, patience and good light.  I got some newspaper down and a cloth to wipe up any excess glue.  Had to be sure I didn’t end up with my thumb stuck to my head or something.

The tail pieces actually went back together fairly well, considering I could hardly tell if any glue was coming out. 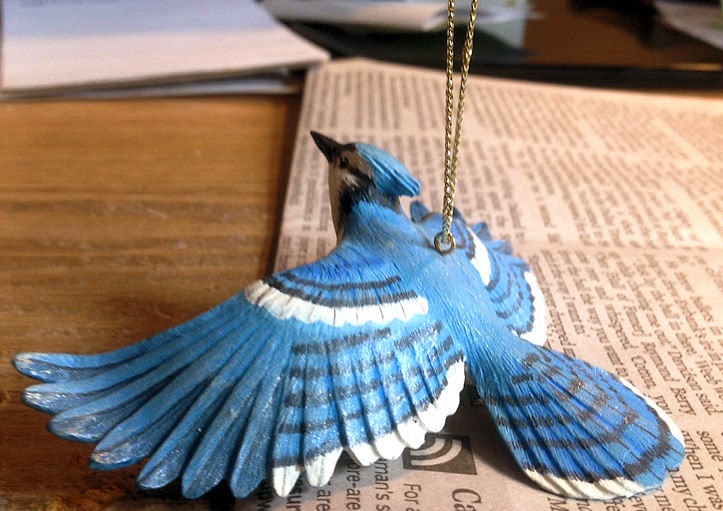 But it’s funny… the lengths I’ll go to, just for a little piece of tail.*

Fox “News” Stone Cold Busted
As you well know, I’ve always been a harsh critic of Fox “News,” not just because of their obvious partisan hackery, but because they selectively and dishonestly edit and present their video and graphics.

Last weekend, the local Fox affiliate in Baltimore ran a story on one of the police shooting protests, but edited the crowd’s chant from “We won’t stop. We can’t stop ‘til killer cops are in cell blocks,” to make it sound like the chant was “Kill the cops!”

It wasn’t long before people who were involved with the protest confronted Fox with other original, unedited footage, and demanded an apology.

Fox invited the protester onto their show and sort of apologized.  Their statement said “Fox45 is apologizing for an error made on Fox45 News at Ten.”

I’ll tell you this right now, that was no “error;” that was exactly what they meant to do.  What they were sorry about was that they were caught doing it.  One doesn’t take the trouble to splice footage together and accidentally change the meaning of the audio.  That takes editing skill, want to, and a complete lack of journalistic ethics.

Fox doesn’t care about journalism.  They are not journalists.  They are opinion makers, pure and simple.  They rearrange facts to suit their motives, in this case, to make white men even more afraid of black people, black men in particular.

Remember when all those tea party whack-a-loons were out defending that rancher’s right to steal government property via squatting on it?  Remember how all those white guys were pointing guns at the police and federal agents?  And remember how Fox criticized them and called them lawless thugs and hooligans?

No, of course you don’t, because to Fox, those were great patriots seeking liberty, so they blamed Obama for enforcing a law which was actually enacted by the Reagan Administration.  Think it was just a coincidence that all those guys were white?

My point is; Fox doesn’t care about accurate or honest reporting.  They care about making you think what they want you to think, which is that all your problems are the Democrats’ fault, so you should vote Republican.

Their job is to give you a reason to vote for a group who will work against your financial interests.  That reason is fear… fear of blacks, fear of foreigners, fear of non-Christians, fear of gays, fear that they’re going to take away your guns, and fear that other people are getting special benefits that you’re not.

This editing “error” is just one more brick in the wall of evidence that Fox “News” cannot be trusted.

Say it Ain’t So, Joe
It was with much sadness that I heard of the passing of singer Joe Cocker.  The guy didn’t have the classic singer’s voice, but he was certainly unique.

When many people think of Joe Cocker, they think of that time on SNL, that he sang a duet with John Belushi, who was doing a stellar Joe Cocker imitation.

For me, I always think of this brilliant clip, which I’ve run before, but makes me laugh out loud, every single time I see it.
Rest in peace, Mr. Cocker.  I hope you finally found some Wonder Loaf.**

*If you think the only reason I told that whole blue jay story is so I could use that “piece of tail” joke, you’re right.

**To understand the reference here, and in the post title, play the clip.
Posted by bluzdude at 7:32 PM