Geez, you do a couple of posts about the stuff you’ve been doing, and the rest of the world goes right down the shitter while you’re busy.

There is a new Public Enemy #1 out there now, and its name is Planned Parenthood.  Now if you’ve been with me a while, you know that PP is an organization that’s near and dear to my heart.  I’m on their mailing list and I make periodic donations.  So when all this video stuff broke, it was pretty alarming.

At least it was until I did, like, seven or eight second’s worth of research and saw that this “sting” video was nothing but a political assassination piece produced by ardent anti-choice activists with the explicit intention of ending Planned Parenthood (and by proxy, abortions), by any means necessary.

These “filmmakers” posed as other people, lied to their interview subjects, guided the conversation until they got some sound bites they could project in the most unflattering light, and then constructed their own narrative through selective editing.  (Like editing out the 10-11 times the interviewee specified that they were not “selling baby parts.”)

So I figured, people will understand that this is a hack job and all will be well.

I don’t know why I figured that.  I should have known better; that people are only too eager to think the worst possible things about those whose actions they condemn.

These videos are political propaganda; nothing more and nothing less.  And with this brand of mass communication, statements being true, false, or out of context don’t matter.  That they’re being said, and megaphoned out into the public arena is what matters.

It’s like that scene in “Jaws,” where the Mayor explains the difference between yelling “barracuda” (“People go “huh?”) and “shark,” (“You have a panic on your hands on the 4th of July.”)

Most Americans don’t go to the trouble of finding out if the claims are true if it plays to their viewpoint.  And the anti-choice politicians are only too eager to run with it.  In fact, there are two congressmen who were quoted as saying they’d seen the first video two weeks before it was released.

I think I know the reason for that.  It’s my opinion that it was political operatives who set the whole thing in motion.  Maybe a congressman, maybe a close aide.  But I think someone buttonholed these “filmmakers” and said, “Just get us something we can use.  Get us something so hideous and so grotesque, that Americans will rise up and demand the end to Planned Parenthood.”

And look what happened.  There were calls in the House to defund Planned Parenthood before the credits rolled.

I’ve mentioned this before, in a larger discussion of the abortion issue, that the key to reducing the number of abortion is birth control on demand and sex education, both of which are available at Planned Parenthood.  So it’s a quandary that anti-choice people so often fight to limit those preventive measures.  They should be doubling the funding for PP, not reducing it.

And after the baby is born?  Forget it.  Conservatives don’t want to know about any of that. 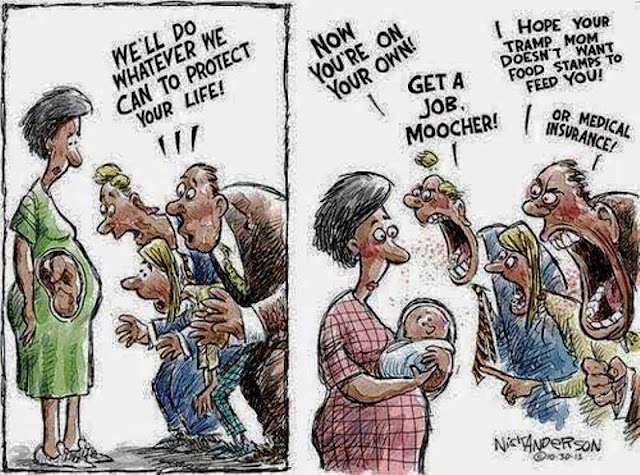 They couldn’t un-legislate Roe vs Wade, so they’ve taken the circuitous route to eliminating Planned Parenthood.  They fight every year to eliminate funding.  They legislate requirements that doctors provide medically unsound and downright false information to patients.  They fight to eliminate the chemical used in abortion pills.  They use zoning laws and building spec requirements to shut down clinics. They require doctors who perform abortions to have hospital admitting privileges, where this requirement is found nowhere else.  In fact, giving birth is statistically more dangerous than an abortion, yet you can give birth at home with no doctor if you want.  Do you think a urologist performing a vasectomy has to have admitting privileges?

When they’re successful at closing down a clinic and women have to drive five hours or more to get to the next closest one, they don’t see it as an undue burden.

Then there are the required waiting periods, which can necessitate either a hotel stay or a second round of 5-hour drives, and they don’t see that as a burden either.  It’s just some slut, after all.

And they do this because your action offends THEIR moral sensibility.  They do not give a flying fuck about yours.

Last week, Mike Huckabee was quoted as saying, “I think the next president ought to invoke the fifth and 14th amendments to the Constitution. Now that we clearly know that that baby inside the mother's womb is a person at the moment of conception.”

Mike, we don’t “clearly know” any such thing.  The moment of life is an ongoing moral dilemma and a very personal one.  I happen to think when the two cells intersect, it’s a science project, not a person… not until much later.  Who are you do decide this issue for everyone else?  In fact, until you grow a uterus, you don’t even get a vote.  Now go back to playing bass with Ted Nugent.

But this is the key point.  No one enjoys abortions.  No one sets out in life with a goal to go have some abortions.  Planned Parenthood isn’t recruiting people to stop by for an abortion, nor are they strong-arming women who come in for a pap smear into getting an abortion instead.

The only way to reduce abortion (which is a noble goal) is to reduce the need, not the means to get one.  That’s through education and birth control.

When they do get their way and prevent a woman from accessing abortion services, they need to have something in their hand beside condemnation to offer her.

And until anti-choice crusaders accept these facts, every claim they make regarding concern for women’s health, and children’s health, and the beauty of “choosing life,” rings as hollow as their souls.

Planned Parenthood provides valuable health services to women who need them.  3% of the time, that’s abortion.  The other 97% covers a myriad of health care needs.  They are hanging on by a thread, because of a bit of videotaped sleight of hand, created by people dedicated to shutting them down by any means necessary.

They need help, to continue providing health services to women with nowhere else to turn.

I’m writing them a check tonight.  You should too.
Posted by bluzdude at 8:39 PM

Beautiful entry Tony, extremely well written and clear. This should go to a national distribution so many can see and understand the situation. Good job.

BRAVO! Your Grandma is smiling down on your stand after being treated "like a criminal" for obtaining birth control material from the back door of the pharmacy. Nothing "new" about the anti Planned Parenthood gang. They have been working since 1916 when Margaret Sanger founded the organization.
Thank You for continuing the ongoing battle with a voice of compassion and sanity.

A billboard says "At twelve weeks from conception I could smile", but doesn't say " I also had gills and a tail". PP has done more for women in this country than can be imagined and this twisted hack job of an "interview" is the product of some seriously hateful people. Right wingnuts will believe what they are told and are not likely to change. Support of PP is the best way to fight back.

Thanks, Pop. Let me know if you run into any national publishers at ROMEO's.

Anything to make Grandma happy... Sounds like I come by it honestly.

That's the thing, Judie. These people don't really care what happens to the remaining tissue. It's just an emotional tool they can use to leverage shutting down the clinics.

Because tell me, what IS their preferred method of disposal? And why exactly does it matter? Clinics have been disposing of fetal remains across time and space, and frankly, it's not a subject anyone wants to think about. But they have to do something with it...

So what is the prescribed method? Toss it in a biohazard bin and incinerate it? Is that really better? My feeling is that the clinic could enclose the remains in a jeweled box, bury it in the park and plant a tree over it, and they would still find a reason to shutter Planned Parenthood.

I feel that if some good can come of a tragic situation involving the remains of what was never a sentient being, then all the better. But we're in a dispute with people who think two cells intersecting equals a person.

Yes, another misinformed piece of emotional manipulation. This billboard is implying that a series of involuntary contractions around the mouth is the same as recognizing happiness and reacting to it. Which does not take place at 12 weeks. I mean, how long does it take a baby to recognize stimulus and smile AFTER it's born?

Ask these people about research to alleviate or cure Parkinson's or Alzheimer's diseases, expect their hearty approval, ignorance of the source or material for such research.

Some wacko evangelical preacher said that a fetus can dream! What's that fetus going to dream about? The kid's meal at McDonald's, or maybe all that fluid he/she's floating around in? I am sooo sick of these people!

Because everyone knows that evangelical preachers have a deep background in pre-natal science...