Debunkery
I keep seeing these things on Facebook and other places, where (white) people are all, “This (white) guy just got killed and you didn’t see any demonstrations, did you?”

You know, it’s a basic bumper-sticker sentiment… it looks valid on the surface, but the logic behind it is completely askew.  The unspoken point is that we white folks are so much more civilized than those savages.

“Well of course you don’t see any demonstrations because white guys haven’t had over 200 years’ worth of systematic persecution.  White guys don’t get hassled, beaten or killed by police over minor infractions.  Sure, maybe it’s happened every once in a while, but it’s a rarity.

"White guys don’t have to worry about getting killed by police over selling single smokes, or having a tail light out, or not signaling a lane change, or just for not wanting to be somewhere near the police.  Oh, and I’m sure it’s just a coincidence that the police had to change their stories once the videos surfaced from each one of those incidents that had people protesting.

"So yeah, not throwing a protest when something tragic happens?  No extra credit.  We white guys have had it pretty good for a hell of a long time."

Baked Alaskan Debunkery
Just in case one of your right-wing friends or relatives goes on about how Obama’s sending our history down the tubes by renaming Mt. McKinley as Denali, be sure to mention this point.

The State of Alaska renamed the mountain in question back in 1975.  Only the federal government still refers to it as Mt. McKinley, due to the protest of Ohio congressmen (where President McKinley was born).  The bill renaming it to Denali was introduced by the Republican senator from Alaska, Lisa Murkowski, and is supported by Alaska’s governor and other senator.  But yeah, let’s blame Obama, y’know, cuz ’Murca.

Clerks Revisited
I feel bad for those poor gay couples in Kentucky, who still can’t get married because even after three separate court rulings, one court clerk still refuses to provide the licenses.  I had an article on this clerk bookmarked since last July, about how she “prayed and fasted” over her decision to withhold the licenses.

What I want to know is when was the last time someone “prayed over” an issue and then came back with a decision that went against what the person wanted to do all along.  Once they say they’ve prayed over it, you can expect the dogmatic answer 100% of the time.

Just once, I’d like to see someone say, “Well, I prayed and fasted over it, and it became clear that the Lord didn’t want me to swindle people out of their land and then make a fortune flipping it to developers.  So didn’t and now everyone can keep their homes.”

Trumpery
I’ve been reading a fascinating series of blog posts over the last couple weeks, from an unusual source.  Dilbert creator Scott Adams has an interesting take on the Trump candidacy and is going out on a limb to predict that he’ll win the election by a landslide.  It’s not that Adams is fond of Trump’s message… it’s all about the art of persuasion.

He claims Trump is a “Wizard” at verbal manipulation.  He’s not just evading questions, he’s substitution a negative image with a positive one, and attaching his name to the latter.  And people are eating it up.

While I still think Trump is an ego-inflated clown shoe, I understand Adams’ point.  People who listen passively are easily swayed by this verbal bait and switch.  And sadly, that covers a great swath of the American voting public.

The only way to defeat such a wizard is through active listening, coupled with a degree of common sense.

Like when Trump claims that the 14th amendment is unconstitutional and would overturn it if he becomes president?  Pure BS.  Aside from the assertion that part of the Constitution is unconstitutional, no president can remove an amendment.  It would take three-quarters of the 50 states (38 in total) to ratify a new amendment annulling the one in question.

When was the last time this country successfully ratified an amendment?  Hell, we couldn’t even ratify an amendment guaranteeing equality for 51% of our population.  No matter how hard these xenophobic wingnuts campaign, it’s just not going to happen.

But he’s out there selling it anyway, isn’t he?  And he knows that he can’t un-amend this amendment.  But he likes that image; doesn’t he?  “That Trump, he’ll get things done.”

It will be up to us to think through all his ridiculous campaign assertions, and everyone else’s, for that matter.

Sadly, I’m not optimistic.  But, speaking of giant turds, did you hear about the guy in China, in whom doctors found an 11-pound stool.  And I don’t mean this kind: 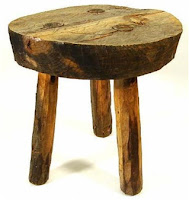 Dude was constipated for 10 years and complained of abdominal pains before doctors finally removed it.  And here I thought Chinese food was supposed to go right through you.  After it was done, I bet the guy felt loads lighter on his feet.  It was like finally coming up to bat after he’d spent 10 years in the on-deck circle, swinging the heavy bats.

Yeah, I know this was an indelicate thing to talk about, but you have to understand, my family and I love a good toilet story.  We can really talk some shit.

Like last week, when my brother sent me this text message.  He’s getting his bathroom remodeled and they just placed the key piece of equipment. 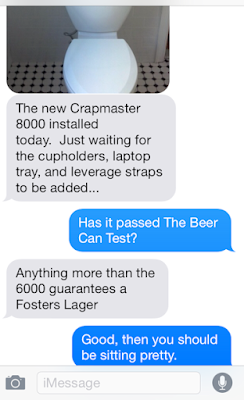 We’ve always joked that the perfect toilet should have enough power to dispatch a beer can.  Installing one that can handle an oil can-sized Foster’s is just showing off.

"I use emotion for the many and reserve reason for the few."
"The victor will never be asked if he told the truth."
"It is not the truth that matters but victory." Adolph Hitler
Scott Adams may be right. Similarities are chilling.

The Kentucky clerk is three times divorced, but then she found Jeezus. I suggest she get a job that doesn't conflict with her religion like parking meter attendant. Maybe then she won't be able to ticket cars with pro lgbt bumper stickers. She may have a hard time finding work.

No one person should be allowed to let her personal beliefs hijack her duty as a servant of the public. You can't/won't do the job? Out you go.

How soon can we get Trump in a bunker?

with Eva Braun or whatever "Piece of ass" he favors.

Impeach her, as the law allows. She has violated the Constitution and the Supreme Court ruling.