I know you’d think that I’d write about the big First Presidential Debate tonight, but for one, it’s tonight and I’m writing a post now.  I’d rather see it first before commenting.  The other thing is that I got to do something this weekend that I’ve always wanted to do.

No, I didn’t get to throw out another First Pitch.  I’m pretty sure I only get one of those per lifetime.  It was actually a much humbler goal.

Now, I’ve known I was going to the Orioles game on Saturday since before the season started. The Arizona Diamondbacks were coming to town and they were the last MLB team that I haven’t seen play in person.  Figures that they’d be here for the last home series of the year.

In addition, they were having a good giveaway that day: an Orioles hoodie.  But not wanting to take chances with unpredictable weather, I waited until last week to actually buy a ticket.  Found an “orphan” in the first row of the upper deck, looking down the 1st baseline.

Then on Thursday, Sitcom Kelly let me know she got her mom’s company seats for the Sunday game.  I hate to pass up a chance to sit in the Mom Seats, so I figured I’d do a back-to-back, to finish out the year.

But then I remembered that this was the perfect situation that I’d been looking for all year.  I’d been looking for an opportunity to see back-to-back weekend games and stay downtown at a hotel in between.  I never seemed to find the right set of circumstances throughout the year, and then BAM, it drops in out of the blue in the last series.

So I promptly booked myself a room at the Eyesore Hilton, right across the street from the ballpark.

Director’s DVD Commentary: That’s how I refer to this particular hotel because before they built it, there was a very nice view of downtown Baltimore, from the stadium.  Now the only thing the entire 1st base side of the stands can see is that damned hotel.

I figured it would be a nice change of pace from taking the subway home after the game (only to return the next morning).  Plus, I could use some of the credit card points I’ve been stockpiling, so it wouldn’t be much more of an expense than if I’d come home.

So I checked in around 4:00 on Saturday and got my room. 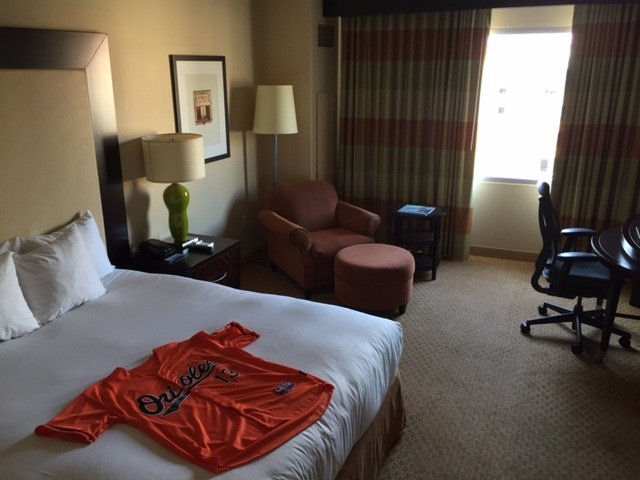 That orange jersey is one I bought new at the beginning of the year, but this was my first chance to wear it.  I usually match what the O’s wear and they only wear orange on Saturdays.  I’d only been to a couple Saturday games this year and they were in late July and August when it was too damned hot to wear a jersey.

In addition to just the room, I chose the option that provided a breakfast buffet for Sunday morning.  So I was surprised to see that they gave me a card for two breakfasts.  Damn, now I have an option for if I get lucky in the hotel bar after the game.

“Come with me, honey, and I’ll buy you breakfast…”

Yeah, right.  Instead, I texted Sitcom Kelly and asked if she wanted to meet me a little earlier, for breakfast.  She accepted, citing her love of free stuff.

Around 4:15, I headed over to my usual pre-game stop, The Bullpen.  On my way, I could see that the front entrance was jammed with people lining up early for the hoodie giveaway.  They wouldn’t even open the gates for another 45 minutes.

Was pretty bad over at the side entrance too, which was visible from my perch at The Bullpen.  So I had to choose between a giveaway hoodie and a couple hours of drinking cheap beer.  It wasn’t exactly “Sophie’s Choice.”

This was going to be the last times I’d see my regular bartenders until next spring, so before leaving (on Thursday, Saturday, and Sunday), I’d tell them as I paid my tab, “You know, everybody says this to military guys but no one ever says it to bartenders and I think they should, so let me just say, Thank you for your Service.”

The line outside the ballpark started to die down around six-ish, so dismounted my barstool and headed over.  Lo and behold, I got a hoodie after all.  There weren’t many left; they were working on the end of one box and had only one more box left.  So, SCORE! 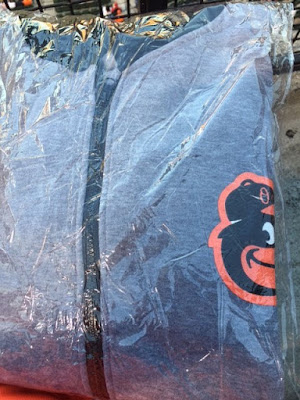 It got chilly by the end of the night, so the hoodie came in handy.

So yeah, I finally get to see Arizona play, and whaddya know?  You can hardly see them play.  Look at these uniforms: 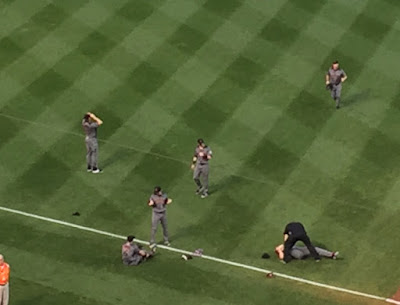 Not really liking the gray over gray.  They looked like they’re in their jammies.

I spent most of the night talking with a couple from Los Angeles, who were on a stadium tour.  Had been to Boston and Philly, and was going to The Burgh the next day.  It’s fun hearing outsiders’ opinions of the place, and I got to play ambassador.  Makes me feel somewhat useful.

After the game, I made for the bar at the Hilton, but it wasn’t the experience I’d hoped for.  There were plenty of people, but most were grouped up and talking among themselves.  The only way to break in would be just to dive right in and join the conversation, but that’s just not me.  Nor is paying 8 bucks for a 12-oz beer.

But I had a fallback plan: 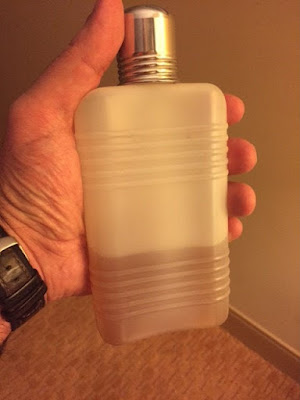 I brought my own hootch.

This is practically a family heirloom.  It’s one from a set of three flasks, which we used to use back in The Day, to sneak booze into Cleveland Stadium for the Steelers/Browns game.  One year I killed this whole flask full of brandy, by myself.  I don't remember much of the day after that.

Being older and wiser now, I just poured myself a nightcap and watched a little college football before bed.  Alone.  Sure had a lot of room, though!

Sunday morning, I met Sitcom Kelly downstairs for breakfast around 10.  It was a really nice buffet, which included an omelet station.  I love those! But we had to be careful; we couldn’t get too full for beer.

After breakfast, we eased back over to the Bullpen, to commence our final Cheap Ass Beer session of the season.  Sunday’s Orioles giveaway was an O’s flag hat.  This is one I’d have passed on, but they were for all fans in attendance; there was no escaping the ugly. 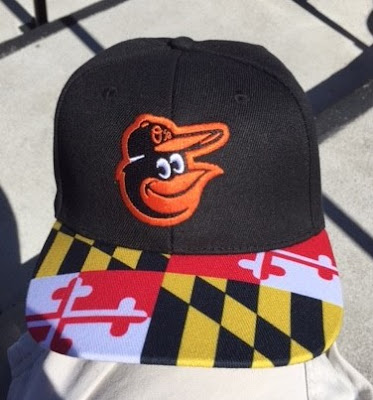 The Oriole Bird just doesn’t coexist peacefully with the schizophrenia of the Maryland Flag.

But the Mom Seats were great. 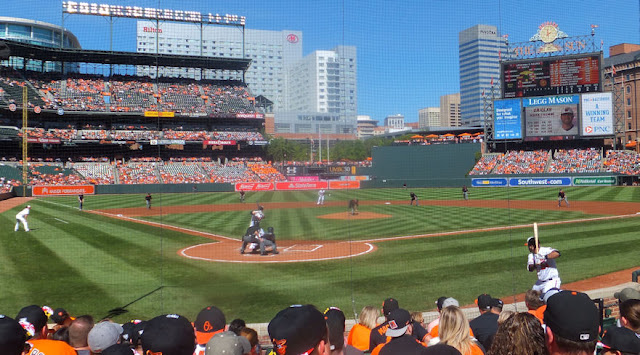 Featuring the Eyesore Hilton in centerfield.

It dawned on me that, once I took a couple of game pics, we’ve never sat there for a day game before.  The sunlight allowed me to get much better action pics. Like this” 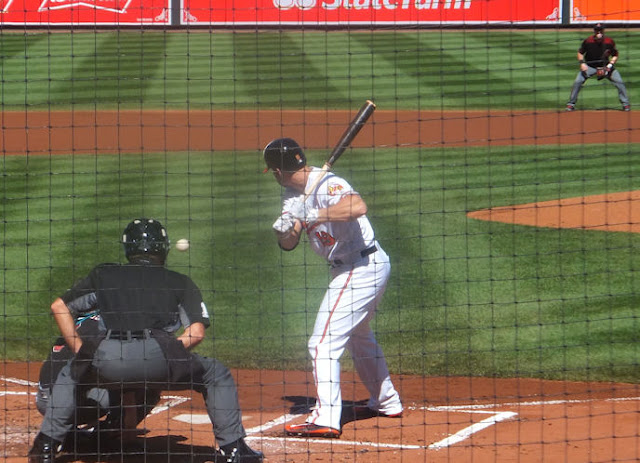 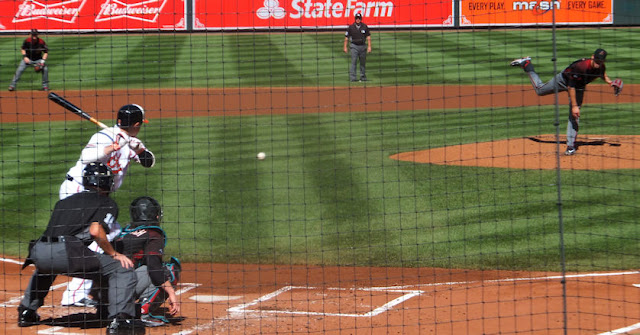 Usually the relatively low lighting gives the ball a tail, coming in.

The other thing I learned, this weekend, is that Arizona has some serious names on their ballplayers.  Saturday night, they substituted in a guy named Socrates Brito.  All I could think about was: 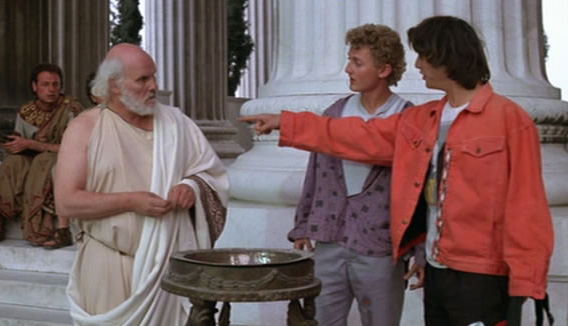 Director’s DVD Commentary:
“True knowledge is knowing that you know nothing.”

Then I looked at the rest of the first names: 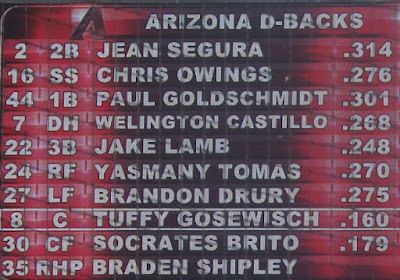 They got Welington, Yasmani, Socrates, and Tuffy.  Tuffy Gosewisch. Seriously.
The night before, they pitched a guy named Silvino.  Now that’s a diverse group of dudes.  Contrast that with the Orioles lineup: 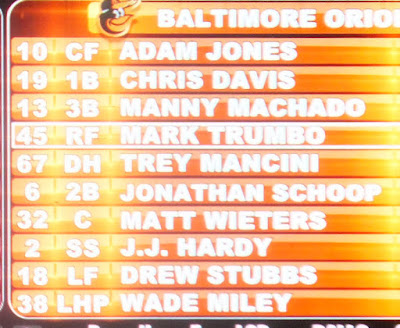 These names look like the whitest fraternity on campus.  (Although Manny could be the old guy who runs the deli.)

We only stayed through the 6th inning, because I wanted to get back to my other bar, to see the Steelers/Eagles game at 4:30.  Probably should have stayed at the baseball game, though, because the Steelers got their asses handed to them.

I’ll have to make a note of that for next year… no combining baseball and football!  But that wraps up my Orioles season.  I went to 26 games this year, which is a new personal record.  I saw all but three teams that came to town.  I missed the Rangers because I was in Ohio that week, the Indians because it was in the upper 90s that weekend, and the Yankees because, well, eff the Yankees.  (Although I did see them later in the season.)

Now I’m just going to have to settle for football.

But don’t worry about me.  I’ll survive.

Yeah, you'll survive, but the debate is another matter.

OK, NOW I can talk about the debate. For the most part, it sounded like mommy and daddy arguing over the dinner table, only daddy was an idiot.

You can see the rest of my "real-time" observations by scrolling my Twitter feed on the sidebar.

Great comments! Using Hannity as a reference had me on the floor laughing. As Bugs Bunny would say, "What a maroon!"

Hsnnity is the worst possible reference because he has no credibility on political issues. There's no way he contradicts the guy he's been shilling for all year.