In looking to make a dent in my vault of unused material, I uncovered a couple more conservative memes that, while a bit dated, still warrant a good debunking. The topics may change but the logical fallacies stay the same. 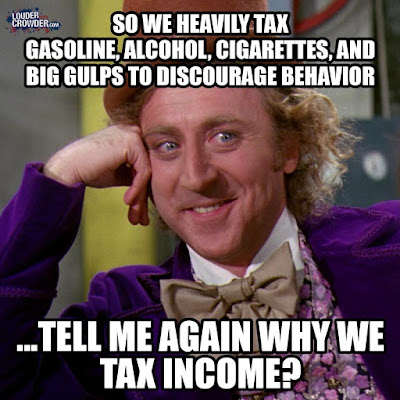 The oh-so sly inference is that taxes deter making a living, aka “income.”

Really? Taxes really prevent people from trying to make more money? Show me one example. Nobody stops trying to earn more money, they just find ways, ethical or otherwise, to avoid the taxes.

Taxes are simply necessary if we want a government that does anything. Anything. Like, defend our country. Build roads, put out fires, plow the snow. Explore medical cures for illnesses that afflict the population. Educate children and young people (or at least keep them under adult supervision while parents are working). Ensure food is safe and drugs don’t do more harm than good. Clean up after natural disasters. Uphold law and order, and investigate crimes.

This everything on this tiny, non-comprehensive list are things that are paid for with taxes, which have to come from somewhere, right? Hence the income tax.

Now, as far as these other levies, aka “sin taxes,” these are passed in lieu of raising income taxes, to which conservatives and wealthy political donors are adamantly opposed. They’re basically SOG taxes, meaning to good, God-fearing conservatives, they’re what Some Other Guy pays. If you buy the optional product, you pay the tax. But you stack enough of them up and eventually they come home to roost. The taxes come from you one way or another.

I’m not sure what point the creator of this meme is trying to reach, other than the pipe dream of no one ever having to pay taxes (and yet somehow live in a functioning country). Or maybe it’s just to create animosity towards the government, which conservatives want to be as small as possible. (Big enough to protect corporate interests, too small to help anyone else.) 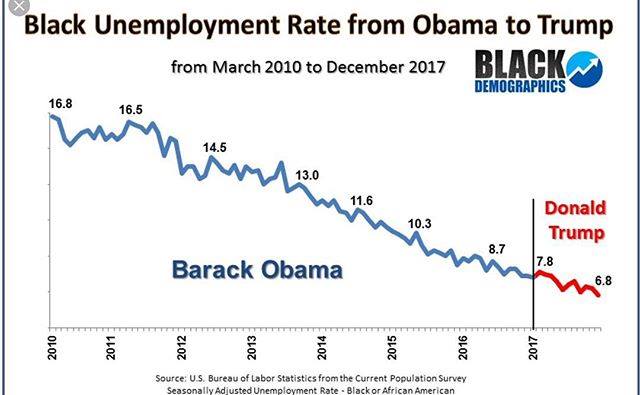 This chart is for when Republicans try to take credit for current economic gains, from any number of metrics. This particular chart shows the decrease in unemployment among black Americans, from 2010 to 2017. Yes, it has reached its lowest point under Donald Trump, but it has been heading that way all along. Today’s numbers are the logical extension of the numbers from the previous Administration. That means all he had to do was get out of the way.

Economies do not usually turn on a dime. The Trump Administration has done absolutely nothing to boost unemployment among minorities. The numbers were heading this way anyway. We should probably give him credit for not blocking it, but that’s about it. It’s not really something to base a campaign on. (Fortunately, the Republicans can continue to fall back on fear of foreigners, gays, and Muslims.)

This rationale also works with stats on the economy, like general unemployment, wage increases, the stock market, etc. There is a long, uphill run of increasing numbers, beginning when the Obama Administration reversed the Bush Recession. (Creating a momentum reversal in a graph line? That’s something for which credit (or blame) can be rationally assigned.) 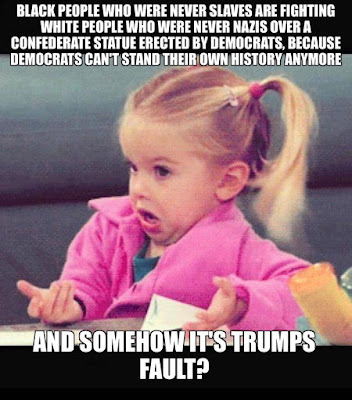 This is one I meant to debunk earlier this year. It’s wrong on just about every level.

“Black people who were never slaves…” but still live under the cloud of poverty and oppression that began with their ancestor’s slavery. Becoming free from slavery did not mean they suddenly had means to become affluent or powerful.

“are fighting white people who were never Nazis…” But continue to espouse the same beliefs as Nazis, making the difference non-existent.

“over a Confederate statue erected by Democrats…” Technically true, but omitting the part where Democrats turned their backs on their racist, Confederate pasts. Those who did not became Republican, which is where they are today.

“because Democrats can’t stand their own history anymore.” Republicans claiming the mantle of Lincoln are rejecting their own history; of that time they abandoned the Democratic party all across the south, in protest of the Civil Rights legislation of the 60s. They need to look in the mirror.

“And somehow that’s Trump’s fault?” Absolutely. He didn’t invent racism but he aggressively uses it. He fans the flames of hate and adds gasoline. He uses racist fervor to convince simple, fearful, not-terribly-well educated white people to vote Republican and then goes on about the very non-racist business of siphoning every possible dollar into the country’s ruling business class. 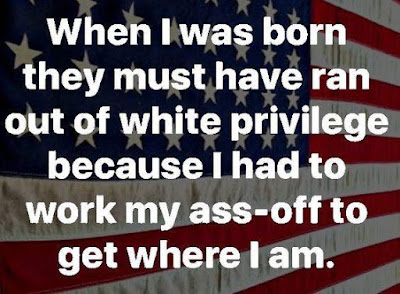 Another heavily-promoted myth that white privilege means white people have never had to work for anything. Simplistic bullshit, designed to play on white people’s sense of self-worth.

I know that as a white person, I most definitely worked my ass off to get where I am today. However, I also know that I didn’t have to deal with a boatload of things that, if the average white American had to handle, every fucking one of them would be in therapy.

I could go on indefinitely. In a nutshell, whitey may have had to swim across the lake, and it was hard work, but we didn’t have to do it with a cinderblock tied to our foot like others have.

White privilege gave us that advantage. The least we can do is stop whining about it. Or help extend that privilege to everyone. 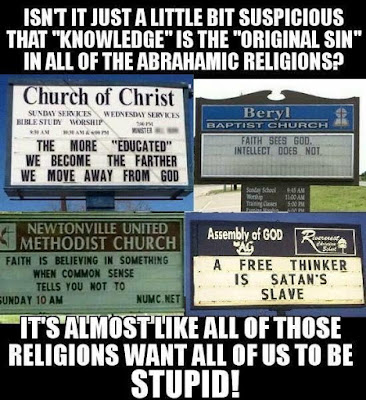 This doesn’t need debunking, because it’s balls-on true. Stupid is exactly how Republicans want the electorate. Convincing people to disbelieve what they see, hear and what can be PROVEN, in favor of a batch of authoritarian myths is integral to the Republicans’ methods. They frame scientists, experts, and highly-educated people to be feared… “Just leave things to God and a simple man’s elbow grease, and everything will be fine…” for the 1%.

Distrust of institutes of education and educated people in general is the first of three central tenets of modern Republicanism. People without critical thinking skills are more apt to fall for misdirection, logical fallacies and other propaganda, that look good on the surface and sound good when sitting around the bar. They’re pliable and easily persuaded to vote against their own financial self-interest.

The other two tenets are packing state and local government with their own people and filling the courts with those who will go along with their self-protection schemes like voter ID, gerrymandering, unlimited anonymous political donations, etc. Full post on my playbook hypothesis, from July.

Okay this is going to not make me friends. But religion is for the weak. Now not all, but for the most part to me religion is being told what to think what to do, how to be led. I know right from wrong, I do not need to be led anywhere. I do not need to be told how to behave or what I must do or how much money to send you. I know when Jesse Ventura made that comment he got such shit but I understood him. I have family like this. It's sad. No one should be led. Or you'll be wearing the nike's and drinking the kool aid right? You know right from wrong and good from evil one would hope and you will just do the right thing regardless of a religion. Heaven forbid you have an educated mind and healthy curiosity for more knowledge. With those you can't be republican or wholly connected 100% to any organized religion. If so you aren't really "obeyin" all their rules. I would be my life on that one. I see it daily. Whew. Thanks for that vent.

btw, why does it show this site as unsecured? Hmmm..

Unsecure? Maybe a little a little wobble in self-confidence from time to time, but I wouldn't call it unsecure.

You won't hear any push-back from me... I don't believe a word of it, and have a hard time understanding how other seemingly intelligent people get wrapped up in this stuff. If it makes people feel better about themselves and their mortality, more power to them. But I will fight to the end to prevent their religious dogma from being applied to anyone other than themselves.

That's basically my stance. Enjoy your religion but don't dare think you can apply it to me.

Religion has been adapted over the course of thousands of years to the task of keeping people submissive and controllable. It's a highly-evolved parasite which has developed the ability to manipulate its victims into defending it fanatically.

Considering the iron grip which religion has had on almost all human brains for dozens of generations, it's actually remarkable how many people have cast it off in the last few decades and how rapidly the number of non-religious people is growing.

The point about knowledge is a perceptive one. The mind parasite thrives in ignorance. Knowledge is poison to it.