Don’t look now, but the Republicans are having a second go at the Merrick Garland defense.

No, it doesn’t have anything to do with their stolen Supreme Court seat; it’s another naked, bold-faced power grab. This time they’re doing it in Wisconsin, Michigan and North Carolina, where the lame-duck Republican legislatures, in concert with the lame-duck Republican governors, are passing laws to change the state power structure and hamstring the incoming Democrat leaders.

They’re basically ignoring the will of the people, who swept the Dems back into power in a direct refutation of Republican leadership. Not only are they taking their ball and going home, they’re blowing up the ballfield behind them. 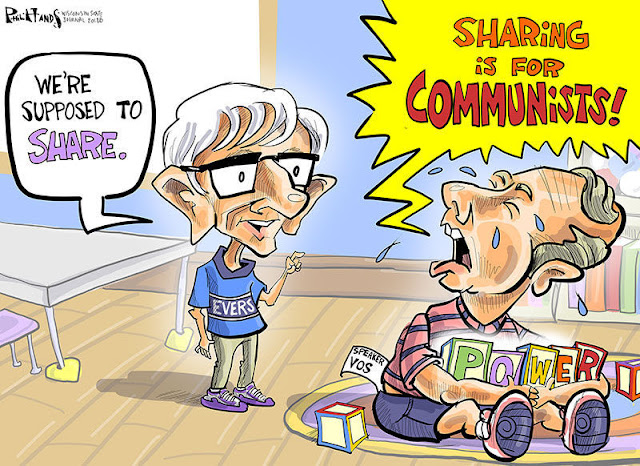 Wisconsin Governor, Scott Walker, is being lobbied extensively by the press and other politicians to veto the bills. As if there’s a chance that would happen. He was knee-deep in writing the damned bills. There’s zero percent chance he’s going to veto them because They. Have. No. Shame. The corporate money makes them immune to public sentiment.

Now that they’ve passed an egregious set of bills, designed to prop up the 1%, AND left them exceedingly difficult to remove, they can leave government office and be welcomed back into the private sector, where they will be rewarded for their obedience. They cannot be shamed on this. They’re basically flipping Wisconsinites the middle finger and dancing out the door. What do they care what the rest of the country thinks? 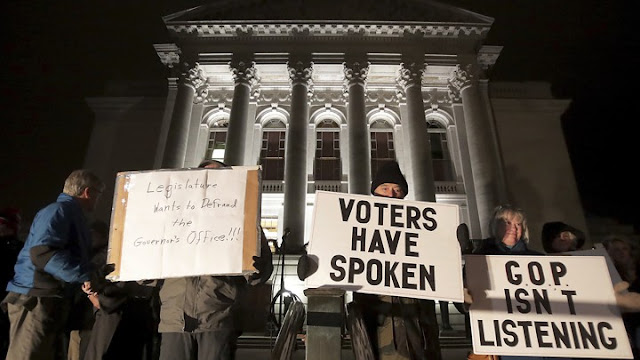 (Source)
This is essentially what they did with the Garland nomination. They staked out a power-grabbing position knowing full well that it would be massively unpopular and clung to it like a pit bull on a pork chop. They knew people would howl and protest, and they did not care. They knew the Koch brothers wanted a business-friendly court to protect their environment-destroying ways.

They’re doing exactly what their corporate donors/overlords want them to do. They know there will be two more years before the next elections and that the public will likely forget all about it… especially in the wake of all the distracting negative ads they’ll be able to afford, courtesy of those same rich donors.

I pointed out this strategy back in February of 2016. Now here they are, breaking it out again. This time, the New York Times is pointing out the corporate greed behind the denial of democracy.

As long as the GOP has big corporate money behind them, they can flout any convention they care to, knowing they’ll retain their power in the end. As far as Republicans are concerned, principles are only things their opponents are supposed to have. Only Democrats need to be “civil.”

Meanwhile, the last time Republicans lost power, the Tea Party was born. Because they only care about national debt when some other guys are doing the spending.

The GOP Playbook has been to:
·        De-emphasize, under-fund, and ridicule education, and in particular, the critical-thinking skills necessary to see through their own campaign of misinformation and misdirection.
·        Pack state and local governments with their people, who can then influence political ground rules (and the item above.)
·        Get GOP nominees onto court benches all up and down the line, but especially in the Supreme Court. That protects their self-serving, big-business-slanted laws, from tax code to environmental code.

The only way to change any of this is to beat them at their own game.

Democrats must win back government offices from the ground, up. It’s not enough to win the US House or Senate, or even governorships. We have to win town halls, city halls, mayorships, zoning boards, boards of education, state legislatures, all of it. Only then can Democrats change the laws (and district boundaries) that cement Republicans into positions of power, which far outpaces the numbers that put them there.

We have to teach young people how to think logically and how to recognize a BS argument. Hell, Facebook memes alone can provide enough material for a full semester’s work. People need to know how to think, not just toss back memorized factoids on command.

And we must pull out all stops to regain the majority in the Supreme Court. This will be the hardest nut to crack because the age factor clearly works for the Republicans and against the Democrats. It has to be a long-term plan. And the other state and federal judgeships are important too. They decide the cases before they go to the Supreme Court. It’s more advantageous to have lower level court decisions in your favor than to be the one asking for an overturn.

This isn’t something we can solve in one or two election cycles. This is a quest that must be maintained over the long term or else the big money will prevail.

The thing that’s in our favor is that there are more Democrats than Republicans. And there are a hell of a lot fewer rich people than non-rich people. If we can get the non-rich to overcome the way many have been “programmed” and vote in their own financial interest, we might become again, a country of which we can be proud.

It's only going to get worse I fear. I so wish I could afford to leave the country.

Maybe a law could be written later that retroactively makes the penalty for doing these things exile.

I still have a degree of optimism that says we can make our case to the American people and eventually, most will agree with us.

I have to, or else everything else we do is pointless. I'm not ready to be pointless yet.

Exile to a garbage heap, maybe. Or one of those "shithole countries."