You may have seen from my last post that my father passed away last week after suffering a stroke. If you saw that, you'll know how angry I was and remain at the COVIDiots here on the Panhandle, whose selfishness and self-delusion caused my Dad to spend his last conscious days in the company of strangers and not his family.

As of this writing, I'm down in Florida tending to my mother. We're trying to tidy things up here so she can come back to Baltimore with me at the end of the week. There is no scenario where she can remain in their Florida house by herself.

As such, I'm not really equipped to whip up a post on national current events today. But some of you have asked to hear more about my dad, who was truly a character. I plan to rerun some favorite stories, but probably on off-schedule days and not until I get resettled back home.

Today, I thought I'd show you the notification I put up on Facebook last week, informing our friends and family of his passing. It was a bit of a tightrope to write... I didn't want it to read like an IBM quarterly statement but also didn't want to go full-on clown-shoes.

Jim's family regrets having to tell you today that he passed away this morning, (9/7/21) several days after suffering a severe stroke. It was sudden, surprising, and devastating. We are all heartbroken at his passing, which was far too soon.
He will be remembered as generous, open-armed, and quick to dispense wise advice over drinks, whether it was how to invest your money or respond to a prank. He had a range of friends spanning his 80+ years, from his own school days to the school friends of his children, many of whom considered him a backup, auxiliary dad.
He was the patriarch of a broad family who enjoyed his visits to Pittsburgh or visiting his Florida home to float in the pool and receive his peerless cabana services.
He will be remembered as a man of simple pleasures, like a stadium seat, a fish sandwich, or a cold drink on a hot day. His passion for Pittsburgh sports was passed on to not only his kids, but to others who seemed to have picked up a Terrible Towel out of sheer osmosis.
Jim and Mary Ann together condoned and chaperoned “The Barn,” where a great many 80s kids in NW Ohio came to party and dance or just listen to music, rather than going out driving around and getting into trouble. Many of us had our first encounters with Mr. Jack Daniels, under his close supervision.
Later tonight, if you can, please pour a drink and raise a toast to our father, grandfather, father-in-law, uncle, cousin, and old or new friend, Jim, and let him know he’ll be in our hearts forever. 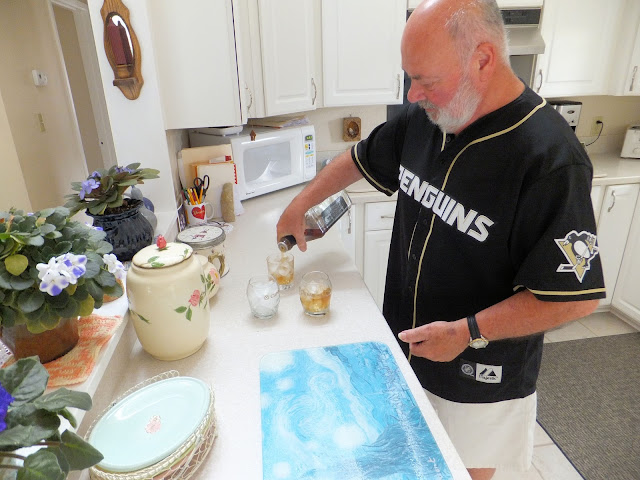 Safe travels as you care for your mom and return to Baltimore. You’ll be in my thoughts.

That was a beautiful Tribute to your Dad. I don't envy you the task of moving your Mom and relocating her, we had to do that with our Mom, may it go smoothly for you and Travel be Safe for you as you return Home with her. Florida right now is such a hotspot, with Deathsantis in charge, that she'll probably be much safer in Baltimore.

Thanks Deb. We appreciate it.

Vax rate is high in Maryland and the Baltimore area in particular. Everywhere I go in my neighborhood, people are masked in stores... almost all. Here? I've seen a couple.

I apologize for being so late in getting over here, but there were some things going on over at my place. You already know that I send heartfelt wishes and condolences to your dear dad, and I know right now things are so tough. I'm glad you're bringing your mom back to be with you and Sweet Pea so she'll feel a lot more comfort. I'm also glad that you'll be sharing stories of your dad so we can all smile a little. Sending lots and lots of hugs, RO

OMG,I've been thinking of you lately. Dear Tony,I'm so sorry for the sudden loss of your Dearest Father. Losing a family member is hard a swallowing turpentine..that's the way I describe it,as I lost both my parent's while young...no warning.
He loved well,always did his best and forever is alive in the hearts of all he loved. I am so sorry for you and your dear families great,great loss.
Much love to you and yours.