Holy Crap!  It’s almost Christmas!  Where does the time go?  (My thought is that it’s still in line at the Post Office.)  I haven’t even written a thing about Christmas this year.
Last year at Christmas, I was just getting used to the idea that people aside from my mom and dad actually read this blog.  So not to lose these new inquisitive eyes, I brought out every decent Christmas story and recollection I had.
First there were the tales of my childhood Christmases; some were sweet, some were literally quite smashing.  There are also pictures posted of my little Christmas tree that I have right here… no need for more pictures than what’s there… this year it’s the same ornaments on the same tree in the same place.
I wrote about Christmas home movies and our annual pilgrimage to Pittsburgh every December here.  There’s nothing like seeing the same home movie over and over again, where the kids age like it’s a stop-motion photography project and progress from one horrible 60s or 70s clothing style to another.
I vented my spleen about how much I hate the traditional treatments of Christmas music and what I listen to instead, here.  There’s also a mini-rant about the over use of that stupid Nutcracker riff, how it’s in every freakin’ commercial from Thanksgiving on.  At least this year, Hyundai has those new commercials where that guy and girl sing Jingle Bells and Up on the Rooftop.  It’s not that I like the songs; it’s that the girl is reeeeeeally cute. 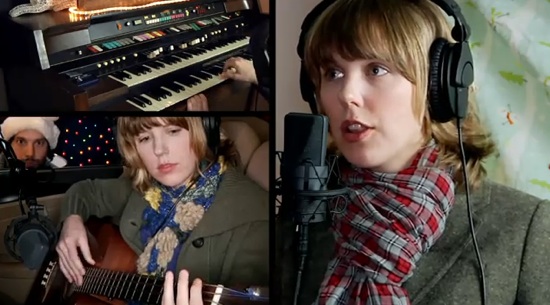 They’re actually a real music group called “Pomplamoose.”
I addressed the issue of what to tell your kids about Santa Claus.  I’ve seen a lot about the subject on blogs just this week.  (Miley, I’m looking at you.)  I acknowledge that I don’t have kids, but I used to be one, so I describe my experience from that angle, and also from when I was a stepparent for a couple years.
“Hey kid… c’mere… Santa doesn’t exist and your mother doesn’t love you…”
I know… Stepfather of the Year, I was.
Anyway, my point is that I don’t really have anything new to cover for this Christmas season.  But unless you were one of the half-dozen or so that was reading me last year, it’ll all be new to you, so just pretend it’s a post of fresh Christmas goodness from your old pal bluz.
In the meantime, my dad sent me this video that reminds me a lot of our Christmases.
The familiarity comes more from the lyrics than the visuals.  We weren’t the “Jersey Shore-style of Italians like you see in the video.  No one ever sat around the dinner table in their white undershirts, at least not in December.  Undershirts were for the front porch in July with a Pirates game on the radio and a cold Rolling Rock in hand.
Enjoy!
Posted by bluzdude at 7:25 PM

Unfortunately with a predicted high of 75 in Louisiana on Christmas, being married into a large Italian family and plans to make spagetti and meatballs for Christmas lunch, our Christmas may very much resemble that video.

I find the girl in that band strangely attractive in that she needs a bath and a new hair do kind of way.

Jessica,
They have Italians in Louisiana? I guess it makes sense... they don't have to bury the fig tree if they live there.

Trash,
I think she has an irresistible girl-next-door quality. Love the bangs. The dude, however, reminds me of a monkey.

Baby girl... you can do better!

Bluz, I agree. She should email me stat. lol

'The Holiday Hogs won't bug me this year/They give me a royal pain in my rear./No need to visit in-laws this year./They barge into the bathroom./They never learned to knock./Of course they say excuse me/but the whole thing is a crock./They whine and carp and criticize./Nobody is immune./The praise they give to anyone wouldn't fll a quarter spoon./The Holiday Hogs will take up your time./They'll gobble ypur soul and mess up your mind./No need to visit inlaws this year.'

There IS a Santa and Mommy does love you.

This year I just can't seem to get enough Christmas; I like the overplayed songs (most of them, anyway), the lights, Santa, the eating (especially the eating), the stories, kind of even the shopping. So it was great to read your stuff from last year since it was all new to me!

But wait, no game mojo? Or did I miss some explanation in this or another post (I get distracted easily).

Facie,
Thanks for going to the trouble of actually checking out the old stories. I'm going to have to do something noteworthy this Christmas, so I have something to write about next year.

Last Sunday's game mojo was covered briefly in a Twitter pic, which you can see on the right sidebar. Basically, I wore what worked the previous week, because it was another Steelers home game that I watched from home.

Didn't work out quite so well this time. I'm going to have to go with something completely different this week, because of the Thursday game.

Oh goodness yes. They're everywhere! This particular group came in through the Port O' New Orleans.

Our Italian get together is very much like that video. However, we dress appropriately. For reals. Not to mention, half the people there are 100% Polish, the other half is 100% Italian. Makes for some stubbornness, loud voices and lots and LOTS of alcohol.

I love the Pomplamoose Hyundai ad. I feel like I shouldn't, but for some reason, I don't care.

Maybe the girl does it for me, too.

Holy Crap! Four days to go and I still have gifts to buy.

What do you get a 19 year old college boy who's still about 15 when it comes to dating/social relationships? He's just discovered dating and recently called and asked how to cook rice. He was making dinner for a gal. Problem is she was sitting there at the time. (He's got a long way to go, but it's a start.)

No, really. You said you used to be a kid, so I'm asking you. What should I get him?

Hahaha! Great post, Bluz! But now you have to go back to Cher's blog, 'cause you're up again!!

I envy your Italian family, Bluz. Lots of extended family all around, no matter what they say or how their hair looks---it's love. I had so little family that I made my own. Now there are lots of kids, grandkids and significant others. And...I do talk wit my hand, ya know!

And guess what? For making me LMAO, you are up again! Between you and Judie, this is getting to be a hoot! Thanks to both of you. :)

Jessica,
Yeah, they probably looked around NY and NJ and said, “Screw this, take me somewhere warm!”

Cassie,
One of my favorite Christmas memories ever was the Feast of the Seven Fishes they mention in the video. Best meal of the year, every year. Grandma and the Aunts would make enough food to serve an army and it was just amazing.

Best thing about the Polish and Italians getting together is that everyone knows how to polka. (Well, except me.)

Mrs. Bachelor Girl,
The thing is, the music bugs me. I hate the double-tracked vocals. But the girl is so cute, I just have to overlook it. Sometimes one of the songs gets stuck in my head at night and drives me crazy when I’m trying to sleep. That’s when I have to force some AC/DC or Scorpions in there to take over.

Kernut,
The easy answer is a cookbook written for young guys just starting out… (I don’t know of any in particular, I’m just spitballing here…) Guys need to know how to cook for themselves, both simple dinners for one, or a nicer dinner for two.

Failing that, I know when I first moved out, my mom gave me a number of hand-written recipe cards with directions on how to make my favorite dishes that she made… Chili, pasta and sauce, chocolate cake… Later, I went back to her seeking the timing and temperatures for fish, chicken and pork. It proved to be a good starting point.

I’m 49, and I still have those recipe cards.

Cher and Judie,
Surely there must be someone besides us to keep it going? I intended mine as a one-shot deal...

And just so you know, the only reason I even "went there" was the bloody earrings that Judie left behind. I was going to go in an entire different direction!

If anyone else is wondering what we're talking about, go to AskCherlock.com. Cher is running an interactive story, to be continued in Comments. They totally baited me into it and now I'm trapped! Go see!

Bluz, not to worry. We will free you---after we put you under some spotlights and question you about your family's secret recipes. Don't be afraid...

You just had to bring Jimmy into it, didn't you, Bluz! Well, I took it one step further. If it's the Southland you want, you got it!!

Just wanted to stop by and wish you a very Merry Christmas!

Thank you for the advice! I got him a crockpot cookbook, complete with pictures and simple, one-page recipes. (BTW - He's not my son, but my step-brother.)

Judie,
Well played, Miss Scarlet. That was fun.
Funny thing was that I wrote that second piece last night after coming home from happy hour. This morning, I knew I wrote something but had no idea what it was about. I had to check in this morning, to remind myself.

Such is the peril of drunk-blogging.

Raven,
Merry Christmas to you too! I hope you and the drunken midgets have a happy, peaceful holiday.

Kernut,
Glad I could help. “Mangia!”