That Year of Journalism Classes Did Not Go To Waste

As you've probably been able to tell, I don’t let anything amusing that I write elsewhere go to waste and usually run it here.  Today is no exception.

I was emailing with Sitcom Kelly.  (And how many of my posts start out like that?)  In my last post, I wrote a compare and contrast piece between Pittsburgh’s PNC Park and Baltimore’s Camden Yards.  Sitcom Kelly was at a game with me last weekend and we had discussed some of the items during the game.

Director’s DVD Commentary: If you haven’t been reading me long, Sitcom Kelly is a friend of mine whose goal it is to dig a Silence of the Lambs pit in her basement, with the intent to capture and keep Pittsburgh Penguins defenseman Kris Letang.  It has also been established that her next target would be her girlhood crush, former Steelers kicker Matt Bahr.  Lastly, she plans to construct a 6’ tall glass case for the purpose of displaying Penguins forward Sidney Crosby in her living room.  (Although some of her other ‘guests’ may rotate through turns in the case.)  She plans on maintaining her guests’ good will by plying them with really good ziti until they fall in love with her.

We've been working on a document to collect jokes and ideas for the sitcom we plan to produce about her life, hence, the name Sitcom Kelly.

After I wrote the piece, I solicited a comment from the Carpetbagger, knowing that he sees a mess of Pirates games and I wanted his opinion on the matter.  The old Carpetbagger came through for me, so when the notification email popped up, I forwarded it to Sitcom Kelly to have a look.  One of the Bagger’s points was about how they always play the same music.

SK: I wonder if they still play “We Are Family,” by the Pointer Sisters, at PNC Park?

(This was the theme song of the 1979 World Series Champion Pittsburgh Pirates, although it was done by Sister Sledge, not the Pointer Sisters.  I kept the latter point to myself.  But during the playoffs, the players wives could be seen dancing on the dugout roofs when the song played.) 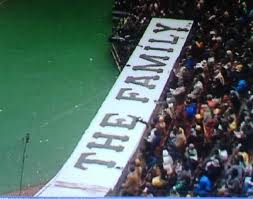 Bluz: They should play it after the game, like the Yankees do with New York  New York… but only after a win.

SK: If I go to the game in August, I’m going to request it.

Bluz: Headline: 1979 Returns
Pittsburgh (AP)
A Johnstown woman was arrested at PNC Park, this afternoon, for dancing on the Pirates’ dugout.

Multiple witnesses say that “Sitcom” Kelly charged her way onto the top of the Pirates’ dugout roof and began demanding that they play the disco song “We Are Family.”  When the song was not played as requested, she began singing loudly and performing what some observers might consider a “dance.”  When the inning change was over and the game was to restart, she refused to return to her seat.  After numerous complaints of indecency and aural assault from those in the front rows, PNC Park Security forcibly removed her.

As she was tased and dragged away, she was heard asking Pirates’ outfielder Garrett Jones for his address and phone number.  She also reportedly made references to a ‘pit’ of some kind, which are not fit for a family newspaper.  Authorities were summoned to investigate.

SK: The possibilities are endless.

Bluz: (continuing…)
When they investigated Ms. Kelly’s house, authorities found numerous relics of the seventies (8-Track tapes, picture slides, Pet Rocks, etc.), a dozen cats, assorted empty bottles of wine; but while there was one doorway that was nailed shut, there was no evidence of a ‘pit.’  They did, however, find a 6’ glass display case but were unable to determine its purpose.  Detectives say there were a number of finger prints inside the case, as well as a message smeared on the glass that read, “More ziti, please!”  The investigation is ongoing.

Bluz: Why not?  What’s one more manuscript we’ll never do anything with?

Oh, look at the shiny thing…
Posted by bluzdude at 8:20 PM