On various sites throughout the Internet, January 14 has been proclaimed “DeLurker Day.”  This is a day designed to coax those people that regularly visit a blog without ever commenting, to come forth and join the group by leaving a comment. 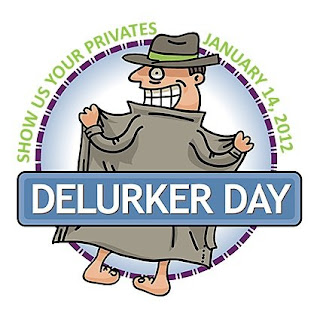 I’ve been itching for this day to come around.  I missed it last year, which severely pissed me off.  As you probably know, I track my blog stats and visitors with the intensity of a dog staring at a bowl of pork chops.  (Or, me, staring at a bowl of pork chops.)
In using my StatCounter service, I can see people turning up several times a week, if not daily.  I’m always so curious about who they are and how they came to find this site.  I wonder if they return because they enjoy it, or if they just want to see what that idiot is going to say next.  Is it an old friend or enemy, checking in to see what’s become of me?
I want to know who is checking in from Anchorage, Alaska and Dallas, Texas.  Who is coming from PPG Industries, Pittsburgh and the University of Pittsburgh?  Who arrives from Salineville, Ohio via Cassie’s site, or who checks in daily via Uncle Crappy?
This is not to say I’m complaining about the visits.  I’m always glad for the attention.  I merely say to you, my regular silent guest, that if you have come this far, why not come just a bit further and participate?  And why not give everyone else the opportunity to check your blog, if you have one?  As you should know, all are welcome here.
Well, all that aren’t assholes, anyway.  That’s my job.
Now, I’m thinking of trying out a new short-form feature, where I talk about issues that have surfaced, and give a brief opinion because I don’t have enough material on it to flesh it out for even an Odd Bits bit.  I call it:
Hey Bluz, What do you Think About…
…Lindsey Lohan posing in Playboy?
I’m kind of “meh” about the whole thing.  She was made up as Marilyn Monroe the whole time.  What’s the point of celebrities posing naked if they look like someone else?
Note to Lindsey: Marilyn did it better.  Now go back to your public service stint.
Note to you: If you click the link and check the pictures, please know that only a couple of these shots were actually in the magazine and the ran many that aren’t shown here at all.
...the charges that the show “2 Broke Girls” is racist?
At a press conference with the show’s stars and show runner, reporters made repeated charges that the characterizations of the Asian diner owner, the old black cashier and Russian cook were racist.  I never really sensed racism in these depictions, I just laughed a lot.  However I’m a mild-mannered Italian heathen.  Maybe if they had one of those on the show, I’d be more offended.
I think they’re getting a bad rap.  What half-hour sitcoms drop fully developed and nuanced side characters into the first season?  Give them some time, for cryin’ out loud.
…the new show “Work It?”
“Work It” is a show about guys dressing as girls to get a job… or in other words, “Bosom Buddies” with an office instead of a school dorm.  From the promos alone, I thought it looked like a horrible show.  It’s been pretty much savaged by every critic in America as the worst show ever.
Sitcom Kelly likes it though.  I can only assume she’s growing tired of putting dresses on the athletes she keeps in her basement Silence of the Lambs pit, and craves some variety.
...those Marines peeing on Taliban corpses?
I’m of mixed mind on this.  While I wish they handled themselves with more decorum, I can certainly understand what may have driven them to such lengths.  On one hand, fuck the Taliban.  I make room for the notion that if I had been fighting these guys for months, had watched them shoot or blow up my buddies, had them shoot at me, watched what they’ve done with those that they’ve captured, I’d be sorely tempted to express my feelings in a similar vein.
However, I would NOT have put a film of it on the fucking Internet!  Now, we have an international incident with severe repercussions, just because someone wanted to impress other soldiers or his buddies back home?  Good God, if you must record this sort of thing for posterity, keep that of shit in the fucking camera.  Who knows how much of the success to which these guys contributed, just got rolled back into oblivion?
...Mitt Romney saying he likes to fire people?
When the Republicans take a line out of context and them blow it up and repeat it all over the media, I’m glad that this time they’re doing it to one of their own.  Yes, I know the so-called “Liberal Media” ran with it too, but right out of the gate it was blown up and batted around by the other Republican presidential candidates.
While I think Mitt’s phrasing was clunky and a bit tone-deaf, I don’t think he was wrong.  We all should have the option of being able to “fire” those institutions that are providing us with substandard service.             Whether or not Mitt was callous or cavalier in the firing of employees working for the companies that his Bain group acquired is a different conversation, which has no bearing on this particular story.
…the employee evaluation you got yesterday?
It was just fine, but I had to laugh.  My boss included the following statement on my evaluation form: “Enjoys a good debate.”
I laughed out loud and said, “I know what you really wanted to say was, ‘Argumentative asshole.’”
She denied that, but I declined to argue about it.  That wasn’t an argument I needed to win.
Posted by bluzdude at 1:22 PM