I apologize ahead of time for this post being kind of a mishmash.  Sometimes, that’s how it goes, in my head.
First order of business: I still consider it DeLurker Day and I will until someone actually DeLurks!  So far I haven’t had anyone comment who hasn’t commented before.  And even more disappointing, I’ve had visits from all five people that I called out in the post, and they still haven’t commented. 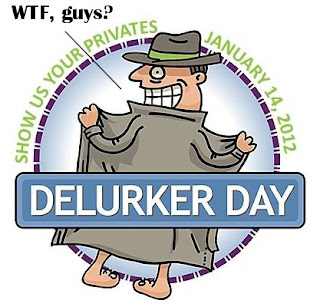 Come on… someone has to go first!
In other news, I have a guest post up at AskCherlock.  I think it’s kind of like when you turn to your last-resort babysitter: all the good ones are busy but you still need to get out of the house, so you turn to your ne’er-do-well brother-in-law and hope he doesn’t destroy the place.
Cher asked me to do a political post, so I was happy to oblige.  That’s like handing matches and kerosene to a 12-year old boy in a tree house… something’s getting burned down.  I definitely brought the pain.
In fact, I plan on cherry-picking the good parts to flesh out here, as we roll toward the November elections.  But to see it all presented in coherent (if elongated) form, click here to check it out.  If I send enough traffic, they might ask me back to defile their site again next year.  And now, onto…
Hey Bluz, what do you think about…
…Martin Luther King Day?
Monday morning when I woke up and heard the traffic report, I remembered it was MLK Day.
When I left for the subway station and there were no cars on the road, I remembered it was MLK Day.
When I got to the subway station and there were hardly any cars in the lot or people on the train, I remembered it was MLK Day.
When I walked to work and downtown was a ghost-town, I remembered it was MLK Day.
But when I ventured out into the freezing cold to mail Judie’s tee shirt at the post office, I forgot it was MLK Day.
Shit.
…that cruise ship overturning in the Mediterranean?
Where’s Shelly Winters when you need her? 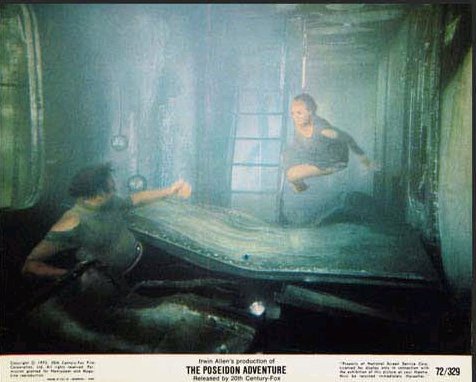 The Poseidon Adventure Part 3 – Head Over Keels in the Med
…the final four Super Bowl contenders?
I don’t like this at all.
The first order of my rooting business is that the Ratbirds can’t win, so I’m forced to root for the Patriots.  I had been counting on rooting for the Packers or Saints to go on to beat the Pats in the Super Bowl, but they both lost last weekend.
So I’m left with San Francisco, who I can’t root for to win because it would give them six Super Bowl wins, which would tie the Steelers.  That makes rooting for the Giants as my last alternative.  I don’t feel strongly about the Giants either way.  I suppose I can take solace in the fact that their owners, the Maras, are old friends of the Steelers’ owners, the Rooneys.
All in all, I’m calling it Super Bowl ‘Meh.’  Maybe the commercials will be worthwhile.
…the new poll that shows Romney running in a dead heat with Obama?
It’s largely irrelevant.  Republicans, for better or worse, have been all over the news and when not criticizing each other, are going after the President.  Obama has been largely unheard from.  No ads, no big speeches, no appearances on the talking head shows, nada.  But behind the scenes, the troops are massing and the money is being collected.
Show me the polls when both sides are running in earnest and then I’ll pretend it matters.
…of that video Jessica mentioned in the last post?
Jessica left this in Comments of my Why Heathens Make Good Friends post and I just had to pass it on.  Hilarious.
Of course, this has nothing to do with MY religious upbringing.  We never went to a church that was even close to being this slick, but I know it’s part of the Mega-Church trend now.  This piece takes it down a notch or two, stylish glasses and all.
Posted by bluzdude at 6:32 PM