He Ain't Heavy, He's My Brother

I reference my Grandpa on my mother’s side a lot.  He’s the one that was the Storyteller, although his siblings were no slouch at spinning a yarn either.  The fact that the whole family was nuts certainly proved to be fertile ground for good stories.

Back in the early 1900s, it was common for Italian families to have some of the kids continue to live at home, even after they got married.  My mom’s uncles Ants and Meek were no exception.  (Ants was short for Antony and Meek was short for Amilcare.  The latter came from when his mother would call him in for dinner, “AMEEEEEEEEEEEK-A-REE!”  All his friends could hear was the MEEEEEEK part, so it stuck.) 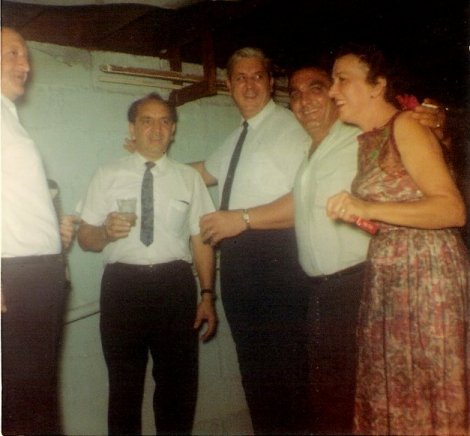 L to R: Uncle Meek, my Grandpa, Uncle Ants, Guy I Don’t Know, and my Grandma, at my grandparents’ 35th anniversary party, circa 1966.  Yes, they wore ties even for parties held in the basement.  Grandpa wasn’t particularly tall but you can see how big the Uncles are.  It’s from them that I get my size.

As the oldest, my Grandpa was generally more responsible, but the brothers were real rascals who liked to drink and tussle and carry on.  Meek was a Pittsburgh cop, one of the last to walk a beat in the city, without a gun.  Nobody messed with him or they were likely to see the business end of his nightstick.  In fact, no one messed with my little 5-foot nuthin’ mom, either, when she’d walk through town on the way to and from work, because they knew they would stay healthier that way.  Officer Meek didn’t play.

Sometimes, Meek would have to referee the fights between his own parents.  He’d come home from a long day on patrol and they would both run to him, each shouting their own version of the day’s quarrel over top of the other, in Italian of course.  One night it got so bothersome that he took out his handcuffs and cuffed them together.  He told them he’d unlock them when they worked it out, then he went upstairs to have dinner with his wife and daughter.  They worked it out by the time dinner was over.  I suppose it was just a matter of motivation.  Moms says she thinks they secretly liked each other… I mean…  they had 13 kids after all.  But I’m not so sure.

Back when my Grandpa was a boy, shortly after they’d immigrated to the US, his mother yearned to return to Italy for a visit.  His dad, Guiseppe, agreed and paid for a ship to take his wife and my grandpa back to the Old Country.  But shortly after she got there, she changed her mind and wanted to come back home.  Through friends and relatives, she got her request back to her husband.  He send word that it would take a while before he could earn her return passage.  But that wasn’t exactly true.  He figured, she wanted to go to Italy, he sent her to Italy.  So she’d better stay there for a while, to make the trip worth the money.

Of course, his ulterior motive was that he got be a Man About Town, loaf with his friends at the firehouse and generally be free from family obligations for a while.  OK, it was more than “a while.”  He left her there for more than a year.

Meanwhile, my Great Grandmother, pissed off to beat the band, earned her own boat-fare back by various means, including stealing eggs.

Then one afternoon, Grandpa Guiseppe was having coffee on his neighbor’s porch when he spotted his wife striding up the sidewalk, with his son in tow.

Startled, he exclaimed (in Italian), “Ai!  The Devil has returned!”

I bet not even a grown up Uncle Meek, nightstick and all, could have calmed the storm that night.

She got even with her husband in other ways.  He had a natural way with musical instruments and could play almost anything.  He’d go from banjo to flute to bass violin…  Then one day he hit on the kazoo.  Great Grandma did NOT like that one bit.

She said, “Come Ant-no-ee, help me before he get home.”

That night when his dad came home and picked up the kazoo, all he could produce was a big PFFFFFT PFFFFFFT POOOOT.  He snapped the kazoo over his knee and tossed it out the window.  Problem solved for both parties.

But anyway, this is the story I really wanted to tell.  (Those others just kind of jumped out.)

One night Ants came stumbling into the house after a long night at the bar.  He tripped over something coming in the door and knew it was his brother Meek, drunk and passed out on the floor.  Being a good brother, he decided to take him upstairs and put him to bed.  As he picked Meek up, he began talking to him…

“Fer Chrissakes, what are you doing on the floor, Meek?  What, you can’t even make it up the stairs?  How much did you have to drink?”

Grunting and sweating, he dragged him up the stairs.

“Goddamn, you’re heavy.  You putting on weight?  What’s with the beard, Meek?  Didn’t you shave this morning?  You can’t go around looking like a bum… you gotta take a shave in the morning.”

As he wrestled his load to the top of the stairs, he saw someone standing in the hallway, laughing.  It was Meek.  Only then did he realize that he had not, in fact, been carrying his brother, but a rolled up carpet, just back from the cleaners. 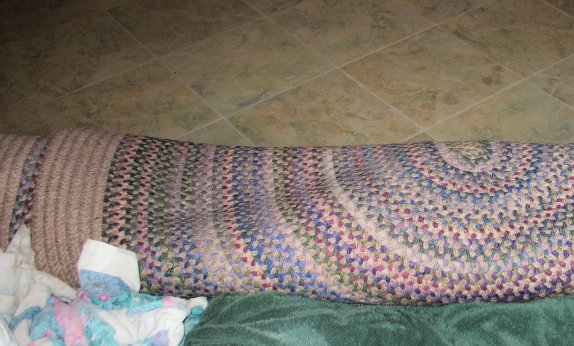 I’m just glad he didn’t try to shave it.
Posted by bluzdude at 7:34 PM