Didn't She Almost Have it All?

I was all set to write a nice, easy, breezy story about my adventures last night at Sitcom Kelly’s party.  No fuss, no controversy, just tales of drunken debauchery and child care.  Then the poster girl for Downward Spiral had to go and kick the bucket.

We were having a wonderful time at the party.  As you may remember from my post in October, Sitcom Kelly is providing foster care for a 3-year old dear of a girl.  It was initially supposed to last a month or so, but conditions change quickly.  I believe the next hearing for the birth parents comes up in March, so Kelly has had her all this time.

The little peanut is bright, playful and just plain adorable.  She enjoyed her time in the spotlight last night, getting all the grownups to play with her toys with her.

At one point, Kelly told her, “Go ask Mr. Bluz if he’ll play ‘Don’t Spill the Beans’ with you.”

She didn’t actually say anything, but she looked up at me and batted her pretty almond eyes and gave me a shy smile.

I said, “That’s good enough for me, I’ll be right there.”

The funny thing is that I was concerned with not knowing how to play “Don’t Spill the Beans.”  I told everyone, “I’m Italian!  I never spill the beans!  Omerta!”

It really didn’t matter, because when you’re 3, you don’t worry about trying to balance the beans on the lid of the swivel-pot.  You just put all the beans in the pot and then flip it over, with great gusto, while squealing.  The harder the flip, the further the beans get thrown around the room.

After “Don’t Spill the Beans,” we moved onto “Candyland,” which I DO remember how to play.  That didn’t matter either.  Three-year old rules say that you pick a character, push him along the entire path until the end.  Then you throw all the cards on the ground and look for the cards that have the treats on them.  Then you put your guy on the picture of the treat on the board, and squeal.  The squealing seemed to be an integral part of the game.

When the games were done, we grownups sat around yakking and it turned out I was a minor celebrity.  (Very minor… like “Oh, that’s you…”)  Some of the party guests had heard about the Sitcom in Sitcom Kelly and were surprised to realize that I was the guy that was enabling her delusions writing the Sitcom Idea Document with her and blogging about her virtual adventures.  This turned into a discussion for the benefit of the newcomers in the room, who did not know about their host’s alter ego, or the Pits in the basement.  Judging from the reactions in the room, we would be on the right track if we somehow produced this show.  The ideas killed.

So the party was toodling along when one of the guests had her phone buzz and then exclaimed, “Oh my, Whitney Houston’s dead.”

I said, “You have an alert set up for Whitney Houston news?”

Turns out she received a text message from a friend.

It was funny because I had just seen a piece on Whitney Houston on Friday, on one of those entertainment “news” shows.  They showed her looking like hell, with focus on these marks on her legs.  They said it looked like some kind of splatter but I thought they looked like needle marks.  Granted, I was at the computer and not paying full attention.  But I’m pretty sure they said something about her going to rehab.

Anyway, as you know by now, she died Saturday afternoon of a drug overdose and was found in a Beverly Hills hotel bathtub.  To me, that sounds like the 21st Century version of Elvis.

I’ll put this out there… I was never a huge Whitney Houston fan.  It was nothing personal, owing more to my general distaste for pop music than anything she did.  I will certainly admit that she was drop-dead gorgeous and had talent out the wazoo.  And I’m keenly thankful for all the Whitney Houston records, tapes and CDs I got to sell over the years when I managed the record stores, which helped me make my sales projections whenever she had a new album out.

But boy, did she ever take a fall.  Someone with her talent should have been mining gold for the last 15 years. She could have been making records and touring and raking it in hand over fist, rather than stuffing drugs up her nose and slumming it with her ghetto trash husband.  In her more recent attempts at performing, her voice was shot.

Maybe she really is the Elvis of our time.

In the 90s, she was a hit machine, then once she got married, she seemed to lose relevance and along with that, her talent.  Her last genuine hit was “I’m Your Baby Tonight” from 1990.

Her version of the National Anthem, sung lip-synced at the Super Bowl in 1991during the first Gulf War, was brilliant and set the bar for future renditions.  No one has come close.  I know I sold the single hand over fist.

She didn’t release another record until 1998 and only two more in the 14 years after that.  Her last album, from 2009 reached #1 on the Billboard charts, but only sold 2.5 million copies worldwide.  (Her albums sold in the tens of millions in the 80s.)  (I will also grant that sales of all albums are a shell of what they once were, due to the new music technologies.)

On her last two albums, (plus a Greatest Hits), she hasn’t had a single reach higher than #70 on the Hot 100 chart.  So a #1 album with a #70 single tells me that a lot of people with fond memories of the Whitney that Was, bought the album when it was released.  But the songs didn’t stand up.

We know she tried acting in the 90s but that didn’t really work out.  She was in the hit movies “Waiting to Exhale” and “The Bodyguard,” the latter of which made bank on the strength of her song, “I Will Always Love You.”  But did you ever see the movie?  She couldn’t act.  She had range of basically two faces… narrowing eyes and being pissed off, and narrowing eyes and pretending to be lusty.  Meh…

Next thing you know, the years have rolled by, drugs and booze have taken their toll on her instrument, and she’s doing a low-rent reality show featuring her dysfunctional family.  Shows like that succeed because people like to look at how messed up famous people are and then enjoy how much better off they are themselves.

It shouldn’t have had to come to this.  She had it all… looks, talent and limitless opportunity.  She had name recognition and status that would open any door she chose. 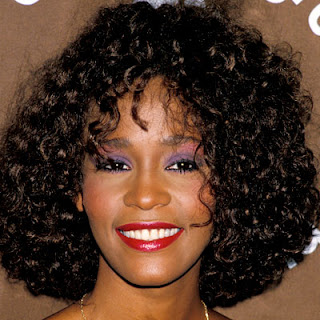 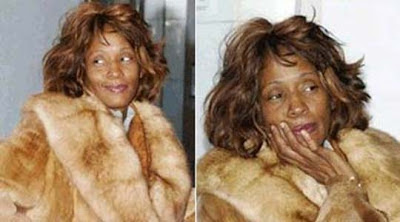 WTF?  Whitney after years of drug and alcohol abuse.

Yes, I know that age is a factor, but not the biggest one.  She had the assets to remain stunning well into her later years.  But drugs and alcohol take it right out of you.  It’s like Indiana Jones says, “It’s not the years, it’s the mileage.”

Just goes to show that when all your friends and business partners tell you that someone is no good for you, perhaps you may want to listen.

Otherwise, you may just be the next lump of wasted potential found in a hotel bathtub.

Rest in peace, Whitney.  I hope you find the peace that you never found while you were here. 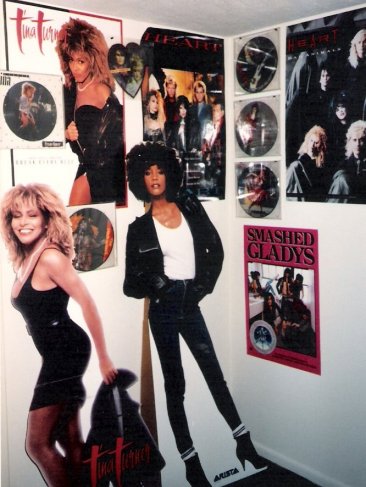 The “Ladies Corner” of a back bedroom from one of my old Cleveland apartments, circa 1990.