All My Ignorant Friends are Coming Over Tonight

I had one item I was going to write about today, but it’s been a really weird week for the Republicans, so I’m going to have to widen my scope.  It’s all part of being a full-service blog for you.  You’re welcome.

Last week, Dave Mustaine, lead guitarist for the metal group Megadeth, shot his mouth off during a concert in Singapore, saying that President Obama was responsible for staging the theater shooting in Colorado and Sikh temple shooting in Wisconsin.  He said that it was part of a ploy to mobilize public sentiment so that he could ban guns.  Yes, really.

I had no intention of writing about it, because that assertion is so preposterous, I wrote off the comment as being the result of 25 years of headbanging and substance abuse.  But yesterday I read that country doofus Hank Williams Jr. also contributed some stellar political insight during his show at the Iowa State Fair.

Hank was quoted as saying, “We’ve got a Muslim president who hates farming, hates the military, hates the US and we hate him!”  I’m sure there was a “Yee-haw!” in there somewhere too.  The comment was reportedly met with loud and enthusiastic cheers.  I’m meeting it by taking this opportunity to clean out my MP3 player a bit. 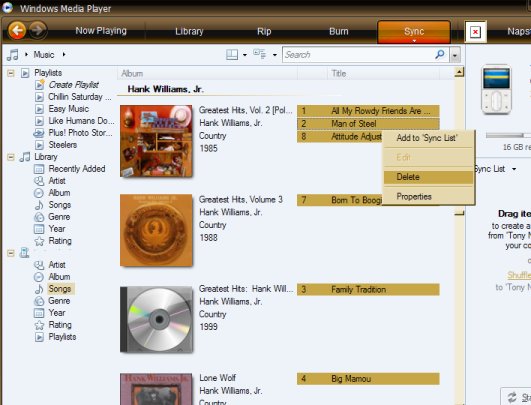 Hank, you are now free to join Ted Nugent in the Recycle Bin.

Apparently, “A Country Boy Can Survive” getting canned from a high-profile ESPN job for comparing the president to Hitler, but all he has left are gigs like the Iowa State Fair.  I wonder if they pay him in corn…

So let’s break down all the standard conservative fallacies about our president that are in play here.

Apparently this is because he has a funny sounding name, once lived in a country with a lot of Muslims, and has been falsely accused of being born in Kenya.  (Next thing you know, they’ll be talking about why he’s never released his split times in the 10,000 meters.)  Nope, there is no measurable evidence of Obama being Muslim.

Even if he was a Muslim, he’d be a pretty bad one.  After all, not only does he skip getting down on his knees and praying toward Mecca five times a day, he escalated American military operations in Afghanistan, had scores of Muslims (al Qaeda) killed via CIA drones, including the Big Hummus Pita himself, Osama bin Laden.  Does that sound like the work of a secret Muslim?

Not to anyone other than Fox “News” and the rest of the Right who so desperately want to believe it.

“…who hates farming…”  He hates farming?  Seriously?  How can anyone hate farming?  Isn't his wife growing vegetables in the back yard?  Sounds like farming to me.

Perhaps Bocephus is talking about Obama calling for cuts to farm subsidies, which has nothing to do with “the family farm,” and everything to do with needlessly propping up the giant Agri-businesses.  Republicans talk a lot (now) about debt reduction; they just don’t want it to come from the bulging coffers of big business.  Much better to cut food stamps, after-school, and women’s health programs.  I guess allowing the free market to prevail includes maintaining the flood of taxpayer money to giant farming conglomerations.  [More sarcasm font]  Poor Hank must be confused.

“…hates the military…”  Why would that be?  He’s been using the military quite effectively, and has been trying to do something to help all the returning vets.  Perhaps Hank has this idea because Obama never served.

Of course Romney never served in the military either, nor did any of his silver-spooned offspring.  Does he hate the military too?  Oh, that’s right… the Republicans love the military by default.  It’s the Democrats that are the long-hair hippie lovers.  Just ask Max Cleland.  (Cleland is the former senator from Georgia that had both legs and an arm blown off in the war, then lost his seat to Saxby Chambliss in 2009, who publicly questioned his patriotism during the campaign.)

“…hates the US…”  Of course!  Anyone that hates his country will turn his life upside down to run for president, become a target of vitriol all over the media, get blamed for things that happened before he was president, have credit removed for the good things that came afterwards, all while endeavoring to make things better for every-day lunch bucket Americans.  Come to think of it, maybe he should hate the US, or at least the fucking hypocrites that damn him if he does and damn him if he doesn’t.  He should hate the people obstruct every action he tries to take, while complaining that he isn’t getting anything done.  But he’s a better American than I.

“…and we hate him!”  Of that, I have no doubt.  Yee-haw.  It’s much easier to hate than to take responsibility for ones own lot in life. 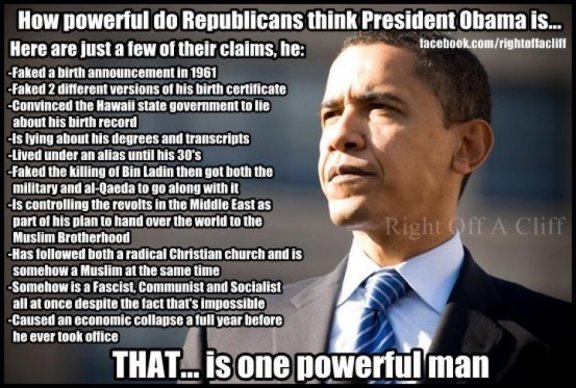 I was going to end things there, but today’s news was chocked full of more Republican shenanigans.

** As if to prove that they are incapable of moving the nation forward, the national Republican party platform shot down acceptance of gay civil unions.  This isn’t marriage, this is civil union, which would guarantee hospital visitation, survivor’s rights, insurance coverage and the like.  This stance isn’t just a religious objective, it’s the denial that gays are even people.  One day, history is going to look back on these clowns and it will resemble how we look back at Alabama in 1964.

** Then there’s also Rep. Akin, (R-MO) the boob that brought “legitimate rape” into our national lexicon.  He’s backtracking now on the language he used, but that’s irrelevant.  It’s the thought process behind the language that’s so insidious.  Once again, some middle-aged white Republican man claims to know what’s best for a woman’s body, while butchering all known science on the subject.  (What does he think they have in there, teeth?  Quicksand?  A mousetrap?)

The Republicans are upset now because he just brought more attention to the matter.  The fact is that they are once again including a plank in their platform that calls for bans on abortion with no exceptions, even for incest or rape (“legitimate” or otherwise.)  Their callous indifference to the lives and health of women should shock and appall the entire country.  No matter what one thinks about the matter, it’s a stunning conceit that someone else’s morals and judgment should replace that of those involved.

** As the presidential campaign heats up, I’ve actually been laughing about this. Have you heard the Romney and the Republicans complaining about theDemocratic ads?  I’m laughing my ass off.  The Democrats finally sac up and use the same tactics the Republicans have been using for years, and now they want to cry about it.  Romney’s own primary campaign left a trail of scorched earth behind him, such were the ruthless smears against his opponents.  It’s fun to watch a bully get hit in the mouth by his former prey.

All I can say is that he must have something really toxic in his tax returns, and the Democrats know it.  If he’d prefer to take the heat he’s under now rather than release his returns, how bad would it be if he did?

I’m just glad that the Democrats have at long last, taken the gloves off and went after these guys.  They’ve finally learned that a high-minded, principled campaign gets you 2nd place and a buttload of campaign debt.  Candidates that go big and go negative win, and once you’re in office, everyone forgets how you got there.  (Unless, of course, you rig the system, stack the election boards with your people and get the Supreme Court to hand you the job.)

** Lastly, I saw a blurb about how the Parents Television Council is complaining now about “implied nudity” on TV.  They’re complaining about people appearing naked, but with their naughty bits obscured by props, sheets, or pixilation.

So now they’re upset at the idea of people being nude?  Here’s some news for the Parents’ Television Council: everyone on TV is nude right now, just under their clothing.  Let’s start writing those letters to the FCC right now.

These clowns would write in to protest nude panty hose.  Repression, thy name is the Parents Television Council.
Posted by bluzdude at 7:28 PM