I don’t know if you realize it or not, but today is a pretty noteworthy day.  If you live in the Eastern US, you might know what I’m talking about, as your life might have been changed forever by the event.  For it was one year ago today that we experienced

The Great Eastern Earthquake of 2011. 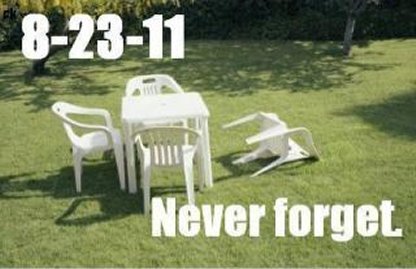 May we have a moment of silence, please.

I can speak from personal experience as to the life-changing experience.  It was in a moment of frustration, as a result of stepping in for our vacationing Disaster Response guy during a time period that contained an earthquake AND an approaching hurricane, that I undid three months of physical therapy on my shoulder by hurling a fistful of napkins at my cube wall.  Afterwards, I was only too happy to turn Disaster Response back to the proper department. 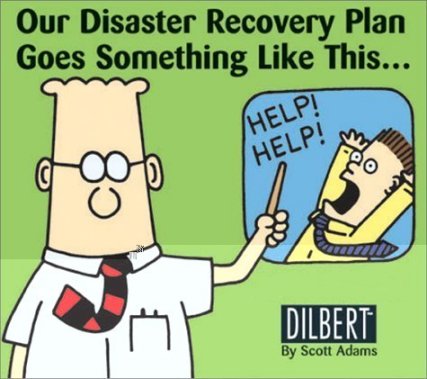 Now here we are one year later, and there is still earthshaking news rattling around the Baltimore area.  It seems that an Eastern Shore bar has forsaken both the Baltimore Ravens and the Washington Redskins, and become an official Steelers bar.

I heard about it on the radio, as the morning show jocks (and other listeners) started complaining about it.  Here’s the situation:

Let me start with what the Eastern Shore is… The Eastern Shore is that little slice of Maryland on the eastern shore of the Chesapeake Bay, across from the mainland.  It’s a haven for crabbers and watermen in the central area, and is a primo vacation spot towards the south, where there is exposure to both the bay and the Atlantic Ocean.  (This is where Ocean City is.) 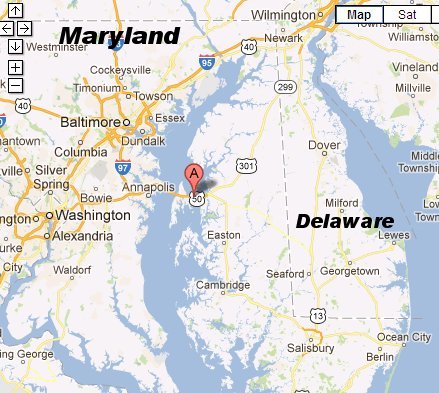 Anyway, a Chesapeake Bay dockside bar called the Red Eye Dock Bar has been trying to draw people to watch pro football there, but to no avail.  As you can see from the map, their location is equidistant between Baltimore and Washington, so you’d think that there would be plenty of fans of both teams to keep the place afloat on Sundays.

While they do a bustling business during the summer, the Eastern Shore is only really hopping during the summer.  During the fall and winter, it’s just the locals that are out and about.  So while they tried to drum up Sunday business to support the home teams, the locals just weren’t biting, preferring to stay home and watch the games on TV for free.  In order to keep doing Sunday business, something would have to change.

Into that void stepped a local Steelers Fan Club.  Apparently they had recently lost their home base bar and were in the market for another.  They approached the bar owner and proposed that in exchange for making Red Eye’s a Steelers bar, they would pack the place every Sunday during football season.

It was really a no-brainer.  A business needs real customers with real dollars to spend.  They can’t pay the bills with home town spirit, so the owner accepted the deal, thus igniting the subsequent shit storm.

This morning as I lay in bed listening to the radio, I was severely tempted to call in and try to talk some sense into the morning show jocks, (but I didn’t want to spend 20 minutes on hold).  Instead of complaining about the “traitorous” bar, they should complain about the people that didn’t show up!  You can’t blame the bar for trying to drum up business.  Say what you will about Steeler fans, but their money is as green as anyone else’s.  You want to lay blame, lay it on the Ratbird and ‘Skins fans.  Of course, the station is not going to blame their listeners when there is another scapegoat available.  But that doesn’t make it right.

I will acknowledge, though, that one of the jocks made the above point, and tried to talk the other ones down off the ledge.  But I just had to laugh...  Steeler fans strike again!  There’s nothing like causing discord in enemy territory.

Red Eye’s is not the first Steeler bar in the area; there are actually several.  Back when I first moved here, my brother and I used to go to one on the south end of town.  There were a couple of problems with this place, which kept me from going back.

First, the owners and customers seemed to spend an inordinate amount of time living in the 70s.  I mean, I appreciate Terry and Franco and Lambert and Swann as much as the next guy, but I prefer to dwell on our current team.  The 70s-era Pittsburgh Steelers Polka should remain there.  I’m more interested in the newer fight songs.

Most of the time, I don’t need to go to a sports bar at all to see a Steelers game in Baltimore.  Usually there are at least 10 out of 16 games that will be on regular TV, between the national games, the 2 against the Ratbirds, and any other game where the Steelers aren’t on directly opposite Baltimore.  This year, for example, I expect that all but 4 games will be on TV.  I work it out as soon as the schedule comes out in May.

As you may have seen in prior posts, I have a regular sports bar, Jilly’s, that I frequent when the Steelers aren’t on TV.  Technically it’s a “Ravens Roost,” but they have all the games on, and fans of all teams come in to watch.  It’s kind of a fun, multi-cultural event.  Sometimes I go even if the Steelers ARE on TV, just because I always have a good time.

While watching a game among a large, like-minded group has its benefits, (fewer fights), there’s also something to be said for a little friendly smack talk.  In the 7or 8 years I’ve been going there, I’ve never seen a fight or even a serious quarrel.

OK, I’ve had to out-smack talk a couple of local goobers once in a while, but that hasn’t been much of a challenge.  The ones that talk a lot of crap aren’t usually that bright.  And if they have a point, I’ll agree with them.  If my guys screw up, I’ll be the first to admit it.  And the bar owner and bartenders love me.  I’m always polite, I eat, I drink and I tip well.  They also know I’m not out looking to cause (much…) trouble.

That’s another thing about the old place we used to go.  The bar across the street became a “Ravens Roost” and the next thing you know, there were bottles flying back and forth after the games.  I’m sorry, I want to root for my team, not become an extra in the Mid-Atlantic version of “Roadhouse.” 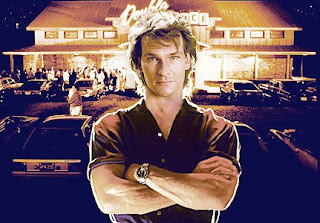 “Sorry Ray-Ray, no felons allowed in.”

Anyway, I wish Red Eye’s Dock Bar all the best.  And I hope the Eastern Shore chapter of the Pittsburgh Steelers Fan Club showers the place with cash.  If the bar owner does his part… like bring in some IC Light and Rolling Rock, put some pierogi and giant sandwiches with fries and slaw on the menu, and put some “Six-Time Super Bowl Champion” signs on the wall, and I’m sure it will all work out fine.

Just be sure to retire the Steelers Polka.