Why I Vote Democratic - Part 4

At the beginning of the year, I did a guest post at the now-defunct AskCherlock, in which I explained the reasons why I vote Democratic.  It was kind of a long piece, consisting of a list of chasm-sized differences between the two parties.  But even though the post was over four pages long (in Word), I felt like I wasn’t getting into the issues deeply enough.

I also wanted to run the material here too, so I figured I would take each item on the list and flesh it out into its own post.  I posted Part 1 on May 15th, Part 2 on July 26th, and Part 3 on August 14th.

So with the presidential campaign in full swing and Convention Season upon us, I continue…  Today’s topic doesn’t come from my original post.  Reading about what was said at the Republican National Convention put the next one right under my nose.

Disclaimer:  When I refer to “Republicans” here, I’m referring only to the national party leaders and political apparatus.  The same goes for my use of “Democrats.”  Local jurisdictions may vary and I have no knowledge or comment about them.  Also, my “Reasons” in this series appear in no particular order.

I didn’t watch the Republican Convention last night, but I had my twitter feed up on my iPad as I was watching less aggravating shows.  Speaker after speaker, I could see my feed blowing up, highlighting one malicious lie or distortion after another.  You can find a fuller list of full and partial mistruths, by clicking here.

The distortions are bad enough, but you can almost write them off as “politics as usual," because everyone will stretch a point.”  What I’m talking about is doing things like complaining about how Obama hasn’t made the economy better yet.  While it seems legitimate on the surface, it’s a distortion because is assumes that the president is working in a vacuum.

Obviously, the Republicans are glossing right over the (considerable) role they played in creating these harsh economic conditions, like starting two wars and keeping them “off the books,” the bank bailout, a massive prescription drug benefit, and of course, the infamous Bush Tax Cuts, which gave a few bucks back to the Middle Class, while slashing hunks off the tax bill of the top 1%.

Every time they talk about Obama’s “out of control spending,” they are willfully ignoring that right off the top, he put the cost of Bush’s Iraq and Afghanistan wars onto the books, where they should have been all along.  Also, the cost of the Stimulus package is counted against him, even though the circumstances that made it necessary were borne from the Bush era.  And even with all of that, you can still see that spending is hardly “out of control.” 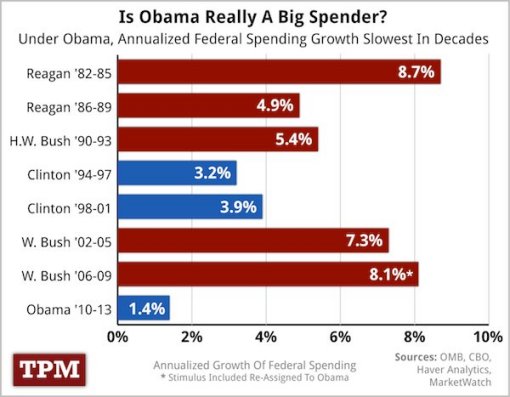 They also ignore their own opposition to and obstruction of every single economic remedy the president has tried to pass, not because it wouldn’t help the economy, but because Obama wanted it. 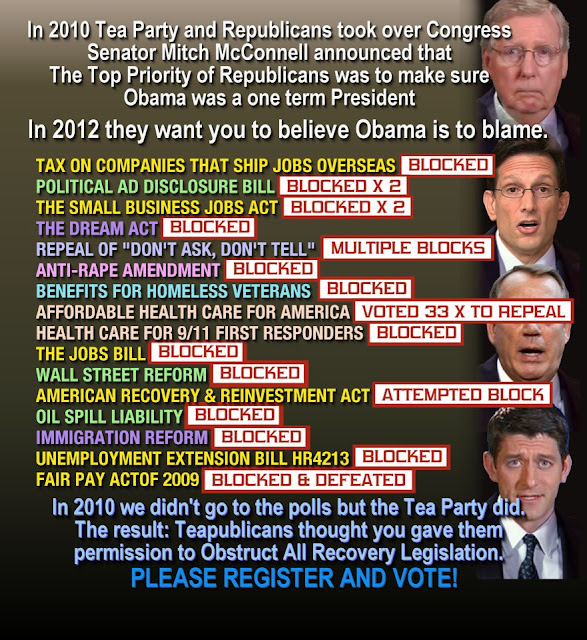 In my book, you don’t get to hold up every piece of legislation and then sit back and complain that nothing got done.  It’s dishonest and immoral.  Even kids on a playground know this is dirty pool.

But the thing that really sent my head reeling was Paul Ryan’s claim that Obama failed to keep a GM plant from his district, from closing.  Again, it sounds like a legitimate beef, right up until you realize that the plant closed before Obama took office!

Paul Ryan knew when the plant closed.  So did his speechwriters and everyone involved with the convention’s message.  They just didn't care.  He went right out there and told a bald-face, unequivocal lie to the American people and got applause for it.

Twitter erupted over that one, even including a tweet from former Michigan governor Jennifer Granholm, calling Ryan out on this blatant falsification.  Others also pointed out how the Republicans have the president set up in a no-win situation.

On one hand, Ryan criticized Obama for not doing enough (as a mere candidate for office, no less) to keep a plant from closing, while also criticizing him for the auto industry bailout, which successfully kept Chrysler from bankruptcy and saved a ton of jobs.  What the hell was the guy supposed to do? 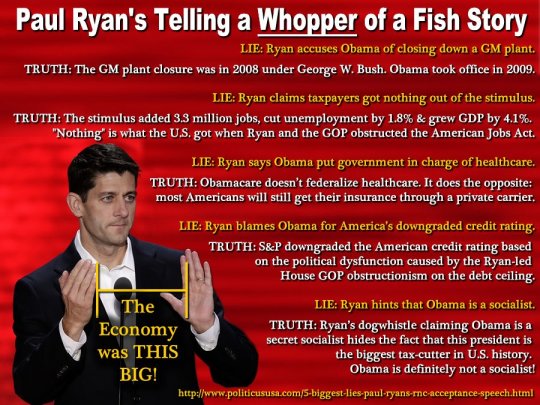 Unless you are an officer with a Fortune 500 company, the Republicans don’t give a rat’s ass about your troubles.  The only people they care about are the richest 1% in the country and they are willing to hold your life and livelihood hostage, in order see that their miniscule but influential clientele is served.  They are willing to lie to your face, misdirect your attention and play to your prejudices in order to get you to vote against your self-interest.

They are perfectly willing to let the country spiral down the tubes if it gives them a better chance to take back control of the government.  And THEN, they plan to bring back the same ideals that got us into trouble in the first place.  (Cut taxes to the wealthy and roll back regulations that keep those one-percenters from boning us even further.)

Even if it’s an idea that they’ve agreed with in the past (with video clips to prove it), if Obama is for it, they’ll tell you how they are now and always have been against it.  The idea’s merit is irrelevant to them; the only relevance is keeping the president from even the appearance of a victory, so that that they can use it against him later.  (Like, now, for example, when claiming he hasn’t fixed the economy yet.)

And these dipshits think we should put them back in office?  That’s like them borrowing a car, stripping it of all it’s useful parts and running it into a ditch and then asking for the keys back after you fix it.

These are not people that should be running a civilized country.  This kind of emotional and intellectual dishonesty is the 4th reason why I vote Democratic.  You should too.
Posted by bluzdude at 6:35 PM