This Saturday, I will hit a milestone with my job.  It will be my 15-Year Anniversary with the company.

How in the hell did that happen?  You know my background… I was a long-time retail troll.  How did I end up working for a financial services company when I had zero finance or accounting experience?  What a trip…  And it all started with getting fired.

OK, actually, it all started with my deciding to leave Albany NY in November of 1997, and trying to start a new life here in Baltimore, where my brother and sister lived.  My brother Ed offered to put me up while I got back on my feet.  I hated feeling like I was sponging off him and his wife, so I threw everything into getting a new job as soon as possible.

I managed to get hired by a mortgage company, by mid December.  Their ad said, “No experience necessary, will train.”  Now, I had absolutely no background for this, but I knew I could learn.  The job was compliance-oriented… mostly making sure every loan file had the required paperwork and signatures.  I was used to that sort of thing from my retail jobs, but it was tough, because it was like learning a whole new language.

They sent me to train for a week at their office in Virginia.  That was fine, except when I came back, I found out that they hadn’t even finished building their Baltimore office yet.  I basically had to sit at a desk and do nothing for a couple of weeks, while they built the place around me.

On the bright side, I had a PC and unlimited free time, so I was able to teach myself the basics of Outlook, Excel and Word.  Prior to that, I’d never even used a mouse before.

Once the building was done, it still took them another couple of weeks to get their business license.  So by the time I needed to start doing actual work, my training was but a distant memory.  I needed a lot of help to get re-started and I don’t think they liked that.  So right before the end of my 90-day probationary period, they let me go.

It pissed me off because things were finally beginning to click.  I was caught up on everything to date and was keeping up just fine.  I guess they didn’t have faith that I’d be able to amp it up.  I got even though.  As I mentioned in my Obituary post, this company want bankrupt within a year or two of my leaving, ending up as one more pile of wreckage I left in my wake.

But I was pissed at the time because I was totally screwed.  I’d just moved into my apartment in mid-January and was on my own.  I remember going home and calling my brother and asking, “So, are they hiring down at your place?  Because I just got canned.”

It was funny because my sister also got fired the same day at almost the same time as me.  From then on, we referred to that day as Black Tuesday.  Anyway, Ed said he thought there was an opening in the department run by a friend of his.  I told him that I appreciated the help, to let me know what’s up, and now I was going to get hammered.  And I totally did.

Cut to the next morning, about 9:30.  The phone woke me up from a painful sleep.  Head pounding, I answered the phone to receive an invitation to come down for an interview that afternoon.  I was like, “Damn, that was quick.”

I called Ed and he couldn’t believe it.  He said, “I just got back to my desk after asking him…”

So, I went in and met with Ed’s friend, Neil, who was the department VP, and then with Neil’s department manager, Kathy.  Somehow, I tricked them into hiring me and now here I am, 15 years later.  I started on March 23rd, 1998.  Unreal.

Before I even started, Neil relocated to the west coast, so I never worked with him.  I was assigned to report to Mary, who then went out on maternity leave two weeks after I started, so I was on my own pretty quickly.

Kathy ended up doing a lot of my training, which was funny, because once Mary came back, she then had to re-train me to do things right.  You can’t trust the executives with the day-to-day stuff, as I came to learn.

I started by doing a lot of data entry, entering retailer information into our brand new database.  This was some good luck, because the database and I kind of grew up together.  I worked closely with the app designer to come up with improvements as our business grew and changed, and we needed the app to do more things.  I helped figure out the best ways to use the tools we had to do what we needed to do.

Within a couple of years, our department grew from about 10, to about 30 of 40.  Before long, they put me in charge of 3 or 4 other people, to Team Leader of our “Dealer Setup Department.”  I was like, “How the hell did I just end up in charge of people?”  But I knew the database, and the best ways to get the inputs done.  And obviously, I’d spent a great deal of my career managing people in my record stores.

The influx of personnel changed our department, because that’s when all the fun people showed up.  That’s when my friend Jenny and my work-wife Sunshine joined, as well as a number of other young people.  Suddenly we had a regular crowd for what we called our Tuesday Night Wing and Beer Club. 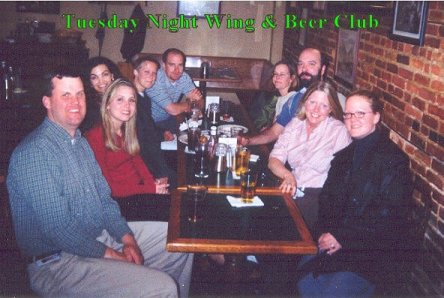 Thing started going south, before too long.  The more people you have, the more opportunity there is for infighting and backbiting, and our department was no different.  Plus, there was a group from an office in another state who were constantly trying to take over our duties, so there was a constant sense of siege.  A lot of my favorite people began to jump ship.  I also had a steady stream of ingoing and outgoing supervisors.

In 2005, they decided to pull me out of my Team Leader role and have me concentrate on writing procedures and handling projects for our boss.  They sent me to classes where I learned how to write procedures (in their preferred format).  Again, this was a good break, because it also taught me to be a much better writer; like I was taking a Grammar Refresher Course.

Then in 2006, I found out that the head of our unit decided to stop fighting the out-of-state people for control of our processes.  That was when I knew I had to start looking for another position.  Once your boss stops fighting for you, the game is over.  It would only be a matter of time.  (In fact, the department folded completely by the end of 2010.  It took longer than I’d anticipated, but still, if I hadn’t left, I’d have been laid off with everyone else.)

Again, I consulted with my brother, and he mentioned an open position in another department, the Director of which was another long-time friend of his (who I’d also known since I came to town).  The position involved emergency planning and disaster recovery, which again, was something I didn’t know beans about.

The manager of that department wasn’t impressed with my resume and hadn’t intended to pursue me, but the Director asked him to interview me anyway.  Once we met, I sold him on my adaptability and track record of learning whatever job I was given.  What really sealed the deal was that I had the procedure-writing background, which was something the prior guy in the job lacked.  That meant he could shuffle all his procedure writing over to me.  Bingo!

During the course of working in Disaster Recovery, aka Continuity of Business (or COB), my boss picked up responsibility for managing our fleet of cars.  (Our people whose job entails going from branch to branch all day, are all assigned company cars.)  So before long, it became my responsibility as well.  I handled the day-to-day stuff and he took care of the big picture items.

Then in 2011, the Director came to me with an “offer I couldn’t refuse.”  She had an opening and told me she was rewriting the job description so that she could give it to me. She wanted me to take over as sole Fleet Manager, as well as write the procedures and departmental communications.  Obviously, you can’t turn down a position your boss’s boss is designing for you.  And that’s how a guy that doesn’t know jack about cars became the manager of a whole fleet.

It’s funny how we end up in the places we do.  Do you think anyone could have predicted, back in 1983 when I was coming out of college with a degree in broadcasting, I’d be working for a finance company?  And after starting out doing data entry, I’d be managing a Fleet of cars, and writing memoranda for the whole company to see?

The best parts of running the Fleet are the titles.  Last month, my old COB boss referred an errant caller to me, saying that I was now the “Czar of Cars, the Regent of Rides, the Ayatollah of Autos, Viceroy of Vehicles,” and the Sultan of Sedans.  Personally, I prefer Admiral of the Fleet.  It makes for a pretty snappy business card.  And when I sign off on my procedure or memo-related emails, under my name, I list my positions as “Departmental Scribe.”  Now, even my boss refers to me as her “Scribe,” when she’s talking to others. 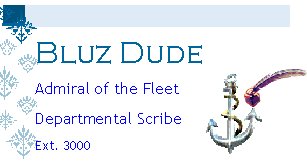 Fifteen years… it’s the longest I’ve been with any company.  I love my job and the people with whom I work.  I could never have predicted the path I’ve wandered.