I’m starting to think my Comment Spam problem is becoming worse.  I know I was getting the Spam over the weekend, but I was handling it as the day went on.  But I have it set up so that I get an email at work for every blog comment.  So when I went into work on Monday and opened my email, I saw this: 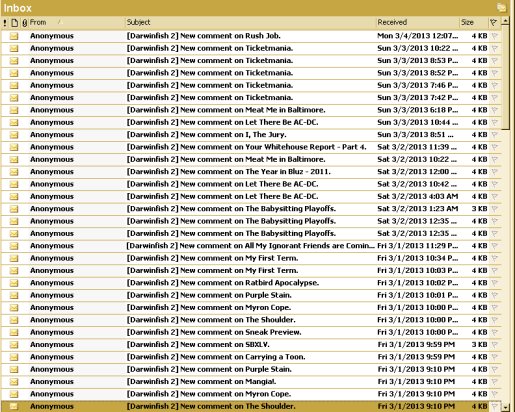 This is from Friday at 5pm to Monday at 8am.

Plus, there are 16 more that are out of screenshot range, running the total to 47 Spam comments. I couldn't help but channel a little Monty Python, as I went down the list and thought to myself, “Spam, Spam, Spam, Spam, Spam, Spam… Lovely Spam, wonderful Spam….”

Back in February when I mentioned my Spam comment infestation, with its insidiousness and mangled syntax, I said that they were not really leaving comments; I was just getting the comment emails.  I've since discovered that they are now leaving actual comments in about one fourth to one-third of the emails. Obviously, I don’t want their web feces smeared all over my blog, so now I have to go investigate every single email and delete the message.

They think I’ll give up. They don’t realize that I can be one stubborn S.O.B.

A Sinking Sensation
That’s some real shit about that sinkhole in Florida that appeared out of nowhere under some guy’s bed and the whole thing went down.  Holy crap!  What a way to go…  Sucked into a cavernous gaping maw of indeterminate depth.  Dude probably felt like he was a box of donuts in front of Rush Limbaugh.

I saw that they couldn't even recover the poor guy’s body, either.  The whole area was deemed too unstable to support the equipment needed for a recovery effort.  They basically had to knock down the whole house.

We were talking about it at work today, and wondering if some unscrupulous builder is going to put a new house up over the top of the site.  They were wondering if he would have to disclose what happened there.  I figured the only way he could sell the place is if he kept his yap shut about it.

My co-workers were howling. But I like meat too much to watch MY steak go crawling across the counter-top. 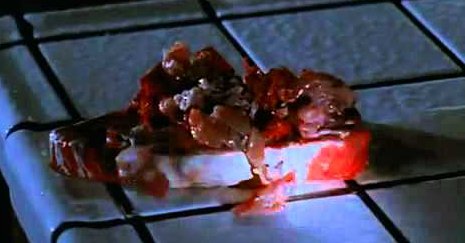 I have to wonder about the neighboring houses though.  If it were me, I’d want to get the hell out, pronto.  But how could you ever sell the house?  Who’s going to buy a place right next to one that got eaten by a sinkhole?

My prediction: The Republican Governor has the state buy up the property in the neighborhood and condemn it.  Then he arranges to have it sold to developers in about 10 years, after everyone’s forgotten about it, for pennies on the dollar.  Then the developer turns it into a mall, or casino, or something and appoints the ex-governor to their board.  There! Everybody makes out!

Well, except the taxpayers… they get it right up the old sinkhole, but what else is new?

Stormy Wednesday
We have a big storm brewing here for the east coast.  This storm has already dumped all over the Midwest and Plains States and is scheduled to meet up here with another system and run up the coast.  It’s supposed to start raining and snowing here tonight, and then change to heavy snow tomorrow, along with 20-25 mph winds.

Needless to say, I’m working from home tomorrow.  When they were talking about 1-5”, I was going to go in.  But when the forecasts started calling for 5-10”, sorry, I think I’ll dial in, wearing my jammies.

They’re calling this one, Snowstorm Saturn.  (On the Weather Channel, anyway.)  I’m not sure why they’re naming the storm after some shitty car, but I’m sure they have their reasons.  I wonder if they already used“Mercury.”  Or maybe “Pinto.”  I think “Gremlin” would make a good storm name, just because it kind of screws with people.

The Big Finish
I saw this in the comics this morning and it cracked me up.

Poor kid.  I'd write in and tell him that it doesn't get any better, but I’d hate to break the spirit of a fictional character.
Posted by bluzdude at 7:53 PM