All Photo-Ops Are Not Created Equal 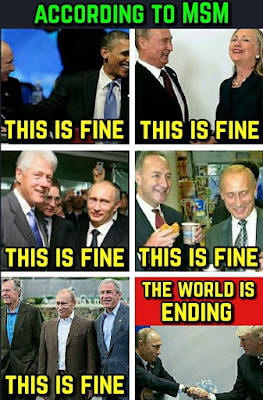 1)      It’s a president’s job to meet with world leaders, no question. You can see by each of the first five shots that these were informal photo-ops, not two leaders having secret meetings. And a shot of Trump acting like a comrade of old Vladdie wouldn’t have been a big deal either if that’s all there was. When all the leaders are pouring out of a G-8 meeting, people mix and pose for photos. That is indeed, fine.

2)      Prior to the first five photos, there hadn’t been overwhelming evidence shown that Russia had hacked private political emails and released them to damage one political party. Further, we hadn’t yet seen evidence that Russia had engineered a social media campaign to divide the country, sow unrest, and ultimately back one candidate over another. Also, Russia hadn’t forcefully annexed Crimea or sent fighter jets to counter our military operations in Syria.

3)      None of the people in the first five shots had a private, one-on-one, meeting with Putin, in which there were no witnesses (save for translators), and with no transcriptions of the meeting made available to the public or even other Cabinet members. All we know about what went on in that meeting comes from the comments of two seasoned liars, both of whom will tell whatever story suits their purpose at any given moment.

What we have here is another logical fallacy of false equivocation. Five of these examples are nothing like the last one, therefore any comparison is misguided. But the creators don’t care about that; they just want their base to get pissed off about it and blame the media.

This country is careening down a dangerous path right now, with all the drummed-up antipathy toward the media, social and otherwise. To this president, any media outlet that’s not fawning over him, not telling everyone what a great job he’s doing, is “The Enemy.”

Journalists are doing what they’ve been doing for centuries, reporting on what politicians do and say, and are receiving state-sanctioned death threats for it.

I’m certainly not the first to warn that the prosecution and suppression of journalists is a primary tool of dictators. I can’t understand why the Right, supposed to be so super-patriotic, is determined to shred one of America’s founding principles. Their tribalism run amok is stripping this country of the very greatness they pretend to revere.