Following last week’s Springsteen post, I wasn’t going to write about music again so soon, but then I saw this graphic on Facebook: 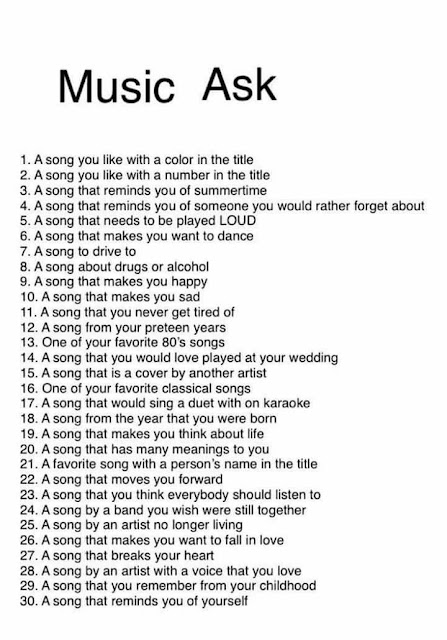 I thought it looked like the makings of a fun post, so what the hell, I thought I’d give it a shot.

Director’s DVD Commentary: I’m answering these as songs I like, even when not specified, and not just as a trivia test. I will list song/artist/album (when known) and my rationale. Many of these songs I’ve mentioned here before, so look for the links for additional information.

1)      A song you like with a color in the title: Still Got the Blues, Gary Moore, (title track). Also considered Back in Black, but I like this slow, smoldering, soaring blues number better. RIP Gary Moore. Also reminds me of those several months where I was a regular in a little Schenectady strip bar.

3)      A song that reminds you of summertime: Let’s Go, The Cars, Candy-O. I could really pick any song by The Cars. They were always a primo summer band to me. Lots of sunny-day, top-down music.

4)      A song that reminds you of someone you would rather forget about: The Dream, David Sanborn, Change of Heart. This was an instrumental jazz sax track that I always associate with that girl from Cleveland who put me through the ringer, both in the 80s and the 2000s. Nice song, but it’s impossible for me to separate the two.

5)      A song that needs to be played LOUD! Rock You Like a Hurricane, Scorpions w/ the Berlin Philharmonic, Moment of Glory. The power chords of the Scorpions meet the original heavy metal of a full symphony orchestra… this track ROCKS.

6)      A song that makes you want to dance: Shout, Otis Day and the Knights, Animal House Soundtrack. This was THE dance/party song of my college years. And of course, we all would do the “gator.”

7)      A song to drive to: Roll On Down the Highway, Bachman-Turner Overdrive, Not Fragile. There are so many good “driving songs,” but this one is a favorite. You want to know frustration? Being stuck in traffic when this one comes on.

8)      A song about drugs or alcohol: I Ain’t Drunk, I’m Just Drinkin’, Albert Collins, Cold Snap. Great party song that came out just after we stopped having Barn Parties.

10)   A song that makes you sad: Keep Me in Your Heart, Warren Zevon, The Wind. It hurts every time I hear it. This was the last song Zevon recorded for his final album, made while battling terminal cancer. And I have a tight association between this song and my late friend, Brill, who introduced me to Zevon way back when.

11)   A song that you never get tired of: Up to my Neck in You, AC/DC, Powerage. I had this album for over 20 years before I really paid attention to this song and now I’m obsessed with it, due completely to that long, slow-building, simmering and explosive guitar solo. I yearn for the days when we used to go all out on the “air-guitars” during barn parties. I would have nailed this one.

12)   A song from your preteen years: Spirit in the Sky, Norman Greenbaum, Title Track. From a very young age, I loved that nasty, greasy, grungy guitar lick. The heck with the smarmy “uplifting” lyrics, this had a grooooove!

13)   One of your favorite 80s songs: Hells Bells, AC/DC, Back in Black. This was the song that opened the door to me for AC/DC. Believe it or not, at one time I hated them. Hell’s Bells made me rethink my position and I’ve been rocking out to them for almost 40 years.

14)   A song that you would love played at your wedding: Some Kind of Wonderful, Grand Funk, All the Girls in the World Beware. As a matter of fact, I’ll be getting married next summer and if we were playing music, I’d play this song. So far, it’s the only “Our Song” we have. Why? Because when we first started dating steadily, I hugged her and said, “My Babeh!” Then she said, “Mah Babeh!” And we went back and forth going “Mah Babeh” like they do at the end of the song. The fact that she picked that right up told me I had found the right girl.

15)   A song that is a cover by another artist: Jumpin Jack Flash, Aretha Franklin, Jumpin Jack Flash Soundtrack. Also, the same song by Johnny Winter. Both artists put their mark on it. Aretha belts it out with funk and gospel choir backing vocals. Johnny tears it up with a lot of yelling and a wicked, high-speed guitar solo. (RIP Aretha.)

17)   A song you would sing a duet with on karaoke: Disorder in the House, Warren Zevon (with Bruce Springsteen), The Wind. I’d sing the Bruce part because it doesn’t require any actual singing. I couldn’t carry a tune with a forklift.

18)   A song from the year you were born: Hit the Road Jack, Ray Charles, (1961). I had to look up some songs from ’61 and among all the doo-wop and saccharin orchestral tunes, this was the one with the most “cool.” Brother Ray doesn’t play.

19)   A song that makes you think about life: You’ve got a Friend, Carole King, Tapestry. I had a hard time coming up with a song that makes me think about life. I ended up thinking about friends and how awful life would be without them. I have a number who would come running if I called their names, as would I if they called mine. That’s life. (OH! That totally should have been my song! That’s Life! (I’d go with the David Lee Roth version over Sinatra, though.)

20)   A song that has many meanings to you: Funeral for a Friend, Elton John, Goodbye Yellowbrick Road. I wrote a whole college paper on what I heard in this instrumental. It was the combination of mourning the loss of a loved one (during the slow/sad parts) and the fond remembrance of good times past (during the upbeat parts.) This was a favorite of my late friend Brill’s and mine. That he passed so young made the song all the more poignant to me.

21)   A favorite song with someone’s name in the title: Johnny B Goode, George Thorogood, Live: Let’s Work Together. As George calls it, “The Rock and Roll National Anthem.” Chuck Berry basically invented rock and roll with this song.

22)   A song that moves you forward: Ride On, AC/DC, Dirty Deeds. Who would have thought I’d find inspiration from these guys? But once, long ago, while feeling sorry for myself in a far-away hotel room, this blues ballad picked my ass up and stood me back on my feet. Got me moving again.

23)   A song you think everybody should listen to: Tanqueray, Johnny Johnson, Johnny B Badd. I have many of these, but this is one of the coolest songs I ever heard, yet hardly anyone knows about it.

24)   A song by a band you wish was still together. Don’t Pass Me By, Georgia Satellites, Open All Night. No question that the band was going to be the Satellites. It’s a cryin’ shame they only cut three albums. This was my favorite, a cover of an old Beatles/Ringo Starr song that they totally raved up.

25)   A song by an artist no longer living: Pride and Joy, Stevie Ray Vaughan, Texas Flood. This song sent my musical taste in a whole new direction. One song, one time. I was hooked on SRV and the blues.

26)   A song that makes you want to fall in love: Moondance, Van Morrison, Title Track. First time I heard it was in the movie “American Werewolf in London,” during the love scene. Made me want to go take a shower with a cute nurse, immediately! (This activity proved to be more romantic in theory than in practice.)

27)   A song that breaks your heart: Into the Fire, Bruce Springsteen, The Rising. As mentioned in last week’s post, I bought the CD based on seeing Bruce and the band play it in concert (on TV). It’s still hard to listen to because it never fails to bring back the feelings of 9/11/2001.

28)   A song by an artist with a voice you love: Bat out of Hell, Meat Loaf, Title Track. Possibly my favorite song of all time. Powerful vocal performance amid pounding piano and howling guitars. I think Meat is the greatest rock singer of all time.

29)   A song you remember from your childhood: Zorba the Greek, Herb Alpert and the Tijuana Brass, Going Places. I remember tons of songs from my childhood but this was a favorite. It’s a whole party in four and a half minutes. No wonder Greece is in such bad shape. Who can get anything done with all the dancing and “Yiiiiiiiiiiiiiiiiiii-yip-yip-yip?”

30)  A song that reminds you of yourself: Oreo Cookie Blues, Lonnie Mack, Strike Like Lightning.
“Chocolate on m’fingers/Icing on mah lips
Sugar diabetes and/Blubber on mah hips
I keep the night light burnin’ in the kitchen, baby
So I can go downstairs and cruise…
I got da Oreo Crème Sandwich, Chocolate Covered Cream-Filled Cookie Blues.”