We’re living in an unprecedented time. Never, in the modern era, have we seen one party working publicly and aggressively to rig an election. The Republicans flat-out don’t care what people say about it. They have the Justice Department under their thumb, with an Attorney General who will do the president’s bidding without question. They have governors who are doing the same. They have packed courts to allow whatever suppression tactics they can dream up.

Think this is an overstatement? It’s not. It’s the inevitable conclusion of multiple documented acts on the part of the Republicans:

·        Trump has spent the last year publicly denigrating the concept of voting by mail, (except where he does it.) He calls it rife with fraud, despite there not being any fraud found in the past elections of the states that have had unrestrained mail-in voting for years. This sets the table for later.

·        Then he appointed a Postmaster General who immediately began hampering the Post Office’s effectiveness by removing mail collection boxes, mechanical high-speed sorters, imposing overtime limits, and mandating that trucks leave at a particular time, rather than when they were properly loaded. The goal is to delay mail delivery so as to interfere with the mailing of ballots. The cover is a claim that they’re trying to cut costs. But no one yet has been able to answer how removing automated sorting machines (and sometimes destroying them) cuts costs. Machines don’t get overtime or even regular-time.

·        He encouraged voters in North Carolina to vote twice, just to see if their system was strong enough. Aside from this being a felony, he’s continuing to sow the seeds to backstop his objections later on.

·        He openly pressures other countries to provide political assistance or ammunition (true or otherwise) to use on his opponent.

·        In the face of overwhelming evidence that Russia did and continues to influence voters and hack political opponents, he has done nothing to admonish or punish them in any way. In fact, his administration actively covers up evidence of their activities. Hell, Trump and his officials are sending out doctored videos their own selves.

·        To that end, they’ve ended in-person Congressional briefings on the subject, so that they don’t have to answer questions or even hear concerns.

·        The Attorney General is holding onto the “Durham Report” until just before the election. This is the report he requested to investigate the FBI’s investigation into Russian interference. It’s done, but he’s holding it until he can drop it right before Election Day, (so by the time anyone can look into the shortcomings and improper conclusions, it will be too late.) Essentially, they’re trying to duplicate the Comey statement on Hillary that came in late October of 2016. AG Barr is already on record as summarizing the Mueller report in terms describing the opposite of the report’s conclusion. There’s no telling how skewed his own hand-crafted report will be.

·        Everything about his COVID-19 activities results in voter suppression. They decided early on not to help the big blue states like New York and California. They thought that the more sickness and death in Democratic states, the fewer there are to vote against him. From March to June, he did nothing to stem the spread of the coronavirus in cities, alternately pretending the virus will go away, or that it’s just not that bad. After he threw pandemic planning to the states, he had the Federal Government confiscate supplies purchased by those states. He even criticized Maryland’s Republican governor for obtaining a planeload of COVID tests in secret, so they wouldn’t be commandeered. (Maryland is a rare Blue State with a Republican governor.)

·        In all locations, Trump and the GOP refuse to provide money for essential and low-level workers while pushing for them all to go back to work. He knows they’re putting their life on the line to go to work and he’s counting on a lot of them ending up too sick to vote, or just dead.

·        He’s gathering a force of 50,000 “poll watchers” to show up at polling places and contest votes they think are fraudulent. (Given their lack of access to records, how do you think they’re going to conclude someone is attempting a fraudulent vote?) It’s a show of force to intimidate people of color into not voting. This is a tactic that a government mandate expressly forbids Republicans to use until recently, when a federal court revoked it, saying it was no longer necessary. When Republicans last tried this back in 1980, they recruited off-duty cops and other military men in order to be as imposing as possible. This will be the perfect role for Trump’s camo-clan 2nd Amendment Warriors.

·        He sent a no-name paramilitary force into Portland and other Democrat-run cities, for the simple reason of creating campaign footage of riots and cities in flames. Peaceful protests don’t serve his purpose of scaring people, so he had to ensure there would be a riot. Before that, he had a similar military force beat and tear-gas peaceful protesters, from in front of a church, so he could pose for his Backward Bible photo-op.

·        He’s delaying new citizenships from taking effect. People who started the process at the beginning of the year, have completed all of their assigned steps to citizenship, are hearing crickets from the government. The last thing Trump wants is a bunch of non-native Americans voting. Naturalized citizens or not, they’re still foreigners to him.

·        There is now a fortified wall around the White House, a wall that has been unnecessary for over 200 years. History has shown that it’s not there for security purposes. The Secret Service is more than well-enough equipped to handle trespassers. But it makes sense to have a barrier in case the President decides not to honor the results of an election that removes him from office. 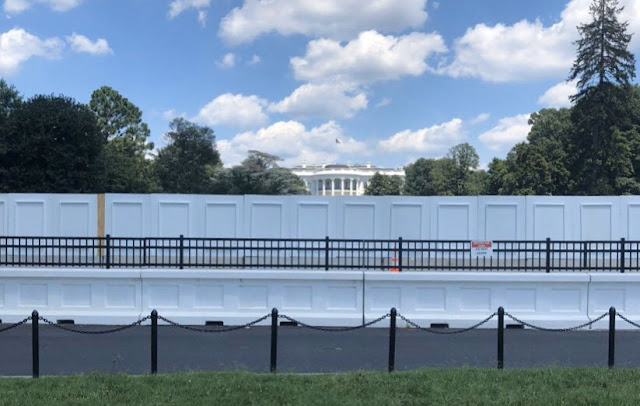 (Source)
Trump knows that once he loses the protective bubble-wrap of the presidency, the New York State Attorney General and maybe even the new US AG will be after him like puppies after a pork chop. So he will do everything in his power to remain in that bubble-wrap for as long as possible, consequences (like fair elections) be damned.
·        Republicans are actively working to get Kanye West on the ballot in a number of states. It’s already too late for him to be included on the ballot of a bunch of states, thereby nullifying any chance he has of winning. But yet people close to the president’s campaign are still trying to get him on ballots. The only rational interpretation is that they’re trying to siphon off black votes from Biden, via this stunt.
·        All of the voter suppression tactics at the (Red) state level for the last 8 years, like
o   hand-picking voter IDs designed to be least used by Democrats
o   then closing the stations in their neighborhoods that issue them,
o   decreasing the numbers of voting machines in the same areas to ensure long lines,
o   eliminating polling precincts in Democratic areas, to ensure long lines
o   limiting early voting and mail-in voting, to ensure long lines,
o   and a special nod to Florida who after voters approved an amendment to let freed ex-felons vote, required they pay all court fees before they could register. (ie. A modern poll tax.)

Any one of these actions might be dismissed as a misunderstanding of intent or error in judgment, but taken together, there’s only one logical conclusion. This president will stoop to any level to retain power and he’s surrounded himself with others who will provide aid and cover.

And these points don’t even cover what may lie ahead. I certainly think that there are more plans afoot to contest votes in every conceivable way, or discredit any jurisdiction that doesn’t exhibit sympathy for the cause.

I’ve read a number of analyses that predict Trump will declare victory ASAP on Election night when the bulk of the in-person Republican votes are counted but the mail-in Democrats’ votes aren’t. That’s where all the early work to discredit mail-in voting will pay off. He’ll convince his base that he won fair and square and any future votes counted to the contrary must be fraudulent. It’s a scary proposition.

Our only recourse as of now is to vote as early as possible, preferably without relying on the mail. I intend to take my absentee ballot to a dropbox. After that, it’s a leap of faith to hope that it’s properly counted. Some states are trying to change their procedures so that they can start counting mail-in votes earlier, but states run by Republicans will never allow that.

Only in a landslide will we be able to drop the curtain on this circus of an election.

One Quick Note
I would be remiss if I didn’t address the “suckers and losers” quote unearthed from Trump this weekend.

First of all, The Atlantic must have had that down cold, or else they wouldn’t have published a bombshell story like that. Four separate sources provided the story. Yes, they were anonymous, but in the Era of Trump, can there be any other kind? We all see what happens to those who publicly tell the truth about Trump. They get harassed, threatened, doxed, or fired. Who in their right mind would claim to be an anti-Trump source? It’s the Right’s way of sowing mistrust onto every media source but Fox and the like.

And that made so much richer when a Fox reporter was one of the three independent media outlets that confirmed the story (along with the AP and Washington Post.) So that’s four journalistic entities confirming a story provided by four witnesses.

That, my friend, is air-tight. They have it right.

Naturally, all Trump apologists can do is claim they’re wrong anyway and “Nah-nah-nah-I’m not listening!”

I’ve already seen a meme going around Facebook saying, “Gee, I have four anonymous sources that say Biden”… something or another.

This person clearly doesn’t understand actual journalism. Souces, confirmations, double-checking. That’s what real news outlets do, as opposed to Fox “News” who just runs anything that helps Republicans or hurts Democrats, and worries about accuracy later. Or never.

Man, the Fox brass must have been pissssed about their own reporter backing the story. I refuse to believe it was a change of heart on account of the network. Hannity and Carlson have too much ass-kissing equity invested in Trump to turn on him now.

This is the opportunity for Republicans who truly honor the military to detach themselves from this crazy train. After this story, one can “support the troops,” or support this president. There is no rational way to do both.