An Abdication of Duty

As if Trump needed any additional evidence of his incompetence to surface before Election Day, especially right on the heels of his “suckers and losers” debacle, last week Bob Woodward provided audio tapes of the president talking about what he knew about the coronavirus back in February.

Unfortunately, the president kept that informant from the nation and downplayed the seriousness of the virus, both in scope and deadliness. He said they had it contained. He said it wasn’t that serious. He said it would go away by April, and then by summer when it got hot. But not a thing he said was true and he absolutely knew that.

In another taped interview with Woodward, Trump told him “I wanted to always play it down. I still like playing it down, because I don't want to create a panic." This, from the guy whose stock-in-trade is promoting panic to help him get elected; panic over immigrants, Muslims, gays, Antifa, Black Lives Matters, socialism liberals, and whoever else he can whip into Boogieman of the Month.

This single act of deflection on coronavirus constitutes a grave failure at a president’s single most important job requirement: protecting the American people.

But he thought it was more important to prop up the illusion of a strong economy, and therefore, the stock market because he just wasn’t smart enough to realize that this virus was going to devastate the economy if left unaddressed.

This treasonous act is the most profound error of his entire term because it would have changed the course of our existence as we live right now. We’d be about done with COVID like the European countries are. (If not “done,” then on a whole different plane. And certainly not gaining 10,000 cases per day.)

I recall a Facebook meme sent around by liberals that posited that if Hillary had been elected, we wouldn’t be in this mess now. I disagreed. I think it would be better, sure, but there would have been major resistance from the Trump fan club because they’d be resisting anything a President Clinton would want to do. We’d still be polarized on masks.

Now if Trump had come out hard for distancing and mask wearing, testing, and tracing, like the other civilized countries, there would have been nowhere near the resistance to masks that we have now. And if everybody united to stay home, distance and wear masks, for as long as necessary, (instead of until they got bored), we’d have come out the other end on this thing months ago and I’d have been enjoying college football this weekend.*

More importantly, if he’d have taken action, we would have at least 100,000 families that wouldn’t be grieving right now.

So now, because they can’t admit they elected a vainglorious idiot, his fan club has to come out and defend the indefensible. This time, they can’t complain about anonymous sources because it’s Bob freakin’ Woodward, the gold standard for investigative reporting since 1974. And they can’t claim Trump was misquoted because he produced the audiotapes (that I presume are free from manipulation. I presume that because Woodward doesn’t play that shit, like a two-bit hustler like James O’Keefe. That, and no one, not even Trump, has complained that the audio was manipulated.)

They tried though. White House press secretary Kayleigh McEnany said, “The president has always been clear-eyed with the American people," she said, claiming Trump "never downplayed the virus."

All the White House Press had to do was quote from the transcripts: Trump: "I wanted to always play it down. I still like playing it down, because I don't want to create a panic,"

With those customary excuses shot down, Republicans are left to claim that it’s Woodward’s fault because he should have leaked the tapes earlier.

That has a grain of truth, in that Woodward could, indeed, have raised the warning months ago. However, he’s an author trying to sell his book and Trump is the fuckin’ president of the United States. It is literally Trump’s job to warn the public of an immediate and easily avoidable threat.

But even an earlier warning from Woodward wouldn’t have done much… Trump’s base would still be scorning preventative measures because freedom and manly stuff and they don’t wanna. The only thing that would have changed our current predicament is Trump doing his job in February and letting the experts formulate the national strategy. All they had to do was run the playbook left by the Obama Administration. Hell, he could still take credit for it all later, right? I mean, he’s taking credit for any success the governors who acted responsibly had, isn’t he?

Yes, he is. Every time he spouts off about how great his response to COVID was, he’s talking about a plan to throw all decision-making to the states. The governors who didn’t listen to the crap coming out of the White House and took action are on the down-slope of COVID activity. The Red States, who pretended there was no problem, are all hot spots. I read over the weekend that the Dakotas lead the nation in COVID positive test rates. (Thanks Sturgis!)

Trump also tried to blame China to Woodward. He said, “The virus has nothing to do with me… It's not my fault. It's — China let the damn virus out."

Again, technically true and not in dispute.  But that doesn’t excuse not taking action. It’s not up to China to combat the virus within America, it’s up to the American federal government and our president abdicated that duty.

And now a word from aging white men on Facebook: 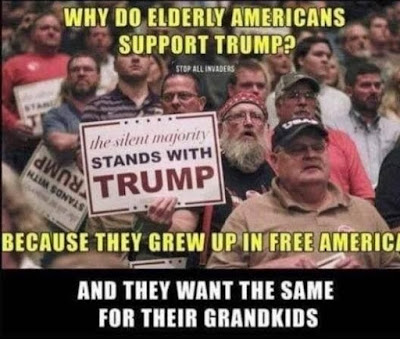 And what I want for MY grandkids is a functioning Social Security system. Keep electing Republicans and that’s gone, and Grandma and Grandpa are out on the street. You make the choice… some amorphous idea like “freedom,” as defined by racist idiots, or a program that we’ve paid into all of our lives, that keeps retirees from starving or losing their houses.