Last week’s game attire delivered a Steelers win, so I have that gear to keep under advisement. I can’t use it today because I won’t be watching the game at home. There are different rules for different locations.

Today’s game is on opposite the Ratbirds so I have to go out to watch it. Last year I went to watch 4 games at Jilly’s, my neighborhood sports bar, and the Steelers won them all. I wore something different each time so I don’t have any trends to go on for today. While a previous year’s mojo doesn’t necessarily coincide with that of the current year, it does provide a starting point.

The downside of going to Jilly’s is that it is a “Raven’s Roost” bar, so Ratbird fan presence will be high. Also, the audio feed will be for the Ratbirds game so I’ll have to pay close attention to my game. This can be difficult sometimes because with all the games going on simultaneously, there is something to see everywhere. I ascribe this to one of Murphy’s Laws: “Anything requiring complete attention will coincide with a compelling distraction.”

I can usually count on some smack talk from the Jilly’s crowd and I don’t shy away. I’m never one to walk in and get in people’s faces but if people start with me, I’m ready. This year especially, I’m bulletproof. Just won the Super Bowl and Stanley Cup… Steelers beat the Ratbirds 3 straight games, including in the AFC Championship Game… what can anyone really say? “Steelers suck?” (the usual)

Normally I don’t go the game jersey route at Jilly’s. The one time I wore one there, we got squashed, so that put me off the jerseys right then. I usually go with the polo or rugby shirt option and have done pretty well. Hats are also in play, so I have that choice to make as well. I never take the Terrible Towel to Jilly’s. That is reserved for my knee when watching the game at home, or attending the game.

On game days (or the all-important Friday before) I tend to shy away from gear that celebrates recent championships. Talking championship is cocky and cockiness gets the karmic smack down more often than not. It’s sad because I do love to wear the championship stuff, so for the sake of the mojo, I only wear it off-season or earlier in the week.
So here’s what I’m going with today: Black polo with yellow shoulder stripes, black hat, yellow bill w/ 2 black stripes and my Steelers socks. 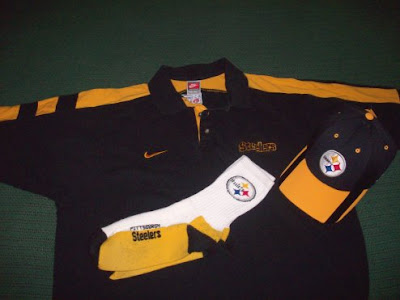