The Evolution of the BluzMobile

I’m in the process of buying a car this week.  Let me start by saying that I’ve never been a “car guy.”  I’m not into having the latest or greatest in self-transportation… I just want to get from point A to point B reliably, and it helps if it’s comfortable.  And the stereo is loud.
I learned to drive in a big, yellow Jeep Wagoneer.  We named it “Jaundice.”  (I knew another guy with a green one that he named “Algae.”)  Jaundice was indestructible… it used to belong to my Grandpa and had navigated many rough Pittsburgh winters, with its high wheel base and AM-only radio.  (Unfortunately, we couldn’t get KDKA from northwest Ohio.)
I loved driving that Jeep and would have happily done so for years.  My buddies and I used to go out terrorizing in it during my high school years, as did my brother later on.  But it was the family car and I would need one of my own to drive back and forth to college every day.  So what did my dad get me to drive in the face of the brutal northwest Ohio winters?
A 1976 Honda Civic hatchback…  Front wheel drive, 5-speed manual transmission, manual choke knob, baby-shit brown. 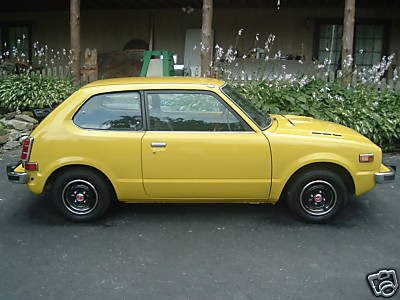 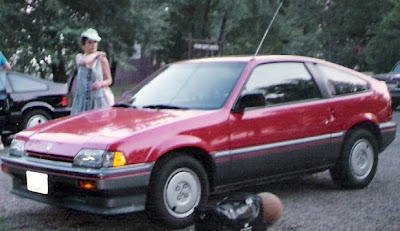 My little red roller skate, back when it was new.
The car did surprisingly well in the snow and there was a lot of it.  After Cleveland, I drove it for my entire time in Albany.  I beached it once, due to the low clearance.  I thought I could get up my driveway but that ridge of snow left by the last plow pushed the wheels right up off the ground.  Luckily, the car was small and light enough that I was able to free it without having to summon the Future Ex from the house.
The thing that always bothered me was that about 6-months after I bought it, some motherfucker gouged their key around 3 sides of it, while it was in the parking lot behind my apartment.  Pretty much broke my heart.  I never knew who or why, leaving me with a great deal of rage and nowhere to direct it.  And worse, I never got it fixed.  I had a guy paint over it once, while the was in the shop for something else, but I never had the money to have it done right, nor the time to be without a car.  So every time I saw those scratches, it would piss me off all over again.  This is why we can’t have nice things.
Regardless, I drove the CRX for 13 years.  I definitely got my money’s worth out of it.  I drove it until I moved to Maryland and found I couldn’t get it to pass inspection without a major overhaul.
I’ll continue the story with the next post, which will include 2 Neons, a Maryland Transit Authority Sting Operation and the car I’m buying now.  Stay tuned…
Posted by bluzdude at 6:42 PM