The Evolution of the BluzMobile - Part 2 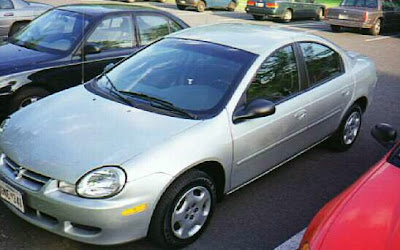 It wasn’t until I got this car that I noticed how many silver cars are on the road.  Seems like 1 out of every 5 cars you see is silver.
So I’ve been driving my silver, stripped-down Neon for 8 years now.  I’ve had to replace the battery a couple of times and have the trunk fixed because it was leaking water that was winding up on the backseat floor.  Oh, and I had to have a new door put on because it got broken into in the subway parking lot.  Fuckers pried the top of the door away from the roof, unlocked the car, and then pulled out the ignition core.  I found it on the floor of the car.  They must have been disturbed in progress because the cops said it didn’t take much more than a screwdriver to start the car, once the ignition core is removed.  Since then, I bought a “Club”, for security purposes.
Anyway, I only drive the thing 6 miles a day… from here to the subway and back, with occasional trips to the store or around town...  maybe a trip to Pittsburgh once a year.  Over 8 years, I only put  just under 4,000 miles a year on it.
But last month, I fell into an opportunity to get a much nicer car, a Chrysler Concorde, the same age but with only 21,000 miles.  Naturally, it's silver too. 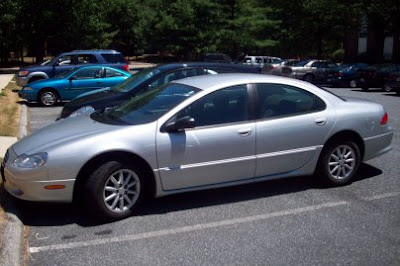 My new baby!
The price is good and I should get about half of it back when I sell my Neon.  (At CarMax… I am avoiding the hassle of selling it privately!)  It’s got cruise and power locks/window, and is in general, a much nicer ride.  Finally, a Big Boy car!
It also has automatic transmission.  That will be an adjustment.  I’ve been driving a stick every day since 1979.  There have already been some moments when I find myself waving at a gearshift that isn’t there (the shifter is on the steering column) or pawing with my left foot for that non-existent clutch pedal.  But I’ll get used to it.  It’s already proven much more beneficial in bumper-to-bumper traffic jams.
My big decision will be whether I replace the stereo or not.  Unbelievably, this one has a cassette player too.  I have an adaptor where I can plug in my DiscMan, which I usually only do on longer trips.  I’d like to have one of those CD/MP3 stereos put in, so I can carry my whole catalog around where ever I may roam.  But it would probably get stolen.  And I do have to get my rear end icons transferred:

I just got my papers in the mail, so next stop will be the helpful folks down at the DMV.
I sure hope it’s not a hassle.
Posted by bluzdude at 6:40 PM