A Red, White and Bluz Weekend

As mentioned in the posts below, my family spent the 4th of July weekend at Amelia Island Plantation, in celebration of our parents’ 50th wedding anniversary.


The trip started with a near miss at the airport.  We were there in plenty of time, but unfortunately, we were at the wrong gate.  Who knew Southwest would have two flights to Jacksonville scheduled 10 minutes apart?  Fortunately, I figured it out in time and got our butts to the proper gate just in time to walk into line and board the plane.  “Thank you, travel gods!”
Mom and Dad were driving out from Pensacola so we landed a good 2 hours before they could come get us.  We killed some time in the Chili’s in the airport and walked around a bit, then before too long, we were in the car and heading to the resort.
Amelia Island is about 45 minutes northeast of Jacksonville, just across the Intercoastal Waterway.  (Hence, “Amelia Island”)  The Amelia Island Plantation is a huge, sprawling facility with all condos, a big hotel, different shops and restaurants, a spa, places for water activities like fishing, kayaking, plus bicycling and walking trails.  I loved the trees there… these ancient gnarled trees with moss dripping down from them. 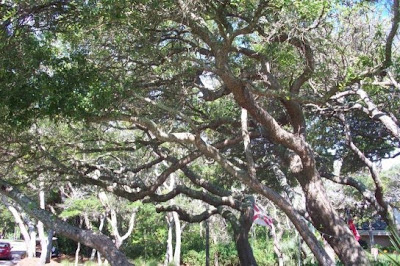 The moss was hiding in this picture.
As the bellhop got our gear loaded, I could see Dad was loaded for bear.  It looked like he was planning for one of our old Cleveland football trips.  Besides our suitcases, he had three boxes of booze, mixers, sodas and water.  I could see it was going to be a good trip.  And I figured I’d better take some notes because I might not remember much when it was done.
I realized immediately that bringing our own drinks was a brilliant idea.  When you checked in, they gave you a card with which you had to use to make any purchases on the grounds… services, meals, drinks, activities, etc.  When you’re not parting with actual cash, it doesn’t seem so bad when you sign everything to your room, no matter how overpriced.  Also, they factor in the 20% tip right into the bill (where applicable).  I didn’t mind that so much because the service was generally fantastic.  I’d have been tipping them 20% anyway.
We all got our own rooms at the hotel.  Pinky and I had a room on the first floor, in front of the pool.  My parents were just around the corner.  My sister and her husband were one floor over us.  My brother and his family were on 5. 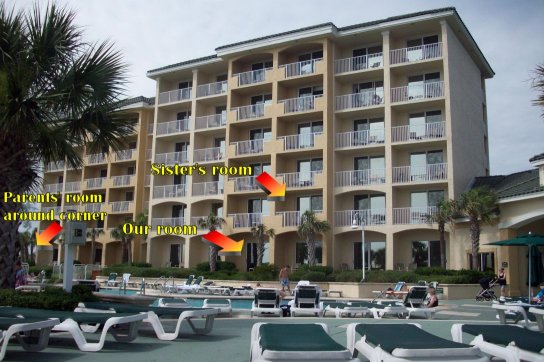 All of our rooms had nice patios, upon which we could sit out and chill. 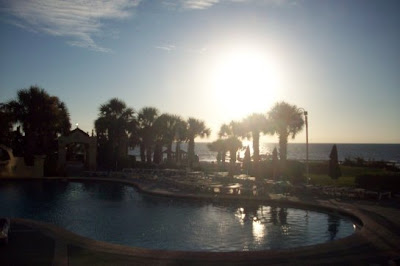 Sunrise as seen from our patio.
You know, they shouldn’t have such great restaurants in a place where you’re supposed to walk around in your bathing suit.  I felt like a beach ball the entire time I was there.  (Note: I gained 10 pounds in 5 days.  Now I have my work cut out for me to lose it again.)
But we had fun with it.  Our first meal there, Dad actually tried their designer “4th of July Pina Colada” that was made to be red, white and blue. 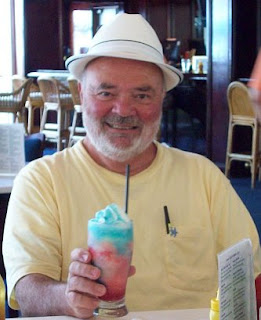 This, from a man whose most adventurous drink endeavor in his whole life has been putting flavored vodka in his vodka and tonics.
Quote of the Trip, Part 1
My brother Ed: “The man that invented the cupcake was a genius!  You have a cup… and it’s filled with cake!” (Dramatic “arms out” gesture…)  (Yes, he was serious.)
I decided it was the breakfast buffets that did me in.  I usually don’t eat breakfast so any intake is more than I normally have.  But I mean, how many calories is it for a couple chunks of fruit?  Not that many?  OK, then what about the omelet from the omelet bar?  And the pancakes?  And croissant?  And sausage links and stacks of bacon?  All right, never mind.  I did have some fruit though; that was my nod to nutrition for the weekend.
We spent 3 of the 4 days at the pool.  Actually, there were two pools… the lower one house most of the little kids.  That left the upper pool (the one outside my room) for us and other random families and teens.  We played a lot of Monkey in the Middle.  Daniel made an excellent monkey.  His Uncle Scott said at one point, “Daniel, you’ve been a monkey for an awfully long time…”
To which I piped up, “11 years, to be exact.”
It wasn’t his fault.  His Uncles cheat.  OK, his Uncle Bluz cheats.  I told him my mantra point blank, “Age and treachery always beats youth and exuberance.”  I would put my hand on his shoulder or latch onto his waistband to keep him from jumping for the ball.  Or I’d sweep his legs out.  Or box him out of the way.  Or just toss him out of the way when the ball was coming.  Age and treachery, baby!  It’s a wonder he even played with us.
Throughout the weekend, we talked a lot about music.  He’s working on loading up his I-pod and is becoming very interested in AC/DC tunes.  This is right in Uncle Bluz’s wheelhouse.  I told him I have every song they’ve ever done and know most everything about them.  Big mistake.  He proceeded to ask me questions about everything… how old they are, who plays what, what happened to the old singer, how old were they when they started… Anyway, I wrote down a list of songs I thought he might like and told him to check out the videos on YouTube, then let me know which ones he wanted.  Boy plays his cards right, I can start melting those ear buds but good!
We spent the 4th of July itself on the beach.  It was a beautiful clear day but the surf was really pounding.  My brother rented some boogie boards and he and his boys had at it. 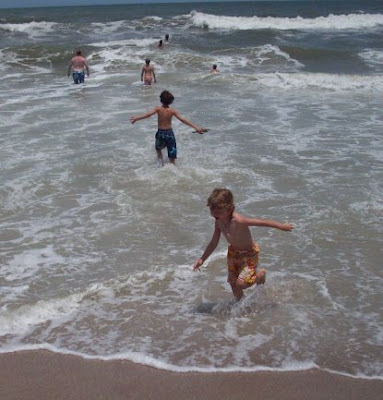 Sam bugs out while Daniel waits for the waves.
Well, Sam was a little more cautious.  He mostly played in the outer edge of the surf, but still could scoot along on the board for 20 feet or so.
Daniel and his Dad got tossed around pretty good.  I told Daniel, “You always have to respect the waves.  They have no conscience and no pity.  They don’t care if you just got pelted, they’re coming to dump on you again.” 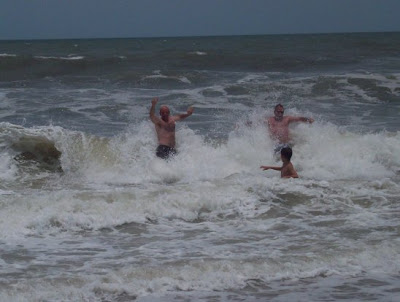 Ed, Daniel and Uncle Scott get pounded.
But nothing bad happened in the surf… it was the beach that drew first blood.  My folks headed up to the room… Mom was going to rest; Dad was bringing back some beer.  Unfortunately, they didn’t think to take their shoes.  This was probably about 1:00 and the sun was blazing.  The walk across the sand softened them up and by the time they got onto the boardwalk, it was actually burning their feet.  Mom has trouble with her feet as it is and doesn’t walk very fast any more. 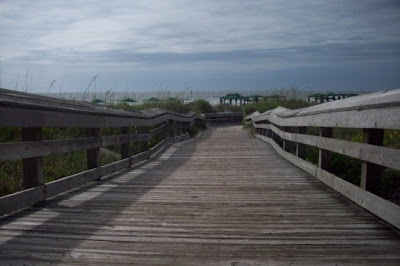 The Amelia Island Boardwalk of Death.
Just as Dad was about to pick Mom up and make a dash for it, two Spanish-looking women came up and sensing their distress, offered them their shoes.
“What about your feet?” my dad asked.
“We can walk a lot faster,” they answered.
And so the day was saved by a couple of Spanish angels.  You know, I hate to complain, given the lawsuit-happiness in this country, but the resort should really address that.  They could have some kind of sprayer to keep those boards cool, or maybe coat them in something that didn’t act like freakin’ Teflon.  Or, just post a sign that says, “Hey Dummy!  Go back and get your damned shoes!”
Speaking of other irritations, I want to know why, in an atmosphere that’s highly conducive to sunburn, would a resort provide soap that has bits of oatmeal in it?  For fuck’s sake, I’m getting toasted out there and you’re giving me sandpaper to wash up with??  WTF??
Anyway, Bluz Sister got some lotion on Mom’s feet and all was well.  But they stayed put for the rest of the day.  And they didn’t even have to miss out on the day’s entertainment.  There was an air show, right over the beach, that features five different kinds of planes doing various tricks.  Now I couldn’t name you one if my life depended on it, but there was a red bi-plane and a bomber and a little white one that only weighed 800 pounds (which is less than some passengers on my flight)  and a couple others. 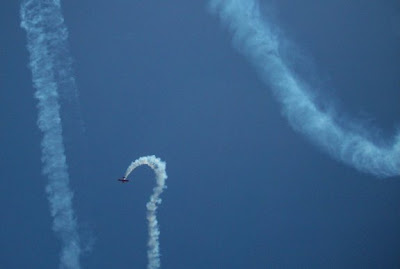 The Red One.  I couldn’t get very good pictures because my zoom blows. 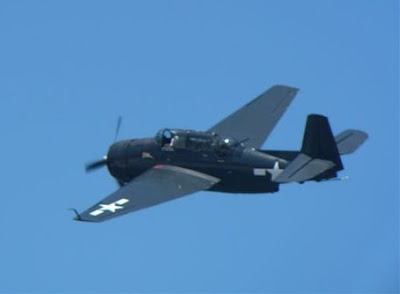 Bomber, courtesy of Bluz Sister-in-Law, who has a much better camera.
The folks could see the whole show from their patio and even hear the commentary over the PA.  It was especially cool when they had one of the pilots on the mic as he was doing all kinds of loops and turns.  Dude was from Alabama and was all, “Woooooooooo!”
Later on that night, they had fireworks, again, right from the beach. 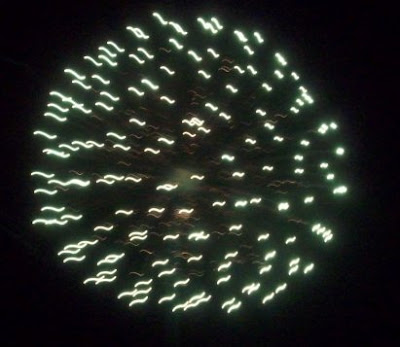 I have no idea how they were able to make a Fireworks Blowfish.
But before that, we had a stellar dinner at the hotel and the servers brought out a special dessert for the distinguished Guests of Honor. 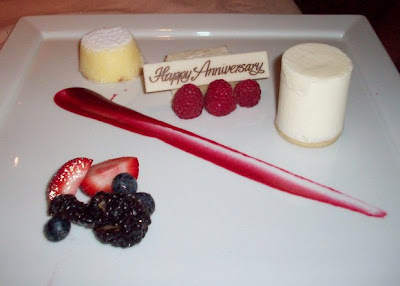 It may not look like much but it was fantastic… berries and 3 kinds of cheesecake.  Everyone got a taste.
Quote of the Trip Part 2
My mom was talking about how her mother didn’t like to wear underwear.  She and her sister, as girls, would tease Grandma about it, going, “Mom, how come you’re not wearing any underpants?”
Grandma replied, “If you wanted kissed, would you wear a veil?”
End of teasing, Mom said.
Amelia Island is also a hotbed of turtle activity.  Every night, you’d see these big turtles come walking up the pavement, on their way to their nests in the bushes.

First time we saw one; it looked like an old WWII army helmet laying on the walkway.  Then it started to move.  They must be pretty well conditioned to people… they didn’t deviate much out of their paths when kids came around. 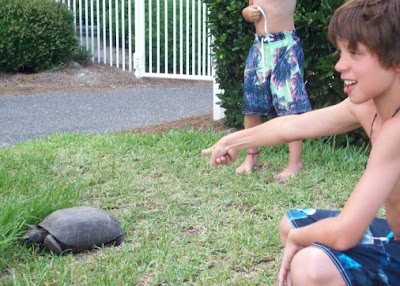 "That helmet has feet!"
I hated to see Tuesday morning come.  For all the things Amelia Island Plantation offered, all I really did was hang out by the pool and ocean.  Every day was like, breakfast, pool/ocean, shower, gather for drinks in Mom and Dad’s room, go to dinner, gather for nightcaps, go to bed.  Repeat.  Sometimes lunch would replace breakfast.
But that’s what I like to do.  Like I’m going kayaking???  Not bloody likely.  I wanted to spend every moment I could with my family.  We so rarely all get together and when we do, it’s not usually for more than a football weekend.  So this was pretty cool.  I totally didn’t want to leave. 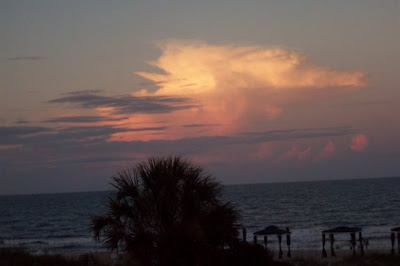 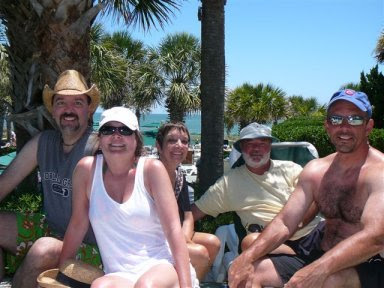